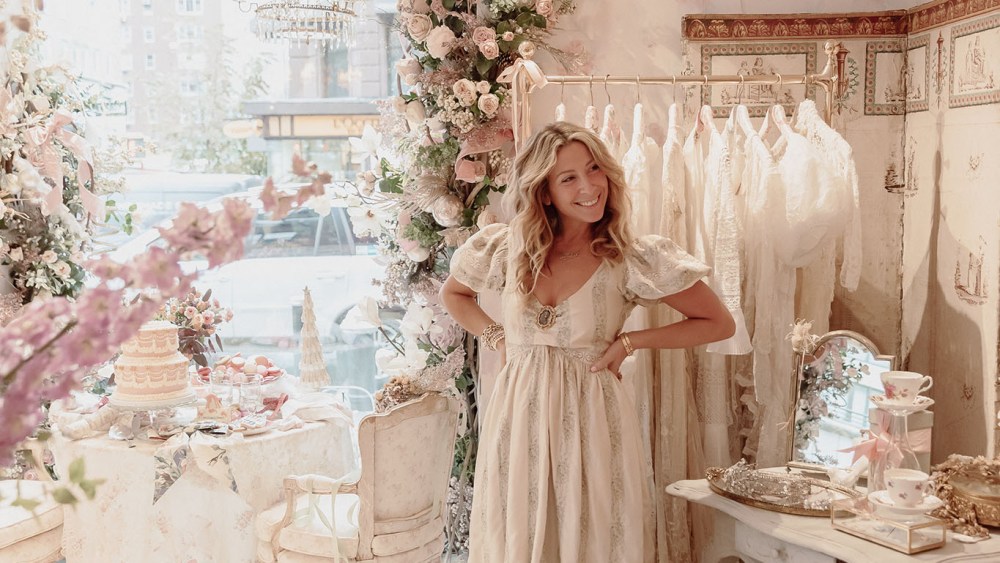 The founder of LoveShackFancy on Monday opened the doors to a romantic jewel box of a boutique on the corner of Madison Avenue and 80th Street, the neighborhood where she grew up and one that she still cherishes.

Her passion for the city and the brand she created seven years ago is contagious. The stage is set by the ornate moldings and elaborate floral arrangements on the exterior of the space and continues past the pink rope into the 1,000-square-foot interior. Once inside, the fairytale plays out in real time with vignettes for holiday entertaining, dreamy dresses, vintage bridal, special gifts, collaboration product and one-of-a-kind outerwear pieces. “We wanted to create a beautiful, magical escape,” she said, “a dream-like version of old New York where you can forget everything that’s going on — at least for a moment.”

She sought to do that through the delicate hand-painted walls in a light pink rose pattern at the front of the space, swag curtains and the antique pieces sprinkled throughout that were sourced from Dienst + Dotter — and all for sale. As a result, the interior will be ever-changing, she said, as these items are sold and replaced by others. The back half of the store features hand-painted floral wallpaper, dressing rooms and a “cabinet of curiosities.”

“We wanted the store to be for all generations,” she explained, “from little girls to grandmothers.”

This is not Hessel Cohen’s first New York City unit; there’s a second on Bleecker Street in Greenwich Village as well as an outpost in Sag Harbor. There’s also a store at the Royal Poinciana Plaza in Palm Beach, Fla. This summer, in the midst of the pandemic, she opened two boutiques in California: Newport Beach and Melrose Place in Los Angeles.

But this newest addition is perhaps the most personal for the former Cosmopolitan editor, who recalls how she would stop into the Betsey Johnson store next door to her new shop on her way home from the Nightingale-Bamford school a few blocks north.

“We always knew we wanted to open uptown and we had our eyes on this spot for a while,” she said. When it became available, she signed the lease in June. Although construction was slowed as a result of COVID-19 restrictions, Hessel Cohen pushed to get it open before the holidays. “We think a lot of people will be here and will want to be immersed” in the world she has created. “With all the vacant retail space, I knew I could transform it.”

She expects the store to attract mainly Upper East Side residents who haven’t escaped the city for the suburbs. “In this big city, it still feels intimate,” she said, adding: “We didn’t want to give up on New York. It may sound cheesy, but New York is my home and there’s still so much magic here.”

She admitted that it was harder to open the two California stores because of the pandemic. Originally, they were supposed to open in March — in fact, the company had a big, celebrity-studded celebration planned — but that had to be canceled. They eventually opened in June and July.

Hessel Cohen is frustrated that she was only able to attend the openings remotely and it took a while before she was able to travel there safely in person. The Newport Beach store is performing well and the Melrose Place unit has seen strong results when it hosts activations. “There’s very little foot traffic there,” said Stacy Lilien, president.

In New York, the Bleecker Street store has seen a pickup in sales since residents returned from their summer exoduses, and Palm Beach has also held its own.

Hessel Cohen said her husband, who is a real estate developer, has been working with Lilien to secure prime spots for the brand around the country including Highland Park Village, where pre-COVID-19, it could take five years to find a location.

Also in the cards is another potential unit in Florida and she’s considering opening the brand’s first international unit in London.

“But this one was the most important,” she said of the Upper East Side store.

The store will showcase some of LoveShackFancy’s new collaboration product, including a soon-to-arrive sleepwear collection with Morgan Lane featuring the brand’s signature prints as well as mother-daughter pajama sets. There will also be a new activewear capsule with Beach Riot, a West Coast-based brand, slated to launch in January.

In the case of both Morgan Lane and Beach Riot, she said they’re both female-owned labels that she has long admired and it was appealing to her that one was based on the East Coast and the other on the West, which is where her stores are located.

“In the beginning of COVID-19, we looked at what was missing,” she said, and that included an expanded assortment of cozy sweats, as well as sleepwear and activewear, the popularity of which was made evident when its collaboration with Bandier sold out in hours.

To further expand its reach, LoveShackFancy recently launched a bridal collection as well as a bath line, and its home products continue to attract customers. In the store, these are all offered along with some 20-plus third-party products hand-selected by Hessel Cohen that include Chanel purses and Fallon jewelry.

While physical retail will remain a hallmark of the brand, LoveShackFancy’s direct-to-consumer business has also been thriving during the pandemic, with June sales being the best in the history of the brand.

But for now, the focus is on the new Madison Avenue unit. If COVID-19 restrictions are not tightened, there are plans to host activations at the store after Thanksgiving and Hessel Cohen is eager to show off her newest creation to her neighbors. That includes the Christmas tree and train set in the window that could also appeal to boys instead of just girls. “But the train is pink,” she said with a smile.