The company is scouting for a West Coast location.

LoveShackFancy will open its third store, a 1,100-square-foot unit at Royal Poinciana Plaza, in December. The unapologetically romantic brand is simultaneously scouting for retail space on the West Coast and plans to open a location by the third quarter of 2020.

Rebecca Hessel Cohen, LoveShackFancy’s founder and creative director, said she’s had Palm Beach, Fla., on her radar for some time. “The mother of our head of design lives in Palm Beach. She goes out dancing, sandy-toed. I’ve been hearing about Palm Beach and this feels like a good time to open there.”

LoveShackFancy has a following in Palm Beach, Hessel Cohen said. “They appreciate this world in its most extreme form,” she added. “It’s sweet on steroids. The West Coast store will be a little edgier. It will have a vintage section. It won’t be as matchy-matchy as Palm Beach.”

The store, with a wisteria-covered facade, lattice-covered walls and huge floral bows in the windows, will have a ribbon haberdashery cart featuring different trims, and a miniskirt bar; a ruffled version was one of the first items Hessel Cohen designed, which retails for $175. “I found a pergola that I’m trying to fit into the store,” she said.

“I love prints and love mixing them. I take old world chintz and reinterpret it,” Hessel Cohen said about the decor of the Palm Beach store. “I spent time in England, in the Cotswolds in June, and it was just chintz, chintz, chintz. There will be a washed rose print and the inside of an armoire upholstered in silk dupioni.” 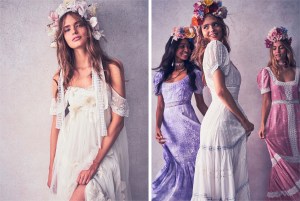 The upcoming resort collection will lean heavily into fancy with voluminous dresses, extravagant bows, plaid taffeta, gold lamé, sequins and tulle. Bridal in February will launch with 10 dresses that can be customized, which Hessel Cohen described as “Victorian, romantic, sexy and bohemian.”

Home products such as napkins, tablecloths, placemats, pillows and bedding will launch at the Palm Beach store. The company is grabbing opportunities such as swimwear, which is expanding with a cover-up collection, and nightgowns.

The brand identified the tween market as another untapped area. LoveShackFancy’s Mommy and Me line caters to toddlers. The company noticed that many tweens were buying the line, but the women’s XXS is too big, so girls sizes from 12 to 14 years will be introduced in upcoming collections.

There’s an emphasis on creating collections that are more in line with seasonal weather. The introduction of sweaters has shown consumers how to wear their silk dresses across seasons. Sweaters, which a few seasons ago accounted for 8 percent to 10 percent of the business, now are closer to 25 percent of total sales.

LoveShackFancy‘s international business has grown 100 percent year-over-year, and the brand is looking to open a warehouse overseas to service the market more efficiently. Customer acquisition is a big initiative for the company, which is investing in digital marketing and prospecting.