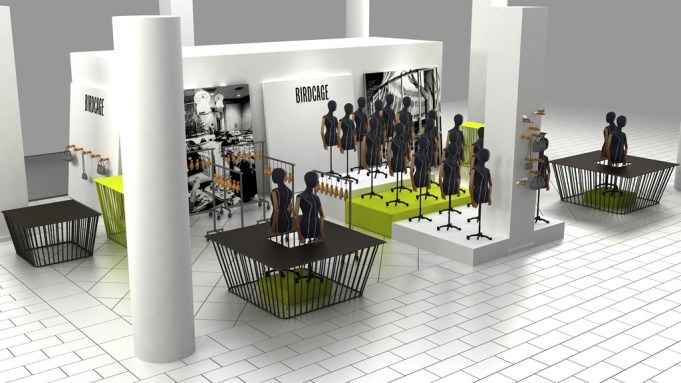 While retailers generally don’t get high marks for fashion innovation, Lord & Taylor is working to raise its rating by cooking up two new concept shops for fall launches — Birdcage and Brand Assembly.

Rodbell characterized Birdcage as presenting “a highly curated, eclectic assortment with over 1,000 styles from more than 30 vendors, primarily accessories, with some cool home products and food,” as well as jewelry, cosmetics, tech and some apparel. “It will feel like a place to discover newness,” she added. “Not every single one of the brands are new to Lord & Taylor, but the way we are putting it together is new and unique. It’s fashion, food and art together.”

Rodbell cited Alex Woo jewelry; Tai jewelry; Marie Turnor handbags; art from the Curator Gallery; flowers from Flower Girl; Joya candles, and candy and baked goods including tarts and cookies from an array of suppliers, among the varied assortment in Birdcage, which is slated to open in October.

Brand Assembly, slated to open earlier in September, will showcase up-and-coming advanced contemporary designers, with a rotating mix of approximately 20 creators, among them Torn by Ronny Kobo, Sachin & Babi and Priory of Ten. The average ticket will be $350, with the range from $60 to $3,000.

Depending on the sell-throughs, some brands could be displayed more prominently for a longer stretch of time. At best, a brand could graduate to being merchandised on a more enduring basis within the contemporary department, which is also on the second floor of the flagship.

“Our team fell in love with the Brand Assembly assortment and came to them with the idea of doing a shop-in-shop,” Rodbell said. “Brand Assembly will bring brands and designers to life in a unique way.” For some, it will mark their debut in the department-store setting, Rodbell added.

With the retail business weak through the first half of this year, there’s a mounting sense of urgency that stores across the board need to get consumers excited about shopping for fashion again. The biggest complaint has been that stores lack design innovation and newness.

Some are heeding the call. Bergdorf Goodman, for example, is developing a fashion lab on its sixth floor for emerging talent. Bloomingdale’s is giving out signals it wants to tighten ties to young designers and showcase more of them. The Council of Fashion Designers of America supports emerging talent though its CFDA Fashion Incubator program. And Macy’s isn’t entirely about promoting big brands and has established the Macy’s Designers-in-Residence of the Fashion Incubators program, which provides a select group of designers with work space and guidance for a year, in collaboration with the cities of Philadelphia, San Francisco and Chicago; academic institutions; industry organizations, and apparel firms.

Birdcage, at 1,500 square feet, and Brand Assembly, at 1,000 square feet, while relatively small in scale, could have a halo effect on business at other departments inside Lord & Taylor, if they draw crowds, and elevate Lord & Taylor’s image on the scale of fashion relevancy by providing a different kind of experience.

Lord & Taylor executives point out that Brand Assembly and Birdcage aren’t the only initiatives geared to generate greater traffic and project a younger image and greater exclusivity. For example, in February, Lord & Taylor launched 424 Fifth private sportswear to rival brands such as Lauren Ralph Lauren, Calvin Klein, Michael Michael Kors and Vince Camuto on the better-price sportswear floor. The shoe department on the second floor of the Fifth Avenue flagship has been renovated and will show off its full updated assortment this fall.

Also this fall, HBC Sport, a private-label activewear collection that includes yoga pants, sweats and T-shirts, will be introduced to strengthen the existing branded presentation, as will an online program selling big and tall men’s merchandise sourced from leading brands that already sell in stores. William Rast tailored and sportswear collections will be sold exclusively in the U.S. at Lord & Taylor this fall, too, and Black Brown 1826 private brand, designed by Joseph Abboud, has been a point of differentiation for several years with a growing presence.

In addition, the company has stepped up efforts to get exclusives from major brands it sells, and in March, the “Oh! Only Here” campaign launched at L&T and Hudson’s Bay to spotlight the products, whether they’re private label or from market brands.

“It’s all building blocks to continue to evolve our brand. Birdcage and Brand Assembly will help do that,” Rodbell said. “The way we are marketing these ideas helps create a voice. We will have lots of events tied in, to invite our existing customers and hopefully new customers. Obviously, the consumer wants newness. We want to deliver that experience to them.”

Bloggers, digital marketing, social media and trunk shows will be the primary vehicles to market Birdcage and Brand Assembly, rather than traditional marketing vehicles. Every Thursday night, trunk shows with three to five creators will be held at Birdcage. “The idea is to create that interactive experience” across different media and marketing strategies, Rodbell said. Birdcage and Brand Assembly shops could eventually appear in other Lord & Taylor locations if the prototypes are successful enough.

“L&T recognizes they have to be really aware of what’s required,” said Repola of Brand Assembly. “You go to all the major department stores, all their contemporary floors and pretty much you see the same thing. By doing this initiative, Lord & Taylor is creating something interesting for the consumer and, at the same time, supporting emerging brands. It’s kind of like an incubator situation.”