Highlighting a lifestyle rather than simply items for sale, the denim brand aims to nearly double sales to $1 billion in five years. 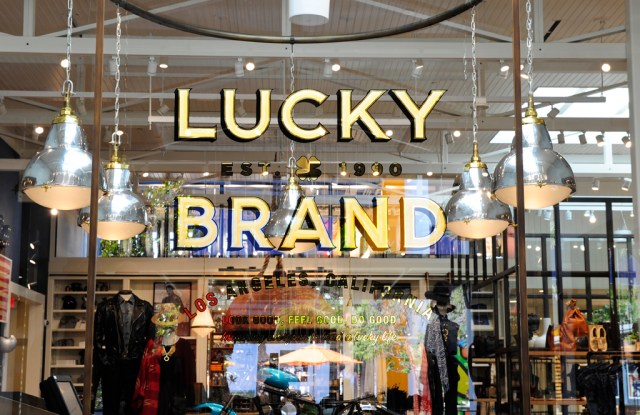 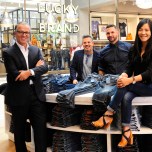 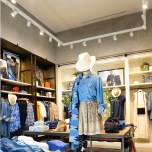 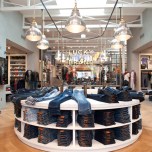 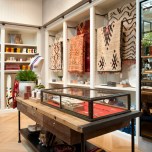 EL SEGUNDO, Calif. — On the eve of its 25th anniversary, Lucky Brand is pushing the reset button.

The Los Angeles-based denim company on Thursday unveiled a new retail concept that it hopes will impress current customers and attract new ones with a whiskey bar, high-tech displays and one-of-a-kind artworks that deconstruct a motorcycle, guitar and sewing machine.

Already operating 170 full-priced stores in North America, Lucky chose its 171st unit here in El Segundo’s latest shopping center, The Point, to serve as the template for future retail openings. The plan, spearheaded by chairman and chief executive officer Carlos Alberini, is ambitious. It’s not just because he invested what he acknowledged as “a lot of my personal money” in his and Leonard Green & Partners’ $225 million acquisition of Los Angeles-based Lucky from Fifth & Pacific two years ago. Indeed, he said, Lucky is targeting to increase annual sales to $1 billion in five years, nearly double the $560 million it posted last year.

Next on Alberini’s agenda is duplicating this artisanal-meets-industrial model in Summerlin, Nev., outside of Las Vegas, where a store is slated to launch Aug. 27. By year’s end, Lucky plans to expand its total retail network in the U.S. and Canada to 175. Internationally, it aims to branch into Canada and Mexico in the next two years. Europe, including the U.K., Belgium, Germany and France, is next. Shops in China, Russia and India are on the drawing board to open, following those in Europe, after five years.

“This is the first huge milestone in the execution of our strategy,” Alberini said. “In the past, we were just selling items. Now, we’re selling a whole lifestyle.”

Alberini was expounding his strategy while sitting on one of his best examples: an old wing chair, reupholstered with vintage indigo fabric, from Lucky’s first-ever home category. Rooted in vintage Americana, moto, rock ’n’ roll and the casual Southern California vibe, that lifestyle is made complete with $25 vinyl records by Guns N’ Roses, vintage jewelry like Rolex watches and a $950 turquoise cuff, a $600 antique Moroccan rug and denim, which makes up half of Lucky’s business.

The 5,740-square-foot store allows for 1,200 stockkeeping units, more than double the 550 sku’s offered in its average shop heretofore measuring 2,500 square feet. Lucky also linked with ceramist Heather Levine for a jewelry collaboration, and interspersed pieces from its women’s and men’s ath-leisure lines, Lucky Lotus and Grey Label, both introduced this year. Alberini declined to disclose sales estimates for the store.

“When you think of the elasticity of the brand,” he said, “we think there’s a big opportunity to create new categories.”

To be certain, Lucky already operates spacious stores, such as its Broadway location in New York, which sprawls across two floors. Alberini noted the East Coast spot is “frankly not as well designed as this one is.”

Walking under the black metal-and-glass garage door that functions as the entrance, there is a brasserie-style glass panel painted with the company’s newly adopted mantra in gold leaf: “look good, feel good, do good; inspiring everyone to lead a lucky life.” On either side are U-shaped tables carved out of white marble, on which $119 faded black skinny jeans are neatly stacked.

On the ceiling, thin wood strips painted white help brighten the venue along with industrial lights and sunshine streaming through skylights. In the back, set into a window that can also be viewed from the busy street intersection behind the shopping complex, a dry-cleaner conveyor slowly moves a blue metallic motorcycle helmet, unfurled American flag and jeans in a constant loop. White oak planks, arranged in a herringbone pattern down the center of the store, contrast the two sides of poured concrete edged with thin brass lines.

Small rooms with movable metal walls double as merchandised mise en scène. Men’s graphic T-shirts printed with a surfing California grizzly bear hang under a polished board made from reclaimed wood by Ventana Surfboards & Supplies. A $3,750 leather club chair dating from France in the Twenties anchors one corner of the women’s section, which features $129 open-toe, high-heel slingbacks in nubby black leather and a $199 cognac-colored leather vest that matches a $59.50 ranger hat.

“It’s not just a pair of jeans,” Lee said. “The brand means a whole lot more than that.”

With more than 70 percent of its customers earning an annual salary in excess of $80,000, Lucky isn’t worried that shoppers will suffer sticker shock from some of the rare finds. Besides, The Point sits on the border of El Segundo, where companies like Murad and Mattel are headquartered, and the affluent beach community of Manhattan Beach, where many professional athletes reside. Keeping an eye on people under 35, who make up a fifth of its customer base, the company makes sure to add $25 Mexican woven purses and $49.50 Pendleton towels to the merchandise mix.

In another nod to the tech-savvy Millennials, Lucky installed touch screens that connect the RFID tags on its merchandise with inventory both in the store and on its Web site. Customers can scan up to 12 pieces, and each request beeps on the sale staff’s iPads for immediate attention. Programmed by Catlook, the screens are making their debut in North America on the store’s main wall and in each of the seven dressing rooms.

“It enhances the experience in a huge way,” Chiovetti said.

As Alberini put it, “We see stores not as warehouses but as showrooms to display the entire line.”