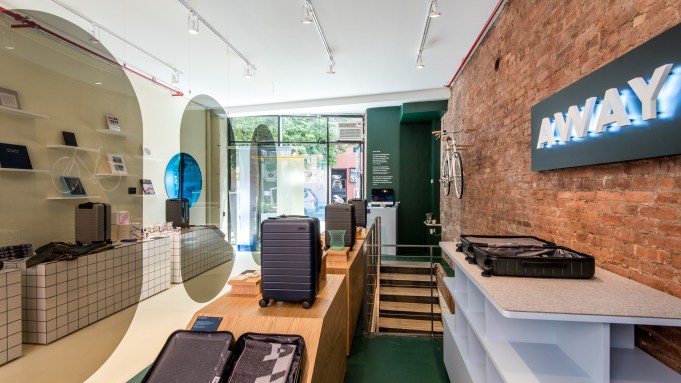 Luggage start-up firm Away is opening a summerlong travel concept store in Manhattan.

The pop-up, located at 325 Lafayette Street, will be open from Thursday through Aug. 31. The store will showcase Away’s first product, The Carry-On, which became available in February.

Away was founded by Jen Rubio and Stephanie Korey, two former Warby Parker executives. The Carry-On has durable double wheels and zippers that are YKK, considered rare in luggage. But what’s different from its competitors is the high-capacity battery that can charge devices up to five times that is accessible from the outside of the bag.

The carry-on is priced at $225. On the drawing board is a selection of larger, checked-in bags.

The pop-up will also showcase objects chosen from design-focused brands in Japan and Sweden, including limited-edition collaborations between Away and Tokyobike, Sockerbit and CAP Beauty, the company said. Also included during the pop-up’s presence is a series of planned events, from dinners to a speaker series and workshops.