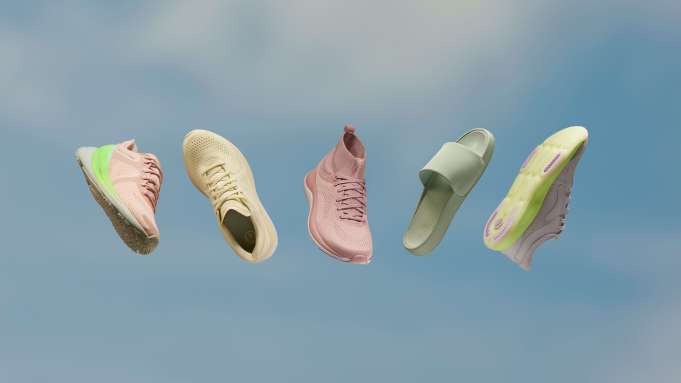 NEW YORK — Lululemon Athletica has a new pair of shoes.

The Vancouver-based athletic apparel and accessories retailer made an appearance in New York Tuesday morning to unveil its latest creation: a women’s running shoe called the “Blissfeel.”

“Footwear is the natural next step for us to expand and apply our long history of innovation in fit, feel and performance and it represents an exciting moment for our brand,” said Calvin McDonald, chief executive officer of Lululemon. “We are entering the footwear category the same way we built our apparel business — with products designed to solve unmet needs, made for women first.”

The Blissfeel will be the first sneaker to arrive — on March 22 in select Lululemon stores across North America, Mainland China and the U.K., as well as lululemon.com — but other shoes were on display in New York, such as the “Chargefeel,” “Strongfeel” and “Restfeel.” (The latter will roll out in the back half of the year.)

The assortment included high-top and low-top sneakers and slip-on sandals in a kaleidoscope of pastels, neon highlights and dark hues, each designed with different upper materials, foam compounds and construction methods meant to span the needs of various activities. Prices start at $148 a pair.

“Meet Lululemon for your feet,” Sun Choe, Lululemon’s chief product officer, told the crowd of about 100 people, a mix of executives, media people and ambassadors, many of whom later went out for a test run of the products. She added that there will also be special-edition footwear launches and seasonal collections. Men’s sneakers are coming in 2023.

“We intentionally started with women first, because we saw an opportunity to solve for the fact that, more often than not, performance shoes are designed for men and then adapted for women,” Choe said. “That didn’t sit well with us.

“A woman’s foot is different than a man’s,” she added. “And yet most performance shoes are designed for him first and adapted for her later. At Lululemon we’re shifting that approach. We know that when she feels her best, she performs her best. Innovating for women is in Lululemon’s DNA — now we’re bringing that same expertise to footwear and women were part of this journey every step of the way.”

In a crowded footwear market — one that is dominated by the likes of Nike, Adidas and Hoka, among others — McDonald added that, in addition to the women-first approach, the performance of the product will be key in persuading consumers to trade in their trusted footwear favorites for a pair of Lululemons.

“When she puts it on, it will feel different; it does feel different,” the CEO told WWD. “I think that is what will ultimately convince them that this is a great product and get them to transition to try it.”

Meanwhile, the company continues to grow with other creations, such as the Lululemon mushroom bags, which the company unveiled last month, last year’s Like New resale program and Mirror’s assortment of accessories, such as dumbbells and ankle weights. (Lululemon purchased the at-home fitness system in June 2020 for $500 million.) In addition, Lululemon was spotted in Beijing as the official outfitter of Team Canada (a job it will retain through 2028), during February’s Olympic Games, debuting bright red uniforms stamped with maple leafs, Lululemon logos and Canadian flags. There’s also talk of a streetwear collaboration.

But McDonald said Lululemon’s ethos will always be rooted in performance wear.

“Our growth is coming from our core [categories],” he said. “Footwear is an exciting category for us. But it’s incremental to the momentum we already have in the business. Our key categories are run, train, yoga, and always will be. And ‘OTM’ — on the move — where we do a little bit of the performance apparel, but for everyday. [But] we’ll carve out areas where we see unique opportunities and unmet needs. We know [fashion] resonates with [consumers] when we see opportunity for that.”

In addition, McDonald said Lululemon will return to its regular programming of Sweatlife events, when it’s safe to do so. There’s also a second experiential store, this time in Houston, set to open later this year.

The CEO was clear to point out, though, that real-life events don’t signal an end to at-home fitness, as previously speculated by some. (The company guided down for Mirror’s annual revenues during its December earnings call, causing company shares to plummet.)

“We’ve always believed in hybrid sweat,” McDonald said. “Sweat at home; sweat physically in the community, outdoors, at our studio partners. It’s always been our vision. And that Mirror plays a role in that vision, in supporting both of those. It’s about convenience. And it’s not in competition to [each other.]”

McDonald said the company will unleash its next five-year plan at an analysts day sometime in April.