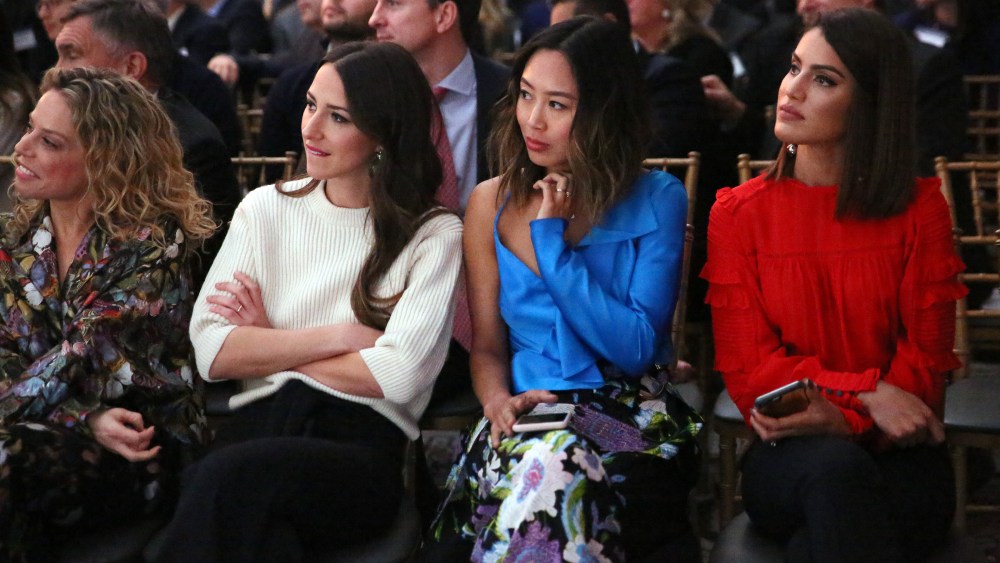 The economy is healthy. The stock market is up. And consumers have money in their pockets.

Yet women’s apparel and the luxury business took it on the chin this past holiday season.

That was the sad message hammered home by MasterCard at Monday’s Financo Forum, an annual event held during NRF convention week that always draws a stellar crowd of retail and fashion executives and presents a major networking opportunity.

“Luxury is not the American consumer. Luxury is the foreign consumer who is not coming in today,” Quinlan said. “Apparel has not sold for six months.”

There was “amazing” growth in restaurant dining — up 5.2 percent last holiday. However, “The very high end of dining out was not there,” Quinlan said, underscoring that luxury across multiple categories was among the “laggards” last holiday.

“It is really a healthy U.S. economy,” Quinlan said.

The softening of the retail business in December was “just really a shift of days more than anything,” with  consumers shopping more in November compared with past years, which took some of the punch out of December’s business. The consumer, Quinlan said, “is shopping fewer places and plans out what she wants to buy before she buys it. “

Geographically, the Southeast has been the nation’s hottest retail market. “If you are thinking of opening a store, it’s where the population is and where we see consistent spending on an ongoing basis,” Quinlan said.

Quinlan’s research, based on 160 million cash and check transactions, reveals how consumers are spending more on experiences, such as travel and dining out, as well as home furnishings and home improvements, and less on apparel and other stuff. Spending on airline tickets was up 11.5 percent; lodging was up 6.6 percent; hardware rose 6.8 percent, and home furnishings rose 5.6 percent.

In her list of “laggards,” Quinlan indicated that jewelry was flat; appliances and department stores were both negative 0.9 percent; electronics fell 4.7 percent, in addition to luxury being down 12.9 percent.

E-commerce sales were up 14.3 percent in November and 19.5 percent in December. Despite the big jump, “Consumers still prefer in-store experiences,” Quinlan said, adding that 13.2 percent of sales in this country are done online. She suggested that retailers get a better return on investment with brick-and-mortar, than with online operations.

Her advice to retailers: partner up with airlines; be aware that consumers are spending more to stay in hotels; tie into causes, and “re-court” the American consumers, as shopping by international visitors has been shrinking due to the strength of the dollar and economic challenges in countries such as Brazil.

“Clearly it was mixed,” Quinlan said, of the holiday season at retail overall. She said shopping centers near where people live and work had good traffic; while outlaying centers further from urban population centers, particularly strip centers, were “clearly challenged.”

The Financo Forum also included two panels, with private equity executives speaking on global investment trends, and the other with “influencers” addressing the rise of digital media.

Among the takeaways from the private equity panel, Jon Sokoloff from Leonard Green & Partners said his firm is “encouraging [chief executive officers] to be more open-minded than ever….What can you cross-market? Nine times out of 10, the playbook you worked [from] 10 years ago won’t work today.”

Neale Attenborough of Golden Gate Capital said that when his firm considers an investment, management teams should know, “Who is the core customer? Why do they love you?” He also spoke about customer acquisition costs, noting that for e-tailers with relevant brands, opening stores can attract new customers quickly and be immediately accretive to the bottom line.

Ryan Cotton of Bain Capital said his firm, when considering investments, “looks for a clear sense for what the product stands for and to whom.” He said management teams should know the definition of a brand’s promise and the magnitude of its universe.

Andy Crawford of General Atlantic said his firm when analyzing a potential investment focuses on the digital commerce and digital strategy, and what is appropriate.

The digital media panel focused on the style influencers have become like brands, each with loyal followers.

Arielle Charnas of Something Navy said those following bloggers are interested in everything about the blogger. “It’s not just about clothing. It could be anything we put on our channels….We are brands now, and super selective about who we work with. We can sell better than a celebrity.” She was referring to how some think bloggers post on whatever freebies they get, but Charnas said she only posts what she likes to remain authentic and credible.

Aimee Song of Song of Style said her followers are mostly between ages 18 to 35, and that when she chooses to post an Instagram photo, there are several decisions made revolving around the shoot, the layout and other matters “because you want it to be perfect.” She cautioned against posting just for the sake of posting something. “Younger people are very visual,” she said. “They care about the experience. It’s about being transparent.”

Camilla Coelho of MakeupByCamila and CamilaCoelho.com, advised, “Always teach them something so they have a reason to come back.”