The new site is a niche take on the content-meets-commerce model pioneered by Net-a-porter. 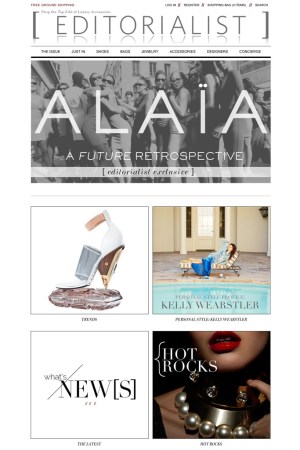 NEW YORK — If Net-a-porter pioneered content meets commerce online, then the Editorialist is a niche take on the model since it focuses on luxury accessories.

This story first appeared in the February 15, 2013 issue of WWD. Subscribe Today.

The e-commerce site, which officially launches today after a two-week soft launch, is billed as a top edit of accessories by cofounder and co-chief executive officer Kate Davidson Hudson. She said Editorialist.com will oftentimes carry the more “editorial” pieces that appear on the runway but never make it into production.

Hudson and Stefania Allen, the other cofounder and co-ceo, left their print posts at Elle as accessories director and senior accessories editor, respectively, several months ago to develop the latest addition to the luxury e-commerce landscape.

“You can shop most of what we editorialize. We buy into the pieces that we feel the most directional — whether up and coming or established. A lot of the pieces will skew more editorial, whereas the mass retailers might buy the lower heel,” Hudson told WWD of the venture, which has secured first-round seed funding from private equity.

The content-to-commerce site will see an update with a new story and corresponding product every three days, including tastemaker picks, designer features and trend stories. Azzedine Alaïa allowed Hudson and Allen into his archives and gave the two a preview of his collection during the Couture shows last month, and the interview and photo shoot are one of the stories currently featured.

Items for sale include Givenchy sunglasses with detachable mink, as well as jewelry from Bernard Delettrez, Lele Sadoughi and Kimberly McDonald. It’s the first place online to carry David Webb, which has also developed a small capsule collection exclusively available on the Editorialist. Hudson and Allen collaborated with Jennifer Fisher, the first designer to sign on with the e-tailer, on a custom piece — a $1,450 Brass Nail Toggle Link bracelet.

If the platform seems a little heavier on content than product right now, this is sure to change, according to Hudson, especially as pre-fall collections from Valentino, Aperlai, 3.1 Phillip Lim, Chloé, Kelly Wearstler and Balmain start to trickle in.

Hudson revealed that the site will open up advertising to “specific luxury houses” at the end of the month.

“We have an advertising sales director — in the same way that the site is highly curated in a luxury filter, we are going to apply that to advertising,” Hudson said. There is currently a team of seven, and she projects $500,000 in sales for the first year.

There will also be a concierge service where an associate can speak to clients about building an accessories wardrobe or creating custom pieces.