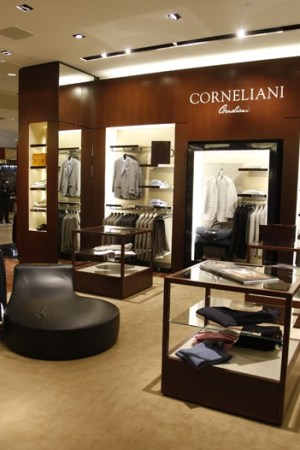 Saks Fifth Avenue has completed a renovation of the Corneliani men’s shop on its sixth floor that puts more emphasis on the lifestyle components of the brand.

The revamped 900-square-foot boutique lets the traditional, classic Italian luxury label showcase some of its newer offerings, according to Tom Ott, senior vice president and general merchandise manager of men’s wear for Saks. “This shop allows us to highlight some new, modern developments within Corneliani,” he said. Historically viewed primarily as a tailored clothing resource, “they’ve done a great job updating themselves.”

A bright spot for Corneliani has been its ID hybrid sport jacket that is on the cover of Saks’ new spring men’s catalogue for $1,495 at retail. The ID jacket has a removable vest or bib of other materials and other bells and whistles such as a leather neck closure and has become a “signature” item for the brand, said Roger Cohen, president and chief operating officer of Corneliani USA. Introduced about three years ago to strong sales, the ID label is now being used on a variety of different pieces, according to Cohen. “We’ve translated the ID jacket into knitwear, casual pants, sport shirts and other items,” he said.

Playing up the ID jacket and Corneliani’s other sportswear offerings is “part of our whole push to present brands as lifestyle collections,” Ott said.

Among the upgrades in Saks’ Corneliani area are dark exotic woods on the cabinetry, enhanced recessed lighting and updated fixtures. There’s also a video screen on one of the columns in the shop. Cohen said the shop was patterned after the company’s recently opened store on New Bond Street in London.

Saks carries Corneliani in 14 of its stores, but there are no plans to add any more shops at this time, Ott said. “With the economic situation as it is, there’s not a lot of capital spending going on, but we’re constantly looking at ways to enhance our lifestyle merchandising approach.”