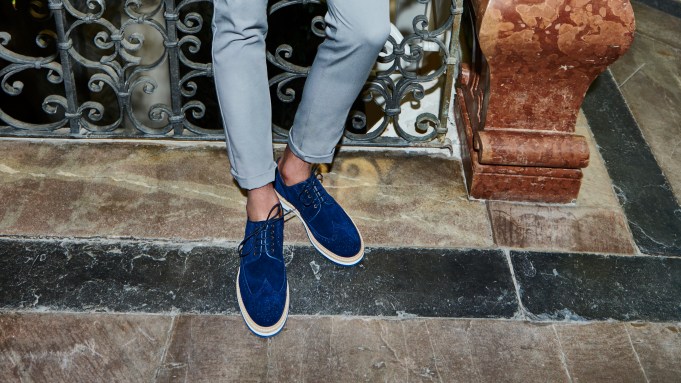 M.Gemi is carving out a niche in accessories that are described by founder and chief executive officer Ben Fischman as “post luxury.”

The e-commerce site at mgemi.com, which launched a year ago selling women’s shoes entirely handmade in Italy, is rolling out a corresponding men’s range today. A private sale will be open to the brand’s existing database, as well as anyone who has referred someone, to shop in advance of the collections’ official launch on March 28.

“Men have been trained that these fine dress shoes are incredibly expensive, and I think that [we’re] bringing that same, or even better, level of quality at price points that make sense. They can enjoy the quality of the product without feeling silly paying the historically exorbitant price points,” Fischman said of M.Gemi’s shoes, which are produced in the same Italian factories as a handful of high-end footwear labels that can typically charge anywhere from $400 to $600.

Enter the “post luxury” category, defined by Fischman as a movement that embraces the very best of luxury — the craftsmanship, the service, and the artistry — but fiercely challenges traditional beliefs around access, frequency and pricing. Luxury product is predicated on long delivery and production cycles and two to five releases a year, versus M.Gemi, which releases new women’s footwear styles on a weekly basis.

In line with this philosophy, 15 men’s styles will be available at launch, spanning dressier oxfords and loafers to more casual boat shoes, moccasins and sneakers. Prices start at $198 for a driving moccasin and go up to $268 for a pair of wingtips. Each shoe comes in traditional black and brown but Fischman is “pushing guys to have more fun than they normally do,” offering versions of select casual styles in salmon, pistachio, purple and bright blue. A Belt Shop will also sell calf and pebbled leather belts for $128 and alligator versions for $298.

Fischman, who in 2013 parted ways with Rue La La, the flash sale Web site he founded eight years ago, set his sights on building a direct to consumer e-commerce brand. He’s raised $32 million to date, including a $14 million Series A two months before the site launched and an $18 million Series B in November from General Catalyst Partners, Forerunner Ventures, Breakaway Innovation Group and Accel. He declined to give revenue projections.

“Over the last year we’ve learned quite a bit about not only the new luxury business, [but] the Italian supply chain and the consumer. We’re taking those learnings and putting that into men’s product,” he explained in a phone interview while in Florence visiting manufacturers. He’s working with six different factories that all specialize in different elements of the men’s shoe world, from soles to uppers.

For instance, a driving shoe for women — handmade by a supplier in Tuscany — performed so well on-site since its debut last year that Fischman is having the same manufacturer produce two driving shoes for men and a style with a two-toned full sole bottom.

“Not to overly stereotype, but the difference [between men] from female consumers who love checking out what’s new and being constantly engaged is that the guys first and foremost want to find the product they love and stick to it. They find a loafer they love and want to own it in three colors,” Fischman said. “[For men] there isn’t as much craving newness as craving optionality in what they love.”

To appeal to this, M.Gemi will offer a “Refresh” package that give customers $100 off if they purchase three items at a time, inclusive of footwear and belts.

“We always believed that, while we love the luxury sector, for us it’s not a big enough industry. [We asked ourselves] how do you increase consumption within the luxury sector, and the way we believe you do this is by offering more newness at somewhat approachable price points,” Fischman said.

He pointed out that 50 percent of female consumers who purchased from M.Gemi within the first five months bought another pair of shoes. Those who bought a second time within that five-month period wound up purchasing, on average, 3.5 times during the first six months. This is higher than the 2.1 purchases that Fischman predicted would occur in the same time frame.

He added: “People wind up buying more shoes. They wind up spending more, but they are getting many more shoes for it.”