The all-American department store is about to spice up its mainstream image. 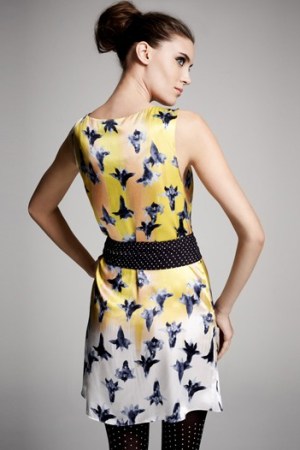 NEW YORK — Macy’s is aiming to get hipper — and muscle deeper into the contemporary market.

The all-American department store, which has built its fashion business primarily on traditional and better brands for the misses customer, is about to unleash a strategy to escalate its underdeveloped contemporary business and spice up its mainstream image.

Contemporary departments, called Impulse, will mushroom from the current 200 Macy’s doors to 220 this year, and up to 400 over time, giving the retailer a bigger market reach than any competitor. Established and emerging designers, even a few Europeans that previously would have been inclined to go with H&M or Target before Macy’s, will rotate in and out of the Impulse mix via exclusive capsule collections. Kinder Aggugini, a designer from London with a rock ’n’ roll edge, is up first, to be followed later by Karl Lagerfeld, among others.

And a new private brand venture, called Bar III, will “anchor” the Impulse space. Bar III will be further trumpeted with Macy’s first-ever pop-up shop at 156 Fifth Avenue in the Flatiron District here. The shop opens Feb. 10 and will operate for five weeks. Pop-ups are often preludes to permanent stores, raising speculation that Macy’s may branch out into specialty retailing with Bar III or Impulse.

Macy’s officials said they are not currently looking at additional real estate, but could consider the possibility after examining the performance of the Bar III pop-up. About 20 years ago, Macy’s opened some specialty stores, including several selling Aéropostale and Charter Club, two of its private brands at the time. The strategy never really took off; Aéropostale became a separate public company, while Charter Club remains a key Macy’s private brand.

Meanwhile, the relaunch and marketing blitz for Impulse, which will be weighted toward social media and utilize bloggers to style Impulse ads for billboards and magazines, breaks earlier in February.

“We have a contemporary customer that shops our stores, but we have been under serving her,” acknowledged Jeff Gennette, Macy’s Inc.’s chief merchandising officer. Until now, “We are gaining big share, but not winning with customers under 30. We just didn’t have a national strategy that was going to work. But in 2011, we are going to layer on quite a bit of volume and we have a three-year strategy to make it a very meaningful business. In certain doors, Impulse is as big as better sportswear, but in other doors we don’t have it all.” It’s mostly seen in Macy’s West Coast stores, where the contemporary manufacturers are concentrated.

Gennette, noting the Impulse strategy starts with 220 stores, said, “We have the opportunity to take it out to more doors once we have success. Three hundred to 400 doors is where the game is eventually.”

The population in general is gravitating toward contemporary fashion, particularly among the growing Hispanic, Asian and African-American communities, Gennette said. He also acknowledged that at upscale competitors such as Saks Fifth Avenue and Nordstrom, contemporary floors are typically among the most crowded.

Macy’s Impulse areas will be delineated with clean, crisp, black and white fixturing and visuals across seven merchandise categories, thereby becoming a “thread” running through many locations. Macy’s aims to grab market share with prices falling below higher-end retailers such as Scoop, Barneys Co-Op, Intermix, Saks and Neiman Marcus, but above cheaper fast-fashion chains like H&M and Forever 21. Impulse will range in price from a $28 T-shirt to a $400 jacket or coat, but the sweet spot will be in the $50 to $80 range. The Bar III piece will offer pixie dresses, priced $58 to $78, basic tops at $20, and novelty tops and bottoms from $48 to $68. Bar III men’s wear will include pants from $59 to $69, shorts for $39, jackets for $99, suits for $495 and dress shirts and ties for $49.50.

“This is a customer that understands the high-end contemporary piece of the business. We are trying to make it more accessible to men and women,” said Molly Langenstein, Macy’s executive vice president of fashion and new business. The target audience is 18- to 30-year-old men and women.

“We are definitely hearing that there is a [Macy’s] customer out there interested in fashion, not couture, but certainly a little bit higher end than what we’ve been selling to our day-in, day-out customers,” said Martine Reardon, executive vice president of marketing. “They’re willing to spend a little more on key designer-type looks. We do really well with customers 30 and over, but we have not necessarily tapped into that customer 30 and younger, a new Millennial. We are really looking at a new customer who may not necessarily be shopping us day-in and day-out.”

Some retail consultants like where Macy’s is going. “This is definitely a demographic you want to be positioned strongly with as the economy starts to strengthen,” said Joel Bines, managing director, AlixPartners LLP. “Many people in this group are likely to have fewer obligations,” financial and otherwise. “Because of the stage of life they’re in, they are more inclined to spend their discretionary income.”

“Department stores like Macy’s have been a little bit detached from the contemporary business. It’s a tough space. It’s riskier, and faster,” said Ray Graj, partner and chief operating officer, Graj + Gustavsen. “It’s hard to go in and out quickly when you are dealing with an organization the size of Macy’s. They’re driving a big ship. You can’t act like a Zara or H&M because they don’t have that kind of infrastructure. It’s also much more about being a brand steward than dictating a point of view and more about engaging the consumer and talking with them and connecting with them in a more relevant way. It’s a whole paradigm shift. But if Macy’s can elevate their offering without going too high, it could be a great space.”

Since Macy’s centralized into a national chain two years ago and adopted its My Macy’s field organization to monitor consumer style preferences by each store, executives have gained confidence they can determine where and in what quantities they should distribute contemporary goods and cost-effectively market Impulse cross-country. “We basically pulled together our best talent and created a national Impulse team,” Gennette said. Also, the Rachel Rachel Roy collection exclusive to Macy’s is “hotter than a pistol,” Gennette added. It’s distributed in 200 doors, from 75 initially. Other key lines currently in Impulse are French Connection, BCBG, Free People, Joe’s Jeans and Seven For All Mankind.

Macy’s buyers will be required to stay close to fast-moving trends, and react quickly by flowing merchandise into the stores frequently. To that end, Gennette said Macy’s is using more domestic production, and makers in China on “very short lead times,” and will hold back 20 to 25 percent of Bar III goods in warehouses, and 15 to 20 percent on Impulse merchandise generally, so it’s ready to be delivered to selling floors as soon as hot-selling trends are identified.

Reardon described Impulse as having three core components: market brands, such as Seven For All Mankind, that command the highest prices within Impulse; exclusives such as Rachel Rachel Roy and the Bar III private brand that are priced lower but still represent “trend-right merchandise,” and designer capsule collections, whereby a different designer creating exclusive items will be featured every two months or so. Aggugini’s collection will appear first, then three other designers, including Lagerfeld, will create capsule collections, each selling for about two months. The quartet will supply exclusive designs in the fourth quarter that will collectively create a unique holiday assortment.

“In some cases, we will be introducing customers to designers they may not actually know,” Reardon noted. “Kinder is not necessarily well known in the States. But for our customer it’s our opportunity to give her something new and educate her a little. For our Impulse department, these guest designers I’d say is the icing on the cake. It will be a very special piece making it very new. We are not taking a traditional marketing approach for this customer,” Reardon said. “We know she is a little different, that we have to reach her in different places. Most of what you’ll see will be within the social space, within the digital space, but there will be a lot of outdoor and some magazine. We know the customer is [still] looking to magazines for fashion advice and trend information.”

Macy’s will use video as well, starting with Aggugini on a photo shoot and being interviewed. Also, Macy’s will stage an event to launch the Aggugini collection at the Herald Square flagship on Feb. 15.

Asked if it will be difficult for Macy’s, with its broad family appeal, to project a hipper, contemporary image, Reardon replied: “It will be a little bit challenging. We are a house of many different lifestyles and brands, unlike a specialty store with one singular focus. But we have studied the consumer, where there are opportunities, where we can gain some market share and where there is ‘white space’.…Will we be 100 percent right with everything? Probably not. But we never felt more confident about a strategy.”

As far as heading into the specialty store arena with Bar III or Impulse, “I don’t think right now we are in search of real estate, that is not something we are looking at this time,” Langenstein said.

“I don’t want to comment on that,” added Nancy Slavin, senior vice president of marketing, Macy’s Merchandising Group. “We undertook Bar III as a marketing initiative, not a new concept at retailing.” Asked where the name Bar III came from, she said, “We wanted something that evokes nightlife. It’s also graphic, simple and contemporary.”