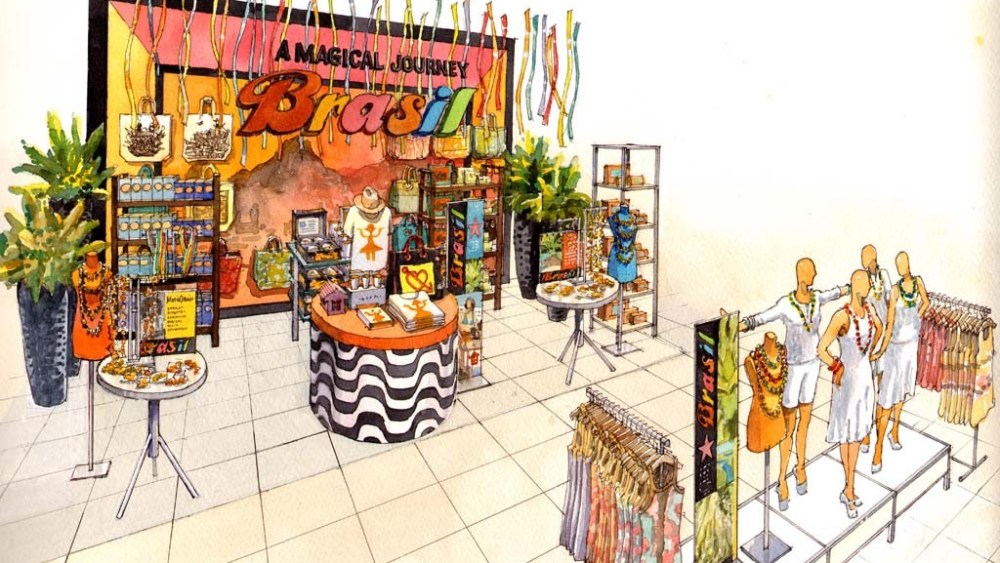 Add vibrant colors and some sex appeal and you have the formula for “Brasil: A Magical Journey,” Macy’s next push for exclusivity. Import promotions haven’t been seen for decades since Bloomingdale’s, Neiman Marcus and even J.C. Penney on occasion tackled the strategy. The format got tired but Macy’s thinks it’s viable again, given Brazil’s burgeoning economy and fashion industry.

“This campaign took us a year to build,” said Molly Langenstein, Macy’s executive vice president, millennial and new business development. “We practically created our own trade fair,” working with Apex-Brasil, ABIT and ABEST, agencies that promote Brazilian trade, textiles and fashion designers, respectively. Macy’s was given a building in São Paulo, where 100 companies showed their wares to buyers. Eighteen companies got picked for the promotion.

Langenstein said the campaign is geared to evoke a sense of discovery by offering products rarely, if at all, seen in the U.S., and will emphasize hand craftsmanship, natural materials and sustainability. Color and Brazil’s famously sexy swimwear will also play a part, but the heart and soul will be the O Mercado market on the main floors of 300 Macy’s locations and on macys.com. It will be stocked with about 100 exclusive or limited edition beauty, fashion, food, art and home items imported from or influenced by Brazilian style, and 10 percent of its sales will be donated to help protect the Amazon Rainforest.

“Brazil’s burgeoning international appeal and enchanting culture inspired us to create a unique shopping environment that will bring even more newness, color and excitement to our stores,” said Martine Reardon, chief marketing officer.

O Mercado launches April 22, ahead of the official May 16 kickoff for “Brasil: A Magical Journey.” Practically all of Macy’s 800 stores will have some promotion-specific product, and at each unit, “there will be impressions of Brazil throughout,” said Langenstein. The strategy raises speculation that Macy’s could stage a string of import promotions tapping other countries.

In addition to collaborating with Brazilian designers and vendors, U.S.-based designers Francisco Costa of Calvin Klein, Carlos Falchi and Rachel Roy created capsule collections. Costa is creating a line of dresses, while Roy, who has an ongoing exclusive collection at Macy’s, has teamed up with the Bossa Nova icon Seu Jorge for a limited edition line. “I just vibed with him,” said Roy, who met him in Brazil when Macy’s was planning the event. “Seu is smart and very talented, and when he agreed to work with me, I thought it was the perfect way to introduce a rock star to my Macy’s girls.” They created dresses, jewelry, espadrille booties and printed clutches with a Seventies beach flair, which all retail from $24 to $149. Jorge was instrumental in choosing colors and prints, including motifs inspired by tilework on Brazilian sidewalks.

RELATED STORY: Macy’s Brings a Taste of Brazil to NYC >>

For Falchi, who is from Minas, Brazil, creating a Falchi by Falchi collection for the Macy’s initiative was a natural. “Being Brazilian, everything came together,” Falchi said, adding that the handbags, jewelry, scarves, pareos and watches reflect the spirit of his main collection, but at lower prices, from $59 to $119. Colorful, reversible nylon bags with printed linings were inspired by the designer’s paintings. “It’s like everything you can put in your bag to go to the beach,” said Falchi, who left Brazil in 1965.

“We are doing bikinis, cover-ups and skirts all related to the beach,” said Cecilia Prado, a knitwear designer from São Paulo. “We have a very unique style, with handmade patchwork.” She acknowledged she designed with certain Macy’s specifications on prices and shapes, but kept the spirit of her clothes intact. “We had to use the American cut which is different from a Brazilian. We made the shape of the bikini a little bit bigger than the normal one.” The promotion marks Prado’s debut at Macy’s, though she has sold Neiman Marcus, Anthropology, Scoop and Open Ceremony.

Rio de Janeiro’s Isabela Capeto created totes from reused nylons, as well as T-shirts, birdhouses, soaps and candles; on the totes, she worked with a project called Tem Quem Queira that provides work for prison inmates. “We kept to our style but did something exclusive,” for Macy’s, she noted.

Brazil’s swimwear firms will be a big component, including Sauipe, Despi and ANK. Calvin Klein, aside from Costa’s dresses, is providing Brazil-themed men’s and women’s apparel designed by creative director Kevin Carrigan, as well as a selection of underwear, shoes and accessories.

Other authentic Brazilian products coming to Macy’s: Art da Terra, which utilizes indigenous fibers like buri and organic golden grass to handcraft jewelry and handbags; Brazilets, which sells spiritual ribbon bracelets from Bahia; Garoto, a large chocolate manufacturer that will offer bonbons, ice cream treats, hard candies and chocolate powders; tabletop by Marcelo Rosenbaum, a well-known architect and designer from São Paulo; “biojewels” by Maria Oiticica, who uses seeds and pods from the floor of the Amazon; Natura Ekos beauty products that advocate social responsibility and sustainability, and Phebo, a large soap and perfume firm using vegetable-based, paraben-free ingredients not tested on animals and produced in the Amazon.