The retailer will be wooing the post-Christmas shopper like never before. 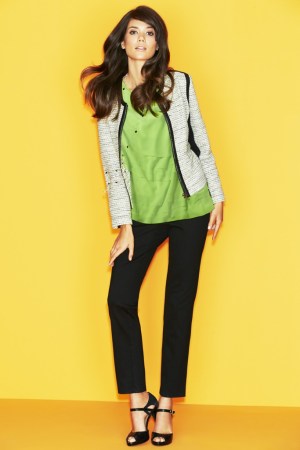 Macy’s will be wooing the post-Christmas shopper like never before.

The department store has devised an unusually aggressive and comprehensive campaign, dubbed “The Week of Wonderful,” which will be launched nationally the day after Christmas, and conclude New Year’s Day, WWD has learned.

“Over the last couple of years, the week after Christmas has become really, really important, largely due to the fact that people take vacation, schools are off, and there’s no more pressure to get a gift for grandma or Aunt Tilly. We are trying to make the week even more important,” said Martine Reardon, Macy’s Inc.’s chief marketing officer.

It’s also a busy and somewhat sloppy period on the selling floors of virtually all retailers, marked by the steepest clearances of the year and picked-over assortments leaving the odd items on the shelves. There are also massive returns of unwanted holiday gifts, as well as some gift-card redemptions, challenging retailers to keep their service levels high.

Generally, retailers don’t approach the post-Christmas week very creatively or wrap a campaign around it. It could be a missed opportunity for many. But Macy’s Week of Wonderful appears strategic. Planning started in the spring and centered on arranging much earlier deliveries of certain spring fashions from private brands and national brands. Deliveries, Reardon said, were accelerated four to six weeks ahead of the normal cycle.

There is also TV advertising and two catalogues: a 56-page book conveying the new arrivals, and a 36-page book of sale items, mostly 25 to 50 percent off, though some are as high as 80 percent off. Macy’s will also use the WOW acronym in its marketing and will simultaneously promote “super savings and new must-haves items.”

Macy’s main 30-second Week of Wonderful television spot will start airing Monday at different times during the day, in an effort to “brand” the week. The commercial was directed by Adam Shankman, a judge on “So You Think You Can Dance” who also directed the remake of the movie “Hairspray” and directed and choreographed episodes of “Glee.” It stars Clinton Kelly, from the reality show “What Not to Wear” and a veteran of Macy’s ads, furthers the sitcom-themed format that Macy’s introduced this fall and concludes with a splashy Broadway-style song-and-dance number. There are additional spots, Reardon said, that refer back to the original brand spot and spotlight promotions, like the denim event.

Reardon also said there will be makeovers, gifts-with-purchase on the beauty floor and mobile and social components, including a YouTube takeover page for the actual television spot. Macy’s stores will be open earlier than normal on the day after Christmas and subsequently resume normal hours. Other components of the week, along with the spate of discounts, include Macy’s biggest underwear sale of the year, a denim event involving $10 gift cards and a white sale for towels and bedding. “We have themed events within all the day-after-Christmas sales,” Reardon said.

“We’ve always had very good post-Christmas sales,” Reardon said. “It’s really important to give customers the opportunity to get great bargains.” That’s still the case this year, though with the campaign, there are a few additional layers to the proposition, Reardon explained. “We’re giving the customer alternatives to new products she has not seen before. She’s really been seeing the fourth-quarter holiday product. Now it will be brand-new product. We are calling it transition product — all fresh new receipts, all of those must-have items, and not necessarily spring merchandise. It’s new colorations of strong-selling trends and silhouettes.…If you think about holiday product being all red and green, think of the transition merchandise as having real fashion colors, vibrant colors, blues, salmons and red — really spring colorations.”

Early spring fashions are also a big part of the Week of Wonderful package, and particularly prevalent in stores in warm climates. The merchandise will be evident in women’s, the contemporary departments for Millennials, children’s and men’s categories, as well as in shoes, handbags and accessories. “You will absolutely see it all across the store,” Reardon said. A small amount of home products will also be noticeable.

Holiday business at stores nationwide has so far been only fair, with the exception of the Thanksgiving period. The mood for holiday shopping just isn’t there, according to several retail executives and analysts. “Business is soft and I see more markdowns,” said retail analyst Walter Loeb, referring to retailers across the board. Macy’s finished November with a 0.7 percent decline in comparable-store sales, impacted by Hurricane Sandy, and won’t comment on December sales until after the month.

Asked if the WOW campaign was a reaction to how the Christmas season was unfolding, Reardon flatly stated: “This has nothing to do with reacting. To do a big event like this, you have to plan this out. We’ve been planning it for nine months. We couldn’t execute something like this if we were just in reaction mode.

“I don’t want to say how other retailers approach the day after Christmas, but for us, this is strategic in that we have created this Week of Wonderful. It’s a week where most people do not work, have time to spend with families, go to a movie, shop leisurely and have time to do things you just really enjoy. There’s no pressure to buy for somebody else. It’s all about you now.” Macy’s officials hope that the Week of Wonderful permeates the consumer conscience in years to come, similar to Cyber Monday and Black Friday.

“There is an overwhelming amount of returns the week after Christmas, and Macy’s is trying to convert those returns into new sales,” Loeb said. “In many cases, people make a return and decide to go home without getting anything new.” Loeb added that Allied Stores, a former retail conglomerate, “fought for the post-Christmas business. They called it the 13th month. Macy’s is the first strategic plan for this period that I have heard of in a long time.”

The post-Christmas week draws the “superbargain hunters bottom-fishing for values,” said Arnold Aronson, managing director of retail strategies at Kurt Salmon. “The customer has to compromise on what she can get with sizes and colors. Assortments are pretty inconsistent. The more inconsistent the assortment, the lower the price.”

The majority of people in the stores after Christmas have not come in purposely for newness, but if these early deliveries are there in selected categories, they freshen up the floor and there’s a good chance people will purchase them, Aronson said. “It’s always an impulse situation once you get people in the store.” The odds of impulse purchasing are even greater if the shopper has a gift card or a store credit, Aronson noted. In these situations, he said, “People feel like they’re getting it for free.”