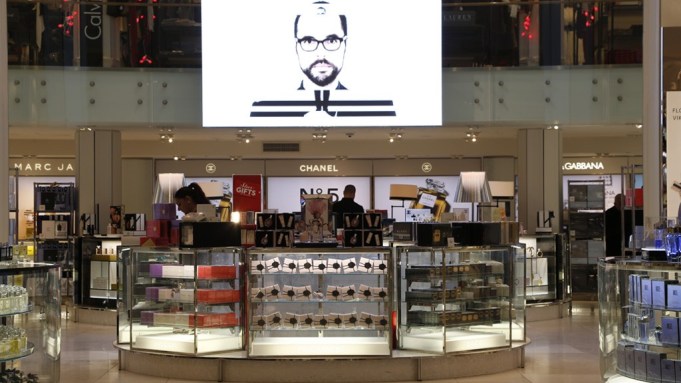 Macy’s christened the new beauty floor at its Herald Square flagship in Manhattan this week with a host of launch activities including ribbon cuttings at new counters like Bobbi Brown and Laura Mercier. Celebrations, including appearances by various brands’ national makeup artists, will continue into December.

“I want [people] to think about us as a world-class destination for beauty,” said Muriel Gonzalez, Macy’s Inc.’s executive vice president and general merchandise manager of cosmetics, fragrances and shoes, while perched over the brightly lit, 24,000-square-foot beauty floor, which now includes no less than a half-dozen new brands and a number of updated amenities. “We always had the traffic, but we didn’t have the environment and we’ve created the environment.”

“We asked all our brands to really think about what was their best world-class counter and to bring that to us and to evolve it,” said Gonzalez, who observed early holiday traffic from the newly expanded mezzanine floor after making an appearance at the Mercier counter launch on Wednesday morning. “The industry responded in such an amazing way because everyone really bought into the vision of Herald Square and what it could be.”

The finished department received a big thumbs up from perhaps the most authoritative expert on department store beauty floors. “Macy’s has created a unique standard for international cosmetics departments,” said Leonard A. Lauder, chairman emeritus of the Estée Lauder Cos. Inc. “It has set a high bar for all our stores to be able to aspire to.”

Although Macy’s executives would not break out financials, industry sources estimate that the beauty floor redesign, part of a storewide $400 million dollar overhaul to be completed by 2015, is on track to elevate the retailer’s yearly beauty sales by 40 percent within the first year. Industry sources believe Macy’s generated $100 million in beauty sales last year and will do $140 million next year, which would put Macy’s on par with what market sources estimate as Selfridges’ beauty business.

“Our cosmetics department is tied to the full store: This is our front door,” Terry J. Lundgren, Macy’s chairman, president and chief executive officer, declared on Tuesday before he unveiled the store’s new Bobbi Brown counter. “If we don’t make a good first impression with cosmetics, the shopping experience is lost. Cosmetics is intended to be our best foot forward.”

At the center of the retailer’s ground-floor beauty department is the newly opened Memorial Door Entrance off of 34th Street, which served as the original entrance to the store circa 1902 and has been closed for more than a decade. These days, customers entering that door will immediately see a number of the retailer’s new brands and have a direct vantage point into the fragrance department.

“We wanted to make sure we had a nice clear sight line to the perfumery because that’s so important to us at Macy’s,” said Gonzalez, adding that the store expansion allowed the retailer to step up its cross-category beauty offerings. “We’ve always been a very strong fragrance store so we wanted to maintain that, but we also knew we had the opportunity to add brands in color and treatment. We didn’t have the space for it before.”

Another element of the beauty redesign is a new 4,000-square-foot space for men’s skin care with brands like Lab Series, The Art of Shaving and Task. “We thought we had a real opportunity in men’s skin care based on the fragrance [business] that we do, so we dedicated a pretty large amount of space to skin care, which you can see right from the Seventh Avenue window,” said Gonzalez.

For Claudia Poccia, president and ceo of Gurwitch Products, owner of Laura Mercier cosmetics, entering Herald Square — situated between two of the most trafficked corners in North America — is a chance to tap into a diverse, not to mention sizeable, demographic.

“This is really a great opportunity for the brand not just for North America, but really globally, because its very much an international client base,” said Poccia, during the brand’s ribbon-cutting event. The new space was modeled after Mercier’s own makeup studio with design elements like plasma screens and professional lighting units.

“We wanted to really put our best foot forward…and fine-tune the new aesthetic and design of the brand that we’ll be taking out globally,” she said, adding that counter redesigns at Selfridges and Harvey Nichols are due in the first quarter of 2014. “This is the first counter that really has the most current elements of where we see the total Laura Mercier design aesthetic going.”