Pride outposts have been created at more than 100 Macy’s stores and on macys.com. 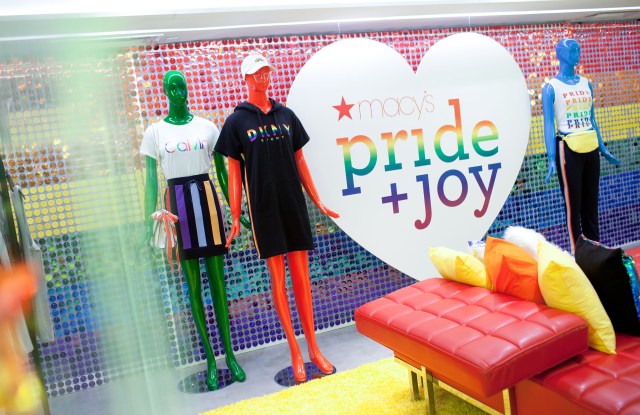 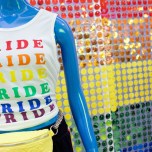 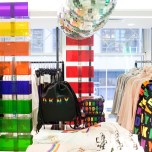 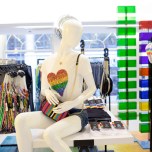 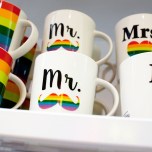 The shop features Pride-themed merchandise, including clothing, jewelry, shoes, home goods and undergarments, from such brands as Kenneth Cole, INC International Concepts, Levi’s, DKNY,  Polo Ralph Lauren, Original Penguin, Adidas, Under Armour, Calvin Klein and Michael Kors. Pride outposts have been created at more than 100 Macy’s stores and on macys.com, with partnerships with The Trevor Project and NYC Pride. Macy’s is also participating in 24 Pride parades across the country and in-store special events.

Customers can raise funds for The Trevor Project from June 1 to 17. During that period, Macy’s stores nationwide are participating in a charitable round-up program. As customers complete their in-store purchases, they will be invited to round up to the nearest dollar (up to 99 cents) and donate the change to The Trevor Project, which provides crisis intervention and suicide prevention services for LBGQT+ youth.  In select markets, the round-up campaign will be extended through June 30 to tie in with the Pride parade celebrations in which Macy’s has a local presence.

During Thursday night’s festivities, Dee Roscioli of “The Cher Show” performed from the musical, Big Gay Ice Cream — compliments of DKNY — was served, along with Prosecco and light bites. There was also an opportunity to meet Kenneth Cole, a longtime supporter of human rights.

Shawn Outler, chief diversity officer of Macy’s, said this is the first time they’ve done something on this scale, incorporating 100 stores. “It’s some of our best vendors,” she said, noting the size of the shop is 2,500 square feet. Outlet said Macy’s will have a float in the New York Pride parade, as well as floats in several other cities. She said this initiative will be a “great model for us,” with all the diversity programs Macy’s supports.

Cole’s brand has been supporting equal rights for the LGBTQ+ community for more than 25 years.

”Last year, with Macy’s they put in a little Pride shop because we thought it was an important statement to the community. Today, it’s become a big deal,” said Cole, clearly pleased with all the participants. “It’s a bigger message than any one of us. I’m so overwhelmed. This is clearly a testament of how accessible this message has become today and arguably mainstream. A couple of years ago, people still weren’t talking about it in a lot of places,” said Cole.

He said 50 years ago with the Stonewall riots, they got a lot of attention. “Over the years, they were able to shift popular opinion, and the notion of inclusion and acceptance and social justice just took hold and it’s very impressive,” he said. “Macy’s is jumping out in front of everybody here. It’s definitely noteworthy,” said Cole.

For Pride this month, Cole’s company has been working with “Prom” on Broadway. Cole’s team spent a day with cast members of “The Prom” to create a film that marks the anniversary of the Stonewall uprising. Cole asked the cast what their personal reasons were for standing with this cause. The content will be live throughout the month of June, with a print wild posting campaign, that began May 26 and runs through June 27 in New York, Los Angeles and San Francisco and a digital and social campaign with New York magazine to help raise awareness of the Pride campaign.

In addition, Cole has introduced a 2019 limited-edition capsule collection of gender-neutral slides, sunglasses, sneakers, T-shirts, hats, socks and other accessories, each designed with rainbow details. As part of the collection, Cole has made a donation to the United Nations Foundation in support of U.N. Free & Equal, a global program of the Office of the U.N. High Commissioner for Human Rights to promote the fair treatment of the LGBTQ+ community. In many new Pride products, Cole will be using the LGBTQ+ Pride rainbow flag with additional black and brown stripes. These represent LBGTQ+ individuals  of color, a group that has historically been marginalized, ignored and excluded within the community.

Cole will once again collaborate with Macy’s flagship on a window display on Seventh Avenue from June 17 to July 15. The WorldPride globe, celebrating the addition of black and brown colors, will hang in front of Pride slides, that are featured as a backdrop with white LED lights framing it to produce a soft glow. The Kenneth Cole and Macy’s logo, along with U.N. Free & Equal and WorldPride, are applied to the glass to signify the strong partnership and support of the LGBTQ+ community.

Finally, Cole is hosting an event in honor of Pride month in its New York City flagship on Bond + Bowery on June 24. The event will be followed by a dinner for members of “The Prom” cast and creative team, hosted by Cole.