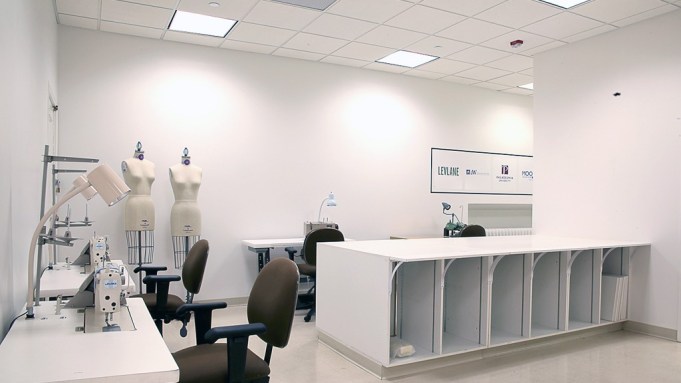 It’s a familiar story — designers who work out of their homes, on a shoestring budget and with a sense of isolation.

However, Macy’s, in collaboration with the cities of Philadelphia, San Francisco and Chicago; academic institutions; industry organizations, and apparel firms, is changing the scenario a bit. The retailer is providing a select group of designers with some work space and guidance through the Fashion Incubator program. It started at Macy’s State Street flagship in Chicago in 2008, grew to Macy’s Philadelphia a few weeks ago, and will be operating at Macy’s San Francisco flagship as well by the end of this month.

“I’m blown away,” said Melissa D’Agostino, describing how she feels to be a “designer-in-residence’ at the Philadelphia Fashion Incubator.

D’Agostino, who utilizes a distinct technique of hand-dyeing fabrics called Shibori, for years has been designing at her home in Germantown, in northwest Philadelphia. “I’ve been a one-woman show. I create the fabrics, sew the clothes and put together limited edition collections sewn-to-order for my customers,” D’Agostino said. “That’s been the most resourceful method to keep my costs to a minimum.”

But becoming a designer-in-residence at Fashion Incubator could be a game-changer. It’s where D’Agostino expects to learn about garment production and producing multiple pieces. “That alone will be a big building block,” she said. She also expects to get help on editing her collection, among other assistance.

The program provides studio space, mannequins, forms, sewing machines and workshops on accounting, production, trend forecasting, business development and public relations. In Philadelphia, the Fashion Incubator at Macy’s (formerly Wanamaker’s) is in a 600-plus-square-foot “Project Runway”-inspired production and showroom space that includes an office and conference room. On-site, the designers will produce sample collections and show them to retailers. Yet unlike the reality show, “It’s not a contest,” stressed Andrea Schwartz, a Macy’s Inc. vice president for media relations and cause marketing. The designers are more apt to share some fabric, rather than compete, and are there to learn to become better designers and businesspeople, she noted. They also receive mentoring from industry and business professionals, collection critiques from retailers, and participate in pop-up shops, trunk shows and fashion shows, though they still finance their companies and purchase the materials to create collections. They’re selected based on their talent, fashion vision and overall business concept.

“The most valuable part of the program was the mentorship,” said Christina Fan, a self-taught designer of contemporary women’s fashion who was a Fashion Incubator designer-in-residence in Chicago in 2010. With a better handle on her business, this year she’s starting to distribute her fashion internationally as well as nationally. “We learned business foundations, the basics of accounting, how to finance your company, legal issues, public relations. We had workshops that brought in people with different expertise, from styling to factoring. We learned all the intricacies of the fashion industry.”

Jim Sluzewski, Macy’s corporate spokesman, said Macy’s is open to having Fashion Incubators operating in more cities, though each incubator is a “separate self-standing organization” built upon participation from academia, civic organizations and industry. “It is a community initiative,” Sluzewski said.