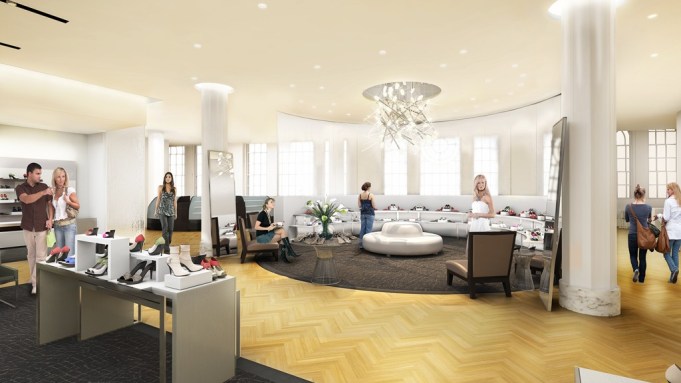 Around town, there’s been an unprecedented degree of one-upmanship — one store renovates, then a crosstown rival follows suit and another emerges with a fancier format, with everyone vying for exclusives.

This month, Saks Fifth Avenue enhances its popular 10022-Shoe department with a growing contemporary component. Last month, Barneys New York launched a shoe floor, bringing men’s and women’s styles together for the first time. Not be left in the dust, Lord & Taylor is redesigning its second level to be solely devoted to shoes. And Bergdorf Goodman, the first to give shoes their due by creating a “salon” years ago, recently reorganized the space by lifestyle and pumped up the assortment with several additional designer labels.

But for now, all eyes are on Macy’s, where the biggest transformation is under way.

As part of the top-to-bottom, $400 million overhaul of the 2.2 million-square-foot Herald Square flagship, Macy’s is romancing women’s shoes by giving the category more selling space than any other retailer in the world — 39,000 square feet to be precise. That pushes Selfridges in London into second place with its 35,000 square feet of selling space devoted to footwear. Macy’s is also relocating shoes to the second floor after being less prominently housed primarily on the third and fourth floors.

All told, there will be 280,000 pairs of shoes, representing a 50 percent increase in product. Including all the back-of-the-house storage space that’s been modernized as well, Macy’s will have 63,000 square feet in total for shoes.

At Macy’s, shoes rank among the hottest businesses, along with accessories, watches, cosmetics and jewelry, though it’s not necessarily a slam dunk. “This is a category that requires excellent salesmanship, a comfortable environment and, very importantly, a wide range of product that cover the styles, assortments and price points for a large number of customers. We have all that covered,” Terry J. Lundgren, Macy’s chairman, president and chief executive officer, said in an interview.

“The most direct route to a woman’s heart is often through shoes,” Lundgren added. “Shoes for women in particular is such an important part of the wardrobe. She can wear the same pair of shoes on multiple occasions, but you wouldn’t catch her wearing the same sportswear or dress three times a week.”

From a business perspective, “When you can satisfy a woman with a great pair of shoes, you can convert her to a core customer in other categories,” Lundgren said.

This week, Macy’s second floor was teeming with hard hats kicking up dust and associates pushing racks and unloading boxes, all working hard to get the shoe floor ready for today’s partial opening. Despite the hubbub, it was clear enough to see what the renovation strategy is all about. Simply put, Macy’s will be a different store with an air of the upscale, and a more organized, easier-to-shop environment that delineates different lifestyles.

There’s also the sense that some real service is being implemented via new technologies and increased manpower. That’s been lacking at Macy’s Herald Square. It is among the most trafficked store in the world yet has also been among the most maligned, having been difficult to shop and in need of some housekeeping.

“It’s been a tough store to navigate. We are making it much more understandable for customers,” said Tom Herndon, senior vice president of store design, who with Muriel Gonzalez, executive vice president and general merchandise manager for cosmetics, fragrances and shoes, took WWD on a tour of the shoe floor this week.

The amount of structural change and merchandising reorganization is impressive. First, the shoe floor has been totally overhauled so it’s cleanly reorganized by different zones as follows:

• Traditional brands such as Anne Klein, Ellen Tracy and Alfani.

• Comfort styles from such brands as Aerosoles, Clarks and Easy Spirit.

• A designer shoe zone with Stuart Weitzman, Michael Michael Kors and others.

“It’s a progression, with many different customer experiences,” Herndon said.

“Each zone will have its own look and feel,” added Gonzalez. “We wanted to make sure that we bring shoes together in a way that’s very impactful.”

Perhaps most dramatically, Macy’s is creating a two-level luxury wing for accessories and shoes on the Broadway side of the flagship, though officials are not discussing specific brands at the moment, pending final agreements. The most luxurious brand currently in the store is Louis Vuitton, which despite the high price point, is a big seller at Macy’s, encouraging the team to check out luxury brands.

Women’s shoes and the luxury wing are part of phase one of the Herald Square renovation. Phase one also includes a mosaic-tiled cafe serving Champagne, coffee, wine and food, and overlooking Herald Square and situated by the luxury section, while later this fall there will be main floor renovations of designer handbags and fine jewelry, and the addition of a restaurant on the sixth floor.

Shoes for the junior customer remain on the fourth floor. Men’s shoes are on the third floor.

Only a portion of women’s shoes opens today: traditional, Impulse, comfort, better, athletic and the shoe closets. The rest will be completed in late August or early September.

Asked what he thinks is the most compelling part of the shoe floor, Lundgren didn’t hesitate to mention improved service, Macy’s has distributed over 250 iPod Touch devices to associates who now never have to leave a customer’s side. The devices enable noncash transactions, and quick retrieval of products by sending photos to the eight stockrooms rimming the floor. The mobile devices also provide product information and can locate items that may not be on the premises but may be at other Macy stores or warehouses. Associates received over 50 hours of training on the technology and learning about the products. There’s a staff of over 430 on the shoe floor, including selling associates, managers, and “expediters,” who bring out the shoes to the sales associates.

“We’ve increased staff both in the front of the house and the back of the house and we are providing a lot of training in product and technology,” said Lisa Richards, vice president and a new store manager brought on just for the shoe floor. Herald Square, because of its large sales volume and square footage, is considered a district and treated as if it’s six different stores and therefore has six store managers, reporting to Patty Lee, the overall store manager.

In other upgrades, the historic clock on the Broadway facade is being restored and will be given a second face for the inside of the store; columns are being artfully encased to reference the fluted columns on the first floor, and the Broadway escalators are being remodeled and pushed back deeper into the store and won’t be walled off like other escalator banks, so the environment seems spacious.

Two 200-square-foot cutouts for the escalators were created. They give shoppers a strong visual connection between the main floor and the shoe floor. While some square footage had to be sacrificed to increase visibility, “The intention is to balance the customer experience with the need for high productivity,” said Herndon. “We believe we struck the right balance. Any loss of square footage will be offset by increased customer flow.”

Macy’s is also developing a drawstring bag to carry shoes as an alternative to the more cumbersome shoe box. However, it is keeping its historic wooden escalators, despite creating some new ones for the renovation.

Lundgren declined to project a sales volume for the shoe floor but did say, “It’s going to be like a big suburban store.…There will be the latest technology, the highest quality brands, the greatest service. You only get to do a renovation of this magnitude once in a lifetime.”