Macy's could ultimately decide to roll out leased Halloween shops at its stores. 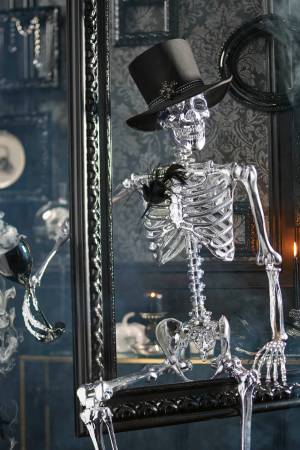 Macy’s will open a Halloween pop-up shop at its Herald Square flagship on Sept. 1, collaborating with Grandin Road.

It’s the first-ever Halloween shop for Macy’s, and the first pop-up shop for Grandin Road, an HSNi-owned direct marketer of home furnishings and decor. In the past, Macy’s hasn’t capitalized much on creepy crawlers and illuminated pumpkins, but the tie-in with Grandin Road suggests an opportunity to sell more products related to celebrating Halloween.

The 1,400-square-foot pop-up could also be construed as a test to see if a bigger partnership with Grandin Road, such as opening multiple Halloween shops at different Macy’s locations next year, could work. Macy’s has become very receptive to planting new ideas and experiences in its stores, including leased shops with Sunglass Hut, Motherhood Maternity, Starbucks, Lids and Best Buy.

For Grandin Road, creating a pop-up at Macy’s “is really about bringing the full brand experience to life,” said Jennifer Reeves, senior vice president of brand marketing at Grandin Road. “We’ve actually never done a pop-up shop before,” though she noted Grandin Road does operate a few outlets.

Asked if there could be pop-ups at several Macy’s locations down the road, she replied, “We’ll see how this works. Hopefully, we will have the ability to do more as we go forward.”

At Macy’s, Grandin Road will be a leased shop, with products also displayed in two windows on the Seventh Avenue and 34th Street side of the flagship. The shop will have four merchandise vignettes themed Frightfully Fun, Bewitching, Halloween Glam and Macabre and Mystical.

“Macy’s is known and loved for its place in bringing the holidays to life for customers across the country. The new Halloween at Macy’s Herald Square was designed with that tradition in mind,” said Shawn Outler, senior vice president of leased businesses for Macy’s.

While Halloween wasn’t a big priority in the past even though it is one of the highest-spending holidays in the U.S., “We’ve been interested in the Halloween business for a while,” Outler said. “This is the first time we have done something on this scale. The shop really allows us to leverage Grandin Road’s expertise in the space. They are great retailers for Halloween products.”

Asked if this could be considered a test for a bigger partnership with Grandin Road, Outler replied, “Absolutely. If this really works, we definitely see an opportunity.” While Macy’s is also interested in further developing its home business, Outler said the focus with Grandin Road at present is with its Halloween business.

Grandin Road was launched in 2003 and has been selling its Halloween line for over a decade. In 2015, Americans spent $6.9 billion celebrating Halloween, and $1.9 billion of that was on decorations, according to the National Retail Federation.