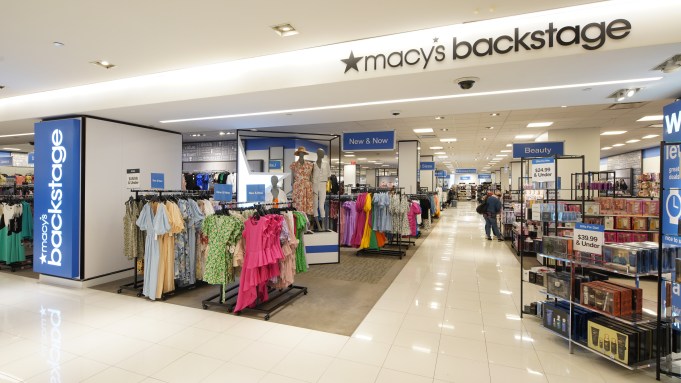 Backstage launches Friday inside Macy’s Herald Square, bringing the thrill of the “treasure hunt” for bargains across a wide spectrum of merchandise categories and brands and furthering the footprint of Macy’s burgeoning off-price format.

“We continue to evolve our footprint,” Michael Hersh, vice president of Macy’s Backstage, told WWD, during a walk-through of Backstage at Herald Square. There, Backstage has taken more than 15,000 square feet of space on the eighth floor. It feels like a store within a store, with its own entranceway; distinct blue and white signage and myriad T-stands on wheels for flexibility with the merchandising and display.

“This is an easy and efficient shopping experience with clear sight lines to all the different categories,” Hersh said.

The off-price sector is among the most consistently profitable in retail, and actually growing in appeal in light of soaring inflation and consumers being desperate to save money by bargain hunting. “Typically, Backstage offers 20 to 80 percent off department store prices,” Hersh said.

The off-price arena is dominated by TJX, Ross and Burlington, which Backstage competes against. They are all moderate and lower-priced offpricers.

Other key players in the off-price are Saks Off 5th, which specializes in discounting designer labels, and Nordstrom Rack, which is more moderate-priced compared to Off 5th but at a tier above TJX, Ross and Burlington.

Backstage at Herald Square is copiously stocked with just about all the key categories carried by Macy’s, including men’s, women’s and kids apparel and accessories, activewear, handbags, denim, footwear, fragrance, beauty products, luggage; toys, electronics, bath and body, candles, picture frames, bedding, gifts, even snacks, pet gifts and some New York City-centric souvenirs for tourists, like those foot-long Statue of Liberty replicas. It’s a mix of brands and items that may or may not have otherwise been sold at Macy’s. Merchandise is procured through upfront cuts, closeouts and opportunistic buys. New products arrive to the selling floor daily, and Backstage has its own distribution center in Columbus, Ohio, to expedite merchandise to the stores. Previously, the space was merchandised with seasonal goods, such as swim and outerwear.

Up front, there’s a “New & Now” framed podium for fashion trend statements that will change every four to six weeks. It’s currently merchandised with summery white sportswear and orange and printed dresses Nearby, there is a “Gifts for Dad” section, indicating items $39.99 and under, including Guess Seductive Red fragrance. Among other finds, there’s a bath and body section with products priced at $29.99 including items from Nicole Miller and Tahari; Tommy Hilfiger kids sets for $14.99;  Calvin Klein kids jumpsuits priced $14.99; candles priced $14.99 and under; Goodyear booster cables for $24.99; Puma performance tops, $14.99; Bebe activewear, $19.99; BCBG four-piece twin bedding sets, priced $17.

Part of the discount strategy is to encourage consumers to eventually graduate from shopping Macy’s Backstage to shopping Macy’s full-price, just like Saks Off 5th sees its shoppers over time graduating to Saks Fifth Avenue and Nordstrom Rack sees customers migrating to Nordstrom full-line stores. Of the three off-pricers, Saks Off-5th has the highest prices and highest concentration of high-end designer products, while Nordstrom Rack and Backstage are lower-priced overall.

Backstage is part of Macy’s efforts to diversify its brick-and-mortar portfolio, from being mall-based with large department stores to also having a significant off-mall presence by layering in smaller, specialized formats such as Market by Macy’s, Bloomingdale’s The Outlet and Bloomie’s — all of which are part of the Macy’s Inc. portfolio.

Bloomie’s, which launched last year with one unit in Alexandria, Va., offers contemporary and luxury brands, services, tech-enabled stylists, new store design concepts and a restaurant. Additional Bloomie’s locations are in the works.

Market by Macy’s, with three units in Texas and two in Atlanta, will also expand to additional markets. The specialty format has branded and private-label fashion, products from local designers and direct-to-consumer brands, food, an apothecary, plants, home items and a café.

Macy’s was a Johnny-come-lately to the off-price sector, long seeing no need to operate off-price units because its department stores had become very price promotional. It wasn’t until 2015 that Macy’s introduced the Backstage concept, after research indicated the company was losing share to off-pricers like T.J. Maxx, as well as the off-price sector’s high level of profitability. Macy’s needed to find new growth avenues.

Last September, Macy’s Inc. chairman and chief executive officer Jeff Gennette said the average price of an item at Backstage is $13 to $14, whereas at Macy’s full-line department stores, the average at that time was $35 to $36. At the Bloomingdale’s division, the average price, he said, was just under $100.

According to Gennette, 18 percent of those visiting Backstage also visit the full-line departments at Macy’s, and spend 29 percent more. “Those customers are very profitable for us,” Gennette said last year. “They are also younger and more diverse.”

While retailers of all kinds have been suffering from supply chain bottlenecks, it’s not quite the same situation with off-pricers. They would readily take in merchandise that arrives late due to factory and port delays that regular price stores would not necessarily want to display in their stores and on their websites. Off-pricers often pack away merchandise and sell it months or a year or so after receiving the goods.