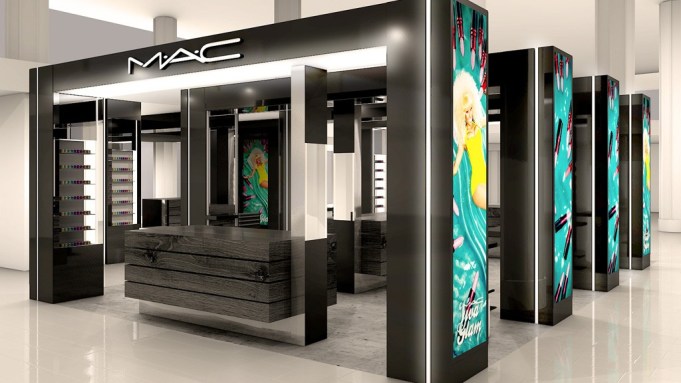 NEW YORK — Macy’s Herald Square, the behemoth of 34th Street, is in the early stages of transforming its beauty department with the aim of turning it into one of the most potent selling floors in the world.

Industry executives appear to agree. “It’s definitely a game-changer,” said John Demsey, a group president at the Estée Lauder Cos. Inc. “It’s one of the handful of the great beauty floors of the world, rivaling not only Bloomingdale’s 59th Street and Saks Fifth Avenue, but Selfridges and Harrods in London, Galeries Lafayette and Printemps in Paris and Isetan in Tokyo.”

“They can change that whole neighborhood by doing it right,” said Don Loftus, president of Parlux Ltd. and executive vice president of Perfumania Inc. “It’s the second-largest tourist site in Manhattan and possibly in the country. It’s almost all out-of-towners. It’s a real stage for our category. It can have an impact. When I shop Harrods, I remember specific departments like the pet department and food hall for the experience — it’s memorable. And I think that is what Macy’s is creating: a very memorable experience. I hope it makes everyone say, ‘How can we do that on a smaller scale in our city? How do we bring back the fun theatrics of retailing, what it used to be?’ Because right now, it’s pretty dull.”

“Herald Square has achieved something that is very difficult to do, said Thia Breen, a group president for the Estée Lauder Cos. Inc. “Retailers tell you, ‘There’s no bad space.’ Here, there truly isn’t. We’ve put our latest, greatest designs in there, so it’s going to be the best that we have to offer. This is going to be one of the best-performing beauty departments, in terms of volume, on a global basis.”

“It’s such a beautiful historic building, which wasn’t taken advantage of as a luxury shopping space,” said Carol Hamilton, president of L’Oréal Luxe USA. “They’re bringing it back to its full glory. It’s a fantastic move for Macy’s. The way they designed it, I believe, is going to showcase our brands in a much better way than before. It will have the latest installations and the greatest thinking from everyone in beauty at the same time, which makes a huge difference. And the way they’ve organized the space, with the women’s fragrance department and the use of the balcony, will be quite celebratory and luxurious. We’re going to be in there with Kiehl’s, which was a major decision — it’s really because we feel it is the most important retail door in the world. We know that there’s a global shopper at Macy’s — and they will attract a lot more as a result of this installation.”

“The renovation of Macy’s Herald Square is one of the most important, single-door renovations in the world,” added Lynne Greene, another group president of Lauder and global president of Clinique. “This store is a beacon to international travelers from all over the world; therefore, the store design must be the best of each brand accompanied by the most innovative design. With these elements, [chairman, president and chief executive officer] Terry Lundgren will have a state-of-the-art global flagship. Macy’s Herald Square is a world destination that epitomizes the revolution, which Terry has led in department store retailing.”

The importance of the renovation — part of a $400 million overhaul of the door, which began in 2012 and is expected to be completed by 2015 — also is underscored by the heightened expectations of growth bubbling up in the market. While Macy’s executives declined to discuss figures, a number of industry executives expect growth rates of 10 percent to 20 percent or 25 percent on existing beauty sales at Herald Square. For the entire floor, including the newly added brands, projections of sales increases range as high as 40 percent for the first year. Industry sources believe Macy’s did between $100 million and $110 million last year in retail beauty sales. Calculations based on those industry estimates indicate that the new beauty floor could conceivably generate more than $140 million in annual retail sales, once the floor is finished.

The entire beauty floor will not be done until Nov. 1, but a revamped women’s fragrance department that runs along the 35th Street wall opened June 18 and a men’s department and a series of shops on the 34th Street side are due to open Saturday.

The men’s and fragrance departments are the vanguard of what will be an enlarged 27,000-square-foot beauty department spanning the cavernous area between the two main escalator banks of the main floor. The new floor will be 4,500 square feet larger than its predecessor, a 17 percent increase. The last time the beauty department was completely redone in one massive project — rather than revised on a piecemeal basis with each brand addition — was during the halcyon days of the late Seventies and early Eighties.

Muriel Gonzalez, the retailer’s executive vice president and general merchandise manager of cosmetics, fragrances and shoes, said, “We really utilized the space. It hadn’t ever been designed,” she noted, adding that the floor simply evolved organically over the years. But the new design, she said, represents “a very balanced” effort.

“It enabled us to have a world-class assortment and world-class quality shops,” said Gonzalez. “Not only did our existing important brands — like Estée Lauder, Dior, Chanel and MAC Cosmetics — build world-class shops, but we were also able to design the floor in a way that allowed us to balance large lines and new lines, broad lines and more niche lines. So we were able to add to our assortment a significant number of new businesses.”

She drove home that perhaps the most significant point is that Macy’s was able to recruit higher-priced brands. “The more luxury lines were a void in our assortment,” Gonzalez said, adding that the store previously lacked the proper atmosphere and space. Times have changed.

“We know from our success with Louis Vuitton, for example, that it’s a completely discrete and separate business,” she said, adding that the tourists flooding into the store are looking for those brands. More than six million tourists — with the majority coming from the U.K., Brazil, Canada and China — pass through the Herald Square store annually, she said.

“Now we have both the atmosphere and the square footage to add brands like La Mer, Jo Malone and Kiehl’s and to have them be completely incremental to the great business we already do.”

Still, don’t look for the format to be rolled out to other stores in the chain. “This is a very specific store, and we can do things here that we can’t do anyplace else,” said Gonzalez. “But I think that we will begin to find other Macy’s locations that might be appropriate for specific brands that we can roll out.”

The new men’s fragrance section, located on the northwest corner at the Seventh Avenue and 35th Street sides of the building, will cover 4,000 square feet, an increase of 1,200 square feet over the previous space. The assortment will be anchored by the Estée Lauder Cos.’ Lab Series and Procter & Gamble’s Art of Shaving, giving the department a men’s skin-care focus, which the store did not have before.

The row of shops along the 34th Street wall include Chanel, Lauder’s Bobbi Brown and MAC Cosmetics, L’Oréal’s Kiehl’s and Impulse Beauty, the specialty department launched by Macy’s as an answer to specialty store competition.

As for the challenges ahead, one industry executive said Macy’s will have to prove itself in the luxury arena and he has no doubt the store will succeed. Another executive said, “There is an opportunity for them to drive basic business and to be less promotional.”

The traffic pattern of the floor will be dramatically changed by the reopening of the Memorial Door on the 34th Street side, one door west of Broadway. That door — which was dedicated to the memory of Ida and Isidor Straus, who died in the 1912 sinking of the Titanic — had been closed up since 2003. It is due to reopen on Aug. 18 and a new corridor will be built, leading from the reopened door and running across the floor to the middle of the women’s perfumery, which lines the 35th Street wall. It will intersect with a central corridor, running the length of the department from east to west, and the new configuration will pump traffic into the heart of the department. There will be aisles running parallel to the 34th and 35th Street sides.

Demsey pointed out that Impulse Beauty has been moved to a more central position in the store.“This is the first time you’re seeing Impulse as a serious alternative to Sephora,” he said, adding that Impulse Beauty now has brands like Urban Decay and Smashbox that also are featured in Sephora. “Not only do they have brands that are in Neiman’s, or Saks, Bloomingdale’s or Bergdorf’s, they [also] have brands that are in Sephora.”

Alex Choueiri, general manager of the International Designer Fragrances Division at L’Oréal USA, said he was pleased after hearing the plans. “It’s all going in the right direction in terms of being more upscale department store, less cluttered, more easy to navigate for the customers and giving a much more pleasant experience. It is going to become more of an area where you could browse without feeling in any way attacked by the crowds. The amazing thing in that store is the number of people who enter the store every day, the great traffic Macy’s has. All those customers are going to be having a much better experience. It is going to allow us to showcase some of our brands in a much more upscale and luxurious way, which is a very positive thing.”