The windows are conspicuously framed in styrofoam and silver glitter. 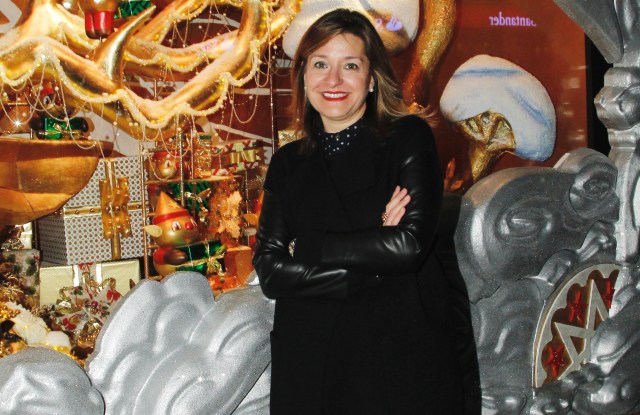 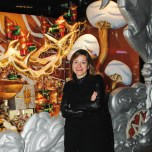 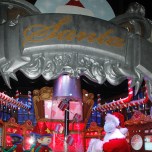 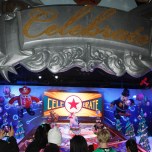 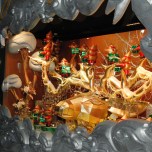 With dancing elves and a flourish of fireworks and confetti projected off its giant flagship, Macy’s on Friday evening unveiled its holiday windows in grand style to hundreds of onlookers crowded on Herald Square along Broadway.

And the crowds are not expected to let up, as Macy’s estimates that during peak shopping periods, more than 10,000 people an hour will pass by the windows.

This year’s installations are among Macy’s most intricate and message-driven, filled with color, whimsy, fantasy, technology and interactive elements. The six windows, which are all along Broadway, each convey a particular sentiment or theme of the season — “love,” “giving,” “believe,” “being together,” “celebrate” and “magic.” The “together” window is a tree house of life with videos depicting different kinds of families engaged in holiday activities like sleigh-riding.

The “love” window depicts Mr. and Mrs. Santa dancing together in front of a big heart. The “magic” window is moody, with its dreamy purplish hue and Santa and reindeer apparitions in a North Pole setting by an ice-covered pond filled with jelly fish. Santa is making final preparations on the night before Christmas. And the “celebrate” window is a large vintage-style pinball machine with buttons on the glass to push to launch a pinball toward three bumpers that light up when struck.

“We wanted to focus on the idea of what Christmas meant to us as children,” said Roya Sullivan, Macy’s Inc. national director of window presentation, explaining the premise behind the installation. “In thinking back to those feelings, we kept returning to the idea of six key qualities that truly exemplify the spirit and magic of the season.”

Windows aside, one can’t help noticing the 15-foot-tall Santa atop the marquee over Macy’s entrance, or how each window is strikingly framed in styrofoam covered by silver glitter. “We used 600 pounds of the silver glitter,” Sullivan said. “The idea is to entice people from across the street.”

Just around the time Macy’s holiday windows get taken down, that’s when Sullivan and her team — display artists, graphic artists, sculptural artists, animators carpenters, electricians, music and sound experts, 250 in all — are back at it, developing next year’s batch of holiday windows. It’s virtually a year-round process, including eight months of planning and building the windows. “It takes a full month alone, just to install these windows,” Sullivan noted.