The 8,000-square-foot shop is located on the third floor of the flagship. 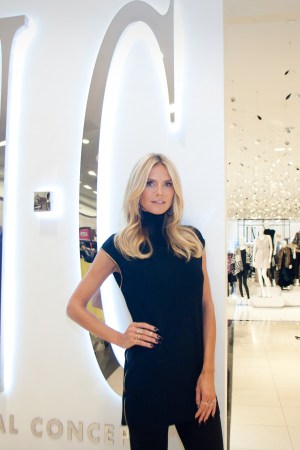 NEW YORK – Macy’s is marking the 30th anniversary of its INC  International Concepts private brand and hopes the celebrations will spur sales increases for the private-label collection.

The retailer has hired Heidi Klum and Gabriel Aubry to serve as faces of the brand and, on Thursday, unveiled an 8,000-plus-square-foot shop at its Herald Square flagship.

“This shop has been in the making for over nine months,” said Nancy Slavin, senior vice president of marketing for Macy’s Merchandising Group, in a walkthrough of the third-floor shop. “It’s the jewel in the crown.”

The shop is designed to be “fresh, modern and feminine without being girly,” said Laura Harsch, vice president of branded environments for Macy’s.

A center aisle is designed to highlight the different parts of the assortment with the anniversary capsule collection, casualwear and denim each having distinct homes.

Although there are no hard walls to segment the shop, signage with bold lettering and over 1,200 chromed wings hanging from the ceiling are clear differentiators.

“It’s a way to draw the customer,” Harsch said.

The windows to the street have also been revealed, allowing natural light into the space and better utilizing an area that was formerly used as a stockroom.

“We wanted it not to be intimidating but open and inviting,” Harsch said. “There are delineated screens but it doesn’t feel confining.”

The shop also includes large video screens that are showing images from the television commercials, print ads and the social media campaign.

“From a marketing perspective,” Slavin said, “it allows us to broadcast the marketing story.” The content will be changed quarterly or more frequently, she said.

An INC men’s shop will open in mid-October, Harsch said, when the renovation of the store’s men’s departments has been completed.

Harsch said the shop, which will be around 2,700 square feet, will have some similar elements to the women’s one, but “in a more-masculine way.” The design will be darker with black chrome accents and graphite walls, while the women’s is stark white.

Denim in particular has gotten a major bump up in visibility in the women’s shop. Rather than hanging on hangers, it is now showcased in denim bars with the different fits clearly designated.

“We’re making a big statement around denim,” Slavin said. “It’s what she looks for from us.”

Other INC products such as jewelry, bags and shoes that complement the apparel are also merchandised in vitrines around the floor. They are also showcased in classifications departments elsewhere in the store, Slavin said.

The brand targets a fashion-forward customer and has hit all the highlights of the season, including fringed ponchos, lace-up blouses, faux leather and fur.

Harsch said the intent it to roll out some of the elements from the Herald Square shop to some of the branch stores with an updated design, the denim bar, large-scale graphics and updated mannequin presentations. “We will take our effective merchandising learnings from Herald Square to all doors,” she said.

Although Macy’s has declined to say how large the business is, it is viewed as one of the company’s most important brands.

Macy’s is hosting a party to celebrate the brand on Thursday night at the IAC Building during New York Fashion Week. Klum, who was wearing skin-tight faux leather pants and a tunic with zippered details to visit the shop in the morning, said she’d be donning a “sexy, tight black leather dress” for the evening event.

Bringing back Klum, who had modeled for the label 15 years ago, is an important part of the celebration. “She’s now the age of the core customer, so it’s the perfect storm,” Slavin said of the 42-year-old model and media personality. “She embodies the brand.”

“Gabriel has a supporting role,” Slavin said. “Customers really respond to him on social media. And he looks great in the clothes.”

“I’ve only been part of it for 20 years,” he said, noting that when he joined the company from Neiman Marcus, he was chief merchant for Macy’s Merchandising Group so quickly got a bird’s-eye look at the brand.

“It was a very different brand then,” he said. “But what has not changed is the INC customer’s passion for fashion.”

Lundgren said having Klum and Aubry represent the brand in its anniversary campaign was a no-brainer.

“Who else would you want modeling your clothes,” he said, pointing to Klum. “No one.”

But…what about Aubry? “I hate him,” Lundgren said. “He has the whole package. He even plays golf.”