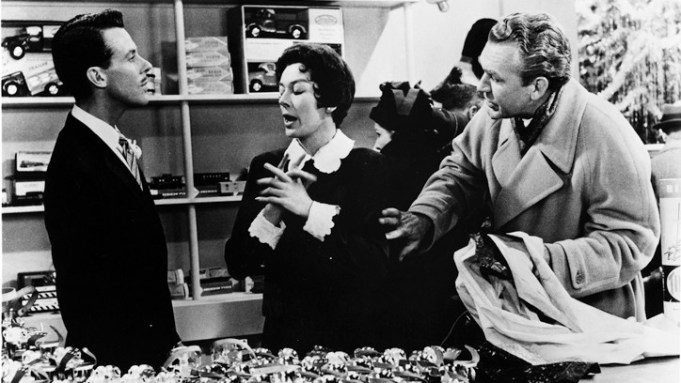 No retailer has been immortalized on film quite like Macy’s.

Sure, Saks Fifth Avenue gets name-checked in Clueless and Shrek 2 (the latter as Saxon Fifth Avenue) and Marshall Field’s gets paid a nice salute in The Star when Bette Davis pretends to be an alum of its lingerie department. But can any of those shops boast an impressive credit roster ranging from silents such as The Girl From Macy’s and The Kleptomaniac to the camptastic Auntie Mame and action flicks Mr. & Mrs. Smith and Ocean’s Eleven? The store’s simply iconic—a go-to, instant-recognition metaphor that on celluloid stands for everything big, grand and fantastic.

In Bob Clark’s Porky’s comedy, some off-color banter about condoms eventually leads to a punch line involving the store’s return desk. (Don’t ask.) Another example comes courtesy of Bette Midler, who evokes the retailer when cracking wise about her Rubenesque figure in Big Business. Playing Lily Tomlin’s improbable twin, Midler gripes: “I don’t see how it is that you, my own sister, can stuff your face and nothing happens. I subsist on 60 calories a day or else blow up like a Macy’s stage float.”

As for the ranks of Macy’s salesclerks on the silver screen, there are plenty. Alice Faye plays one enjoying a cruise vacation in the 1941 Week-End in Havana, while Yolande Donlan is a shopgirl bumped up to royalty status when she inherits the fictional European principality of Lampidorra —land of schnapps-laced alcoholic cheese—in 1953’s Penny Princess. The Young Lions has Montgomery Clift, opposite Dean Martin and Marlon Brando, as a store employee off to WWII in a film based on the Irwin Shaw novel.

And then, of course, there’s Natalie Wood’s turn as pregnant salesgirl Angie Rossini in Love With the Proper Stranger, which garnered her an Oscar nomination in 1963—16 years after she’d turned heads as a fresh-faced nine-year-old in the most Macy’s-centric movie of them all. Indeed, when it comes to the company’s film moments, there’s no greater classic than Miracle on 34th Street. The original 1947 version kicks off with its annual Thanksgiving Day Parade, the scenes for which were actual parade shots from the previous year. That really is actor Edmund Gwenn (as Kris Kringle) waving to the New York crowd up high on his Santa Claus sleigh, and Maureen O’Hara (Doris Walker) standing idly on the sidelines, peering over heads for a closer look. In fact, it’s reported that O’Hara had to cut short a vacation trip to Ireland and rush back—rather reluctantly—to make the event in time.

Everyone’s familiar with the film’s plotline—holiday goodwill and all that—but central to it all was the very real rivalry between Macy’s and the now-defunct Gimbels. Their famed tug-of-war even crept into the vernacular, with the popular phrase “Would Macy’s tell Gimbels?” (In other words, no sharing with the competition.) Here, a young girl approaches Mr. Kringle as the department store Santa, requesting roller skates for Christmas. He sends her off to Gimbels for a better pair and, with that, sets off a chain of events leading to a new altruism-based merchandising policy at Macy’s. “We’ll be known as the helpful store…the friendly store, the store with a heart,” remarks R.H. Macy, played by Harry Antrim. Soon enough, each salesperson is equipped with “a shopping guide of convenience,” featuring the merch at competitors Bloomingdale’s, Hearn’s, McCreery’s and Stern’s—and Gimbels, natch. It even spawned several remakes for the big and small screen (although in a 1994 film version, the Macy’s name was changed to Cole’s).

And speaking of Macy’s and skates, what about the timeless Auntie Mame, starring Rosalind Russell? Who can forget the slapstick scene where Mame, as a roller skate salesgirl at Macy’s during the busy holiday season, bungles a costumer’s purchase because she doesn’t know how to write up a cash sale? “The only sales slip I know how to make is COD,” she explains. Needless to say, Mame is promptly fired—but not before dramatically yelling into the crowd, “Don’t forget the skates for the little nippers. Get ’em at Gimbels!”

In the 1954 flick Living It Up, meanwhile, Janet Leigh fires off the drollest of threats to Jerry Lewis, whose character has been pretending to be deathly ill for sympathy and monetary perks. “They’ll boil you in oil in Macy’s window after they marinate you for a week in Gimbels,” she remarks. And even though the latter closed for good in 1987, that didn’t stop Vince Vaughn, as sidekick Eddie in 2005’s Mr. & Mrs. Smith, from dubbing Angelina Jolie and Brad Pitt’s battling spy duo as Gimbels and Macy’s. (On the small screen, the store rivalry gets referenced in everything from I Love Lucy to The Simpsons.)

Of course, no account of Macy’s cinematic moments would be complete without mentioning George Cukor’s romantic comedy, It Should Happen to You. A plucky Gladys Glover, played by Judy Holliday, achieves fame and stardom by doing nothing more than buying a billboard at Columbus Circle, which she soon emblazons with her name. That one sign soon turns to six, scattered all over Manhattan. Her favorite one, however? The billboard sitting squarely across from the Macy’s Herald Square flagship, where she ends up being mobbed by autograph seekers while shopping for 69 cent utility towels.