The world's largest store is about to get even bigger through a sweeping, four-year renovation that will impact almost every part of the flagship. 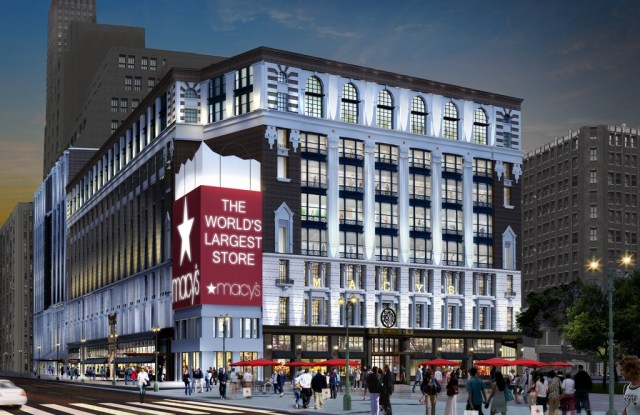 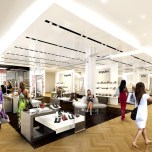 NEW YORK — Macy’s Herald Square, the world’s largest store, is about to get even bigger through a sweeping $400 million, four-year renovation that will impact almost every part of the flagship, WWD has learned.

This story first appeared in the November 1, 2011 issue of WWD. Subscribe Today.

The project, in its magnitude and holistic approach, is unprecedented, considering renovations of the 110-year-old site have been piecemeal in the past. Among its most dramatic elements: creating another 100,000 square feet of selling space to bring the total to 1.2 million square feet, adding a string of luxury shop-in-shops to broaden its appeal and building what Macy’s bills will be the largest shoe department in the world.

New technologies and media will be sprinkled throughout the giant store, including interactive directories, streaming live videos of Macy’s events, digital product information and a mobile app to guide customers as they shop. The overhaul will begin next spring and is seen continuing through fall 2015.

Aside from being the largest store, Macy’s Herald Square could be considered the most paradoxical. The store is highly trafficked, drawing 20 million shoppers a year from all over the world, yet widely maligned. Criticisms range from being difficult to navigate and overly promotional, to decaying infrastructure and poor housekeeping, though considering the crowds — 50,000 people on average daily and 75,000 during the peak holiday periods — it’s difficult to keep the polos properly folded and the facilities neat and tidy.

According to officials, the company is committed to spending $400 million in capital over the next four years, improving everything from the bathrooms and historic wooden escalators to adding 300 more fitting rooms. In addition, Macy’s will muscle designers and vendors for tens of millions of dollars beyond the $400 million, to update or build shops. The retailer said that it’s able to add significant square footage for selling by converting some storage and office space and extending the mezzanine level.

“Macy’s Herald Square is our company’s most productive store, and experience shows that improvements in this location consistently result in higher customer traffic and sales volume,” said Terry J. Lundgren, chairman, president and chief executive officer of Macy’s Inc. “Our upcoming top-to-bottom remodel represents an investment in the future growth of our business as New York City continues to evolve as a world capital and shopping destination.”

Macy’s declined to specify the flagship’s volume, but sources estimate the store has about $850 million in sales and has been doing well lately, after taking a hit during the recession. The store eventually is likely to eclipse the $1 billion mark, given the growth in space for key categories such as shoes, handbags, cosmetics and fashion brands for millennial-generation customers, though the majority of every floor and virtually every department, as well as the exterior, will be improved. During the construction, the store will remain open, though some departments will be shifted temporarily.

Seemingly aware of the longstanding shopping issues that have dogged the flagship despite its popularity, Lundgren said the project is intended to create “a modern, customer-centric shopping experience” to reflect “how a new generation of customers prefers to shop. In many cases, product will be organized by lifestyle to help customers create looks and build wardrobes across categories.”

At the same time, he said Macy’s is being careful “to preserve and restore the historical integrity of this landmark building….Blending Macy’s architectural legacy with advanced technology and contemporary design is what makes this project so special.”

The first portion of Macy’s Herald Square (the majority of the current Broadway building) was opened in 1902. The store was expanded in three phases to its current form reaching Seventh Avenue by 1931. The building has nearly 2.2 million gross square feet, 11 selling floors, the New York corporate office, with merchandising, planning, marketing, visual merchandising and various other office functions — though these areas are not involved in the remodel; it’s only the store itself. The structure is actually four buildings constructed in phases side by side, in 1902, 1924, 1929 and 1931. It flows, though there are differences between the Broadway and Seventh Avenue sides.

Details of the project are expected to be disclosed today at a press conference, but WWD has learned that the remodel calls for a new hall of two-to-three-level luxury handbag and shoe shops, including revamping the highly productive Louis Vuitton shop so it’s multilevel.

Macy’s is also boasting that its shoe department on level two will have 39,000 square feet of selling space and total 63,000 square feet with stockrooms. About 300,000 pairs of shoes will be available every day, and the floor will also have a coffee/wine/chocolate bar for recharging. Asked how Macy’s knows it will be the world’s biggest shoe shop, corporate spokesman Jim Sluzewski replied: “We measured. We know this one will be the largest.”

As far as real dining, there will be “a complex of casual dining experiences” including concepts created by Macy’s Culinary Council of celebrity chefs and a brew pub that stays open past normal store hours. Food offerings will be bolstered to 22 from 11, including a new table-service restaurant on the sixth floor with windows on Broadway and views of the Empire State Building and Midtown.

The main floor’s “great hall” for cosmetics, fragrances and fine jewelry will be remodeled, as will the Impulse department on two for contemporary apparel and accessories for the millennial customer. A new “mstylelab” presentation of juniors and young men’s on the lower level will be rigged with the latest retail technologies and services, including a nail bar and salon.

■ Men’s wear will be expanded to cover about 200,000 square feet of selling space over seven floors of the Seventh Avenue side of the store.

■ Home on eight and nine will be overhauled, with an enhanced demonstration kitchen, the De Gustibus Cooking School, and elements of The Cellar moving up from the lower level.

■ The exterior will be restored, and windows concealed for years will be uncovered, sidewalks replaced, and canopies added, hearkening back to the early days of the store. The original wooden escalators will be preserved, except for one that’s being removed to provide spare parts for the remainder. Also on the infrastructure side, systems to improve environmental sustainability, including a new state-of-the-art energy management system and expanded use of LED lighting, will reduce annual energy use by 15 to 20 percent.

Macy’s internal planning, design and construction team is leading the renovation with master planning support from Studio V Architecture of New York. Components were designed by Highland Associates and Kevin Kennon Architects, both of New York, and Charles Sparks + Company of Westchester, Ill. Macy’s said the project will create 1,600 construction jobs, and that by fall 2015, about 800 store positions will be added to the current workforce of about 4,600.