Gucci, Louis Vuitton, Burberry and Longchamp will be showcased front and center on the Broadway side of the Herald Square flagship beginning in November. 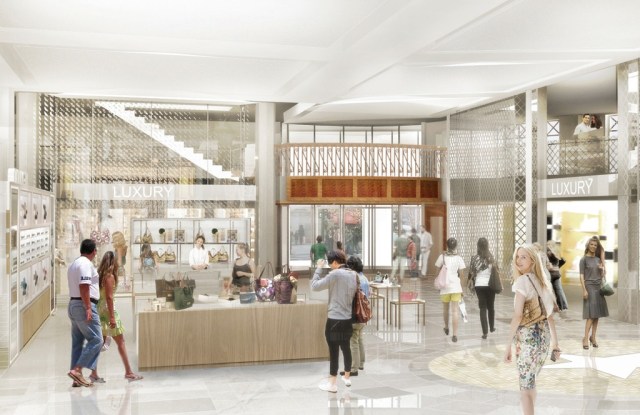 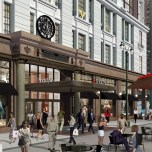 NEW YORK — Luxury will be the new welcome mat at Macy’s Herald Square.

Four major luxury brands — Gucci, Louis Vuitton, Burberry and Longchamp — will be showcased front and center on the Broadway side of the flagship beginning in November in a “luxury hall” under construction as part of the store’s four-year, top-to-bottom $400 million renovation, WWD has learned.

“This is not just a little luxury corner. This is going to be powerful,” Terry J. Lundgren, Macy’s chairman, president and chief executive officer, told WWD. Macy’s luxury shops will be the largest in-store shops for all of the brands involved, second in size only to each brand’s freestanding flagship locations.

It’s an image raiser for the mid-tier Macy’s, though the Herald Square flagship, considered the third-most trafficked tourist attraction in the city next to the Empire State Building and Statue of Liberty, draws 20 million visitors annually from all over the world and from all demographics, even those shopping Vuitton’s $2,600 leather clutches and canvas bags.

Vuitton and Gucci will be right off the main Broadway entrance, on the 34th Street and 35th Street sides, respectively. Burberry and Longchamp will be right behind. Macy’s, in conjunction with Studio V, designed the luxury hall.

Vuitton’s track record at Herald Square has been “spectacular,” said Lundgren. “I am sure other luxury brands have noticed, which is why it was an easy sell to add these other luxury brands. We never actually approached them before, but when we described our vision for the renovation of the flagship, it was clear they wanted to be part of it.”

Lundgren also pointed out that this is the first time a concentration of luxury is coming to Herald Square. “That is a major motivation for these luxury brands. They have no representation” in the Herald Square market. With Macy’s, he added, “There’s an assurance of excellent luxury customer traffic. We know so many of these customers do not venture uptown.

“When we were contemplating this renovation,” Lundgren continued, “we knew we didn’t want it to be another one of those projects which you come back to a year or two later and decide you have to change the floor again. We decided we were going to do this just one time. We traveled around the world, throughout Europe, to Paris, Madrid, London, to Japan, China, Korea, to think of the best ideas to create the most exciting department store in the world. In all cases, the retailers we were most excited by had some level of luxury, particularly handbags and footwear, and that’s something that has not been strongly represented at Macy’s Herald Square.”

Two years ago, a master plan for the flagship was conceived to remodel virtually all of the 1.1 million square feet of selling space in the 2.2 million-square-foot flagship, which generates $850 million in annual sales. Over the years, Macy’s floors got divided and filled up with walls, dropped ceilings, mechanical equipment, and endless renovations that cut off sight lines and obscured the original architecture. The renovation aims to eliminate the claustrophobia by uncovering windows, pushing the Broadway escalators 50 feet back into the store, raising ceilings, providing long vistas down two wide main aisles so as not to miss anything, and maximizing the best categories like accessories and shoes. The flagship already boasts the world’s largest shoe floor at 39,000 square feet for selling. Macy’s is out to restore the original grandeur and architectural features of the 110-year-old Beaux-Arts site (the Seventh Avenue building was added in 1937), including the iconic wood escalators and fluted columns, but with a clean, white and contemporary environment.

In a tour of the luxury construction, Tom Herndon, senior vice president of store design, said customers will be impressed by the feeling of entering “a great hall of retail originally conceived in 1902” that captures the past grandeur and extends to fragrances and cosmetics.

Macy’s also intends to increase the selling space by 100,000 square feet, including extending the mezzanine by 11,000 square feet, and creating two, 200-square-foot cutouts by the Broadway escalators so there’s a strong visual connection linking the luxury and shoe floors.

In other upgrades, there will be an express elevator to the sixth floor, where a restaurant opens in November; entrances are being transformed into welcoming “portals”; the marble mosaic floors are being extended; LED lighting is being added, and escalators and “grand” staircases will be created to lead to the mezzanine and luxury shops.

The high-end feeling is sustained with luxury accessories leading to renovated areas for Coach, Michael Kors, Dooney & Bourke and Ralph Lauren accessories on one. Similarly on two, the luxury shoe shops lead to the designer shoe salon including Calvin Klein, Donald Pliner and Charles Jourdan. On Saturday, the Herald Square Cafe opened on the second floor serving Champagne, Vosges gourmet chocolates and Starbucks Reserve. It overlooks Herald Square and is separated from designer shoes by a wall of glass embedded with fabric.

Could all this upscaling intimidate Macy’s core middle-class market? Lundgren thinks not. “The way we laid out the store, we are still Macy’s, but this is a very unique location. We need to be able to satisfy all of our customer demands. From all the data, and we study our customers very closely, there is a high level of demand for luxury products in Macy’s Herald Square,” particularly handbags, accessories and shoes. Luxury ready-to-wear appears not to be in the cards, though in the Eighties Herald Square had a department called Little Shops selling expensive designer rtw. Asked if a luxury buildup could occur at other Macy’s locations, too, Lundgren replied, “I am primarily focused on Herald Square because of the tourist element.”