The initiative will kick off next month with a variety of events, special fashion collections, a give-back program to benefit U.S. war veterans and more. 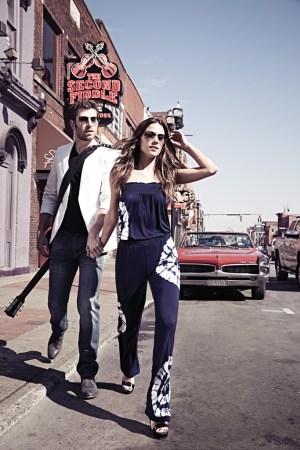 Now in its second year, Macy’s American Icons initiative will be reprised next month with a variety of events inspired by America’s favorite pastimes, a give-back program to benefit U.S. war veterans, special fashion collections and celebrities.

American Icons will be featured in all Macy’s fashion, apparel and accessories doors.

“The customer absolutely loves this,” said Martine Reardon, chief marketing officer. All-American iconic music plays in the stores, which gets the customers and the associates excited. “[Last year] they were literally dancing in the aisles. It’s one of our most successful initiatives. It put some theater back in the store.”

Macy’s will once again partner with the veteran empowerment initiative Got Your 6 (which in military terms means “I’ve got your back”), which is dedicated to improving veteran reintegration and putting their skills to work at home. The coalition focuses on jobs, education, health, housing, family and leadership. Macy’s 2013 “American Icons” campaign raised more than $3.4 million to support the work of the coalition partners, including the Pat Tillman Foundation and Student Veterans of America; Team Rubicon; the 100,000 Homes campaign, and Hiring Our Heroes.

Beginning May 17 with “Got Your 6 Saturday,” customers can give $3 at any register and receive a 20 percent off savings pass for any day they choose. One hundred percent will be donated to Got Your 6 and its nonprofit partners.

Other highlights of the program include:

• Macy’s customers will be able to shop for exclusive merchandise — which will be designated American Icons — from such designers as Calvin Klein white label, Tommy Hilfiger, INC International Concepts, Michael Michael Kors, Nautica and Finish Line. The collections will be available in stores beginning in early May through the end of June. Lochte and Baldwin will appear in a new print, digital and in-store American Icons ad campaign for Calvin Klein.

• Also part of the initiative is a capsule collection of dresses, designed by actress and musician Zooey Deschanel and Tommy Hilfiger, named “To Tommy, From Zooey.” It is currently available in about 200 Macy’s stores. In addition to the dresses, Hilfiger has specially selected American Icons merchandise available in women’s, men’s, kids, home, swim and shoes.

• The campaign for INC, exclusively at Macy’s, features country music stars Eldredge and Kramer. Set in Nashville, the two will be featured in print, digital and in-store advertising wearing various pieces from INC.

• Actress and singer Lucy Hale will represent American Rag, available exclusively at Macy’s, through the duration of the American Icons campaign.

As part of American Icons, customers will be able to participate in a variety of events and programs throughout the country, including Macy’s Great American Country Fair, which will take place in more than 20 cities. Other events include Macy’s Great American Pop Quiz and 4th of July Sweepstakes, and Macy’s Day at the Ballpark, where shoppers can win a pair of tickets to a Minor League Baseball game in select stores when a qualifying men’s purchase is made. There is also Macy’s Great American Grilling Guru, where customers can enter their best grilling recipe through Macy’s Culinary Council sitelet (macys.com/culinarycouncil) from April 15 through May 3. Local semifinal cook-offs will take place across the country on June 7, with six regional winners competing in the national “Sizzle Showdown” competition on June 28 in New York City. The winner will receive $10,000 and a trip to the 2015 Macy’s 4th of July Fireworks.