Macy's today rolls out the unconventional retail format it purchased a year ago.

A Story shop at Macy's.

Macy’s Inc., in one of its most innovative maneuvers to date, today launches “Story at Macy’s” concept shops at 36 of its U.S. locations.

The shops will average 1,500 square feet in size; have customized, flexible fixturing, and, similar to the original Story store at 144 10th Avenue in the Chelsea section of Manhattan, will change their merchandise theme, products and decor every two months. For the inaugural Story at Macy’s, the theme is color and the shops will sell at least 70 vendors, primarily small ones, and display about 400 items for men, women and kids.

The sale of Story to Macy’s was a surprise move considering Macy’s has lately been more into streamlining than acquiring, though the deal reflected the department store’s intention to bring new experiences and products to its selling floors. Over the last few years, Macy’s has established Backstage off-price departments and the “Market @ Macy’s,” where a handful of brands not typically carried at the retailer can sell their products for a temporary time, like a pop-up, while the space is manned by Macy’s personnel. The retailer also has a partnership with B8ta, which sells the latest electronic gadgets.

When Macy’s bought Story (for an undisclosed amount), Shechtman joined the company as brand experience officer to help devise new in-store customer experiences and integrate Story as a format for the store. Macy’s has kept the specifics of its Story strategy under wraps until today, and in an interview with WWD, Shechtman emphasized there’s been plenty of work behind the scenes in integrating the two disparate businesses, including staffing up and creating systems to accommodate small vendors “on-boarding” to the $26 billion Macy’s juggernaut.

“Another vital thing is to deliver an amazing narrative-driven experience for our customers. It’s a complicated project. We have been reimagining lots of systems and processes [to find] what’s under the hood of the car. We developed systems to make it easy for small vendors to work with big companies and for streamlining the onboarding process.”

A Macy’s Story team was created with managers at the 36 doors, regional managers, and more than 250 part- and full-time sales associates, who are being called “storytellers.” They participated in a “know and tell” training program to learn about everything from building fixtures to customer engagement and event production. Among those joining the team is Jenny Shechtman, who was Story’s chief operating officer and is now vice president of operations for Story at Macy’s.

“Herald Square is kind of an anomaly,” said Shechtman, explaining that at the New York flagship, Story will occupy 7,500 square feet, with space on the main floor and on the mezzanine and with an event area. The shop is roughly five times larger than other Story shops at Macy’s stores, and there will be products from about 110 vendors at the Herald Square Story shop, rather than the 70 or so at other locations.

For the “color” theme, Levi’s Kids, which is manufactured and distributed by Haddad Brands, as well as Crayola and MAC Cosmetics, are sponsors.

Levi’s Kids has created exclusive back-to-school fashions for Macy’s, some of which are being displayed at Story at Macy’s in advance of the season. Crayola and Levi’s Kids are teaming up on a “create-it-yourself” event, where kids can decorate their Levi’s denim jackets and T-shirts with Crayola patches. MAC will have a “make-your-own” palette station at most Story at Macy’s shops and will stage beauty classes with makeup artists. Overall, events and classes for the Color themed Story shops will focus on self-expression and creativity, Macy’s said.

Among other products for the color theme, Story at Macy’s will sell an online kids’ brand called Primary, marking the line’s national debut, and gourmet chocolate bars and doughnuts from Compartes, a Los Angeles-based chocolatier. 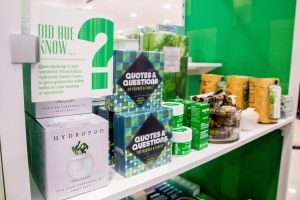 A display at Story at Macy’s, in the green zone of the shop.

David Stark has designed the first Story at Macy’s shop, which is merchandised by color. Floor carpet tiling matches the colors of the merchandise, so for example, pink merchandise is displayed above pink flooring. The setting is animated with a giant interactive Lite-Brite experience produced by LiteZilla and an illuminated rainbow tunnel featuring colorful Tetra Contour technology from Current. Custom fixturing was created by Alu, based in Italy. It’s in white and can be changed out in ways for future Story merchandise themes. The color theme runs through June 26.

Shechtman, reluctant to reveal future themes, did say one possibility would be “home for the holidays.” She said Story at Macy’s will deliver concepts through “unique collaborations, narrative-driven merchandising and dynamic event programming.” Story at Macy’s will not be selling any of its product online, though there’s a dedicated web site, macys.com/Story, with information on the shops and their events.

“Bringing Rachel’s perspective to the table will help create more enriched and engaging in-store experiences and brand activations,” said Jeff Gennette, chairman and chief executive officer of Macy’s Inc. “We are committed to growth in 2018, and this is one important step along the way.”

Shechtman said by joining forces with Macy’s, Story has “a national stage to leverage its learnings and relationships to create impact at scale.”

The freestanding Story store in Chelsea continues to operate. 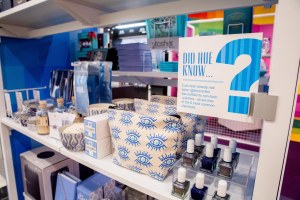 A Story at Macy’s display, in the blue zone of the shop.