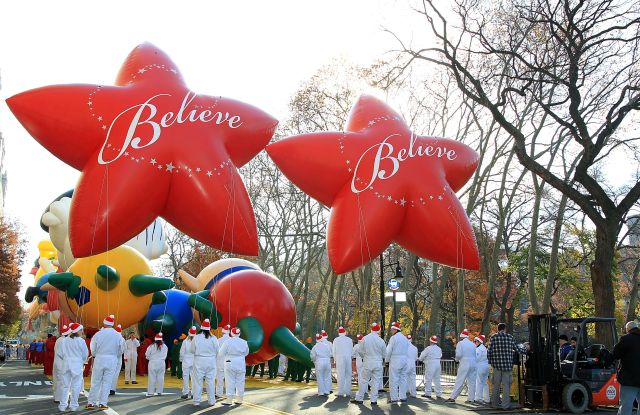 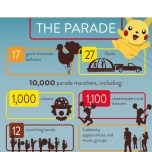 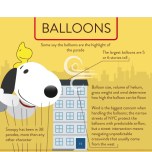 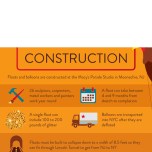 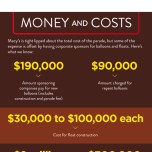 Macy’s annual Thanksgiving Day Parade, which boasts 50 million TV viewers and 3.5 million on-site spectators, is estimated to cost between $10.4 million and $12.3 million, according to Ebates, the online cash-back shopping site.

The 90th annual parade takes place Thanksgiving Day, Nov. 24, at 9 a.m. EST and is considered one of the largest and most watched parades in the world. The New York Police Department said Monday it plans to step up security for the parade after threats made by ISIS.

Among some of the key statistics for the parade that were provided by Ebates and confirmed by Macy’s:

• There are 17 giant character balloons (among them Charlie Brown, Trolls, Pillsbury Doughboy, Spongebob Squarepants, Thomas the Tank Engine and Hello Kitty),  27 floats and 10,000 parade marchers, including 1,000 clowns, 1,100 cheerleaders and dancers and 12 marching bands.

Other interesting facts are that some 700 costumes are designed each year for the parade. A single float can contain 100 to 200 pounds of glitter and floats must be built to collapse down to a width of eight-and-a-half feet to fit through the Lincoln Tunnel on their way from New Jersey to New York. Some 26 sculptors, carpenters, metal workers and painters work year-round. And a float can take anywhere from four to nine months from sketch to completion.

In addition to the numerous floats and balloons, cast performances from such Broadway shows as “Holiday Inn,” “Cats,” “Paramour” and “Waitress,” as well as the Radio City Rockettes, will take place on 34th Street.