In the first year of operating Story, Macy's goal was to "learn, iterate and innovate."

By David Moin
with contributions from Jenny B. Fine
on February 13, 2020

Macy’s is closing 16 of its 36 Story shops following 10 months of testing and learning since launching the format inside its stores, WWD has learned.

Story has been among the most touted elements of the department store’s innovation agenda, along with the rollout of the Backstage in-store and freestanding concept, and Market by Macy’s, a 20,000-square-foot specialty store that debuted in Southlake, Tex., last week with a “curated” offering.

Story was launched at Macy’s Herald Square flagship and 35 branch stores in 15 states in April 2019 after the corporation purchased the business in 2018 from its founder Rachel Shechtman and named her Macy’s brand experience officer.

Story shops inside Macy’s average 1,500 square feet and have customized, flexible fixtures, and, similar to the original Story store, which was at 144 10th Avenue in the Chelsea section of Manhattan, they change their merchandise theme, products and decor every two months or so.

While confirming the closing of certain Story shops, Macy’s stressed that the remaining 20 are not going away. As a Macy’s spokeswoman explained, “Since its launch in early 2019, Story @ Macy’s has been a test and learn incubator for engaging customer experiences, acquiring new customers and offering unique products. As part of this test and learn model, the Story team opened in 36 varied locations — they differed in location, size and placement in store. The goal was to spend the first year understanding customers and the new brand so that we could learn, iterate and innovate.

“Coming up on its one-year anniversary, Story will be maintaining 20 permanent locations, including Herald Square and not continuing with the other 16 locations. Many of the changes were in markets where Story had multiple locations.”

For the inaugural Story at Macy’s, the theme was “Color” and about 400 products from some 70 vendors, primarily small ones, were displayed. While Color got mixed reviews, the second installation “Outdoors” seemed more sophisticated and included partnerships with Dick’s Sporting Goods and Miracle-Gro to carry products Macy’s typically doesn’t sell. The David Stark event design, planning and production company created the setting. 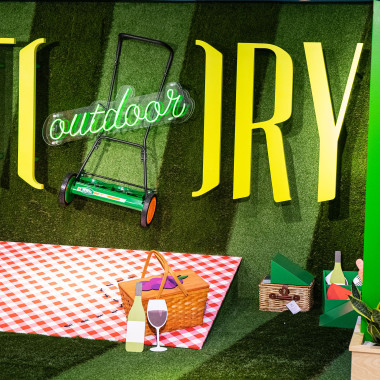 Story’s current theme is “Feel Good” for wellness. There are workout products, “nourishing” snacks, pillows, candles, books, tonics and elixirs among other products. Books and gift-related items have been among the bestsellers at Story.

“Macy’s has learned a great deal about what our customers are looking for from an in-store experience, and Story will remain an important part of Macy’s gifting strategy,” the Macy’s spokeswoman said. “We will be rolling out the next update to our Story strategy in April.”

Story is not an easy concept to execute. There’s pressure to come up with enticing themes six times a year and quickly merchandise to them and create appropriate backdrops for the products. One logistical problem would have been getting vendors — many of them small and having not sold Macy’s before — to provide enough goods required by Macy’s and have them delivered on time.

Story will continue to operate at the Macy’s stores in Herald Square, Manhattan; Union Square, San Francisco; Boca Raton, Florida; Brooklyn, and Short Hills, N.J., as well as 15 other locations around the country.