The avenue is thriving and evolving but remains true to its sophisticated fundamentals. 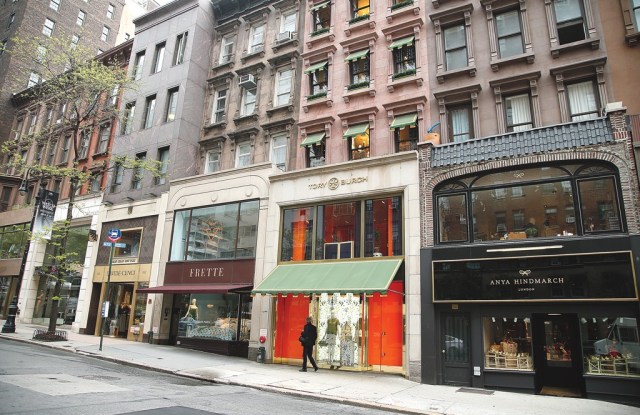 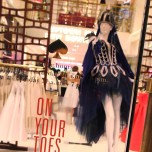 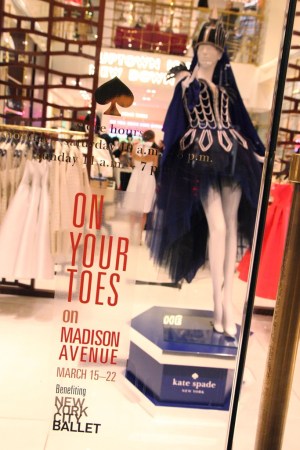 One of Madison Avenue's charitable endeavors.

Younger, trendier and usually less-expensive labels — like Sandro, John Varvatos, Kate Spade and J. Crew — are increasingly cohabiting the streetscape, easing into spaces next to or near luxury designer mainstays like Donna Karan, Hermès and Ralph Lauren. There’s also been a rush of shoe designers landing space, including Schutz and Christian Louboutin, joining Stuart Weitzman and Jimmy Choo, and a growing men’s wear story with Berluti, Suitsupply, Lanvin and Kent & Curwen joining the Hermès men’s shop.

Karan opened DKNY on the avenue in 1999 and her Collection store in 2001. “Madison used to be considered pure luxury,” she added. “For a long time, DKNY was the only more-commercial price point. Now there are more stores of that nature. It’s like a department store unfolding on the street, but Madison is very defined. It has a boutique feeling. It’s easier to shop. It spells fashion. The consumer and fashion are almost intertwined. You feel part of a community.”

“We have no complaints,” said Millard “Mickey” Drexler, the chairman and chief executive officer of J. Crew Group Inc., which has opened a string of stores on upper Madison Avenue over the past few years, including J. Crew Collection and Crewcuts. “Madison Avenue has maintained its integrity, unlike a lot of other once-prominent shopping streets worldwide.”

There’s also Tomas Maier moving in next to Carolina Herrera on 75th Street; Peter Elliot is relocating from 82nd Street to between 76th and 77th Streets; Givenchy is taking 747 Madison by 65th Street; Rena Lange will open at 67th Street; Peter Millar is creating a flagship by 52nd Street and Madison, and Paul Morelli will open his first New York boutique at 895 Madison by 72nd Street.

Roland Mouret’s flagship will be at 952 Madison near 75th Street, in a site formerly held by Bang & Olufsen, which relocated to 58th and Madison with a showroom. Oscar de la Renta doubled its space on the corner of 66th Street, and Montblanc moved to 600 Madison, between 57th and 58th Streets, opening 598 Madison for Fendi.

The former Helmsley Carlton House hotel, between 61st and 62nd Streets and a block north of Barneys, is being converted to the Carlton House condominiums with 36,000 square feet and two levels of retail at its base for about eight high-end brands and retailers. Qela, a luxe collection being launched by the Qatar Luxury Group, will make its U.S. debut this fall at the Carlton House, among others yet to be announced there.

“It’s a magnificent restoration, in a traditional style like Ralph Lauren, with the most beautiful limestone front,” said Joseph Sitt, ceo of Thor Equities, which owns the property. He also said he’s purchased two properties, 1006 Madison between 77th and 78th Streets, and 31 East 61st Street, just off Madison. “Both are going to be fantastic retail town houses,” Sitt said.

It might seem hard to imagine, but Madison Avenue was never part of official city planning. In the 19th century, it was a carriage path with a lot of dirt and a few structures until merchants pushed the city to create a true thoroughfare between Fifth and Park Avenues, and it happened in 1836. Merchants poured in and, a century later, Madison became the center of the advertising industry.

Around World War II, many of its skyscrapers and retail buildings were constructed and, ultimately, Madison became the “Main Street” for the affluent of the Upper East Side. The priciest stores tend to run from 60th and 72nd Streets. Going north, florists, galleries, beauty shops and newer designers like Milly, Calypso St. Barth, Haute Hippie and Zadig & Voltaire predominate, though Carolina Herrera is at 75th Street.

“Madison is still very much the bastion of elegant boutiques, heavily represented by watch and jewelry brands. Sometimes one walks up Madison and is so pleasantly surprised by the small, beautiful shops that seem to pop up out of nowhere,” observed Michele “Mickey” Ateyeh, principal of Cummings Designs LLC. “The Madison Avenue brand image is alive and well,” with more of a European flavor than other neighborhoods in the city. “The fact that French and Italian restaurants and bistros dot the avenue or are just steps off the avenue [like Amaranth, Chat Noir and Cafe Charlotte] adds a literal and figurative flavor to the neighborhood.”

“The demand for space has never been higher,” said Faith Hope Consolo, chairman of The Retail Group of Douglas Elliman Real Estate. “Spaces do not remain vacant on Madison for long — the moment an availability is even hinted, a brand looking to enter, relocate, expand or resize a store here gets to work. A brief dip in rents during the 2009 downturn allowed new entrants to the street including Soigne K, the first U.S. outpost for India’s haute couture shop Kimaya, and new jewelers including Mauboussin, Solange Azagury-Partridge, Breguet, Girard-Perregaux and de Grisogono. Others, including Buccellati, relocated from other luxury streets to join the fun.”

“All the brands want to be on Madison,” said Karen Bellantoni, executive vice president of RKF real estate. “If they’re in SoHo they want a second store on Madison Avenue.” And several brands, she noted, have multiple locations on Madison, including Prada, Ralph Lauren, Michael Kors, Hermès and J. Crew.

“The key to understanding why Madison Avenue can support a mile and a half of luxury brands is to recognize how entwined the district is with the residential community,” said Matthew Bauer, president of the Madison Avenue Business Improvement District. “The new wave of luxury brands that has joined Madison Avenue does so largely because they know their clients live [nearby]…and these clients enjoy shopping locally. These new boutiques are also buying into an entire luxury milieu” of spas, salons, restaurants and hotels.

Despite all of the avenue’s sophistication and style, and the strength of luxury retail sales, there is still a concern. Rents are rising faster than traffic levels or revenue, making it hard for some stores to sustain profit levels and pushing out smaller, often independently owned businesses that have to relocate or simply shut down.

Rents average between $1,300 and $2,000 a square foot from 57th to 72nd Streets, though some smaller spaces that usually turn out to be fine jewelers could command around $3,000, say real estate brokers. Over the past year, the asking rents for Madison between 57th and 72nd Streets have risen by 24 percent, according to a report from the Real Estate Board of New York.

Above 73rd Street, rents run from $650 to $1,000 a square foot, and from 79th to 86th, rents start around $400. Variables affecting rates include ceiling heights, landmark restrictions, a building’s condition or being on a corner. Rents are seen rising 20 percent in 2014.

At night, pedestrian traffic dries up as stores generally don’t stay open late as much as those in Times Square or on Fifth Avenue. There’s little nightlife, unlike SoHo and the Lower East Side, which keep going and going.

“There are certain blocks that for whatever reason, there’s some drop-off in traffic. When it gets warm, you definitely see much more traffic,” said Bellantoni. “Some retailers with higher rents don’t necessarily see the pedestrian footfall they expected, but there are larger transactions helping offset traffic shortfalls. The strongest traffic is around Barneys, and then it picks up again around 74th and 75th Streets because of the Whitney, Ralph Lauren’s stores and Ladurée macarons. The mid-70s are big.”

In the last few years, there’s been an awareness among merchants that they need to work together to generate greater traffic. Efforts are being spearheaded by the BID, which was formed in 1996 through a partnership of property owners, merchants, residents and elected officials, to enhance business and the quality of life. The BID extends from East 57th to East 86th Streets on Madison Avenue and also encompasses the commercial areas of adjacent side streets. The BID’s territory covers more than 300 buildings, more than 500 condominium units and in excess of 800 businesses.

The BID has stepped up its marketing activities, forming Watch Week — four have been held so far — when Asprey, Buccellati, Chanel Fine Jewelry, David Yurman, de Grisogono and Georg Jensen, among other companies, provide previews of their premier timepieces, artisan demonstrations and receptions where watch connoisseurs can mingle with watch executives and creators.

The “On Your Toes on Madison Avenue” event in March, benefiting the NYCB Toe Shoe Fund, had shoppers in the stores mingling with dancers from the New York City Ballet and window displays of costumes from “Swan Lake,” “Jewels,” “Coppelia” and “A Midsummer Night’s Dream.”

The first “Fashion Heritage on Madison Avenue” will be held in October to benefit the FIT Museum and Couture Council. A curated app will  help tell the story of participating stores’ brand heritage with audio and visual enhancements. The special events by the BID, said Bauer, give businesses the opportunity to support philanthropies, and “recognize that engaging a luxury client requires creating programming that’s abundant in breadth and depth, and which creates a call to action to visit a store and spend.”

There is also a branding component, as Bauer said, “that both preserves the special nature of the district that attracted that retailer here in the first place, and which motivates clients to choose our district as the location for their luxury shopping experience.”

“Building a personality for a neighborhood takes time and, while certainly there needs to be planning and vision, it is a more organic process,” explained branding expert and store designer Robin Kramer. “There are many variables — residential, restaurants, retail, city planning, etc. Architecture has a very big influence on the vibe of a neighborhood. North of 57th Street, Madison Avenue has a luxury and European feel due to the size and scale of the buildings and the fact that many of them were originally built as private homes.”

Asked what she feels the Madison Avenue appeal is all about, Kramer, whose Madison Avenue projects include Barneys’ renovations and the Donna Karan Collection store, said the traffic and ambience is less touristy and corporate, yet therein lies the retail challenge. “As the younger contemporary brands move in, I think it would benefit the avenue and the entire Upper East Side to have some more contemporary restaurants to attract that customer.”

NEXT: A Ground Swell of Activity on Madison Avenue >>

Designers and brands are rushing to open shops on Madison Avenue, which has seen a major influx over the past couple of years. Here, from the fashion, jewelry, watches and beauty sectors, several key recent and soon-to-happen additions to the avenue, as well as relocations and store expansions, in the stretch from 57th to 86th Streets, provided by the Madison Avenue BID.

1836: Samuel Ruggles, a real estate promoter, receives permission to plot out a new street between Park and Fifth Avenues, named in honor of President James Madison, who died in June of that year. Madison Avenue was not in the original 1811 Commissioner’s Plan for New York.

1880-1920s: Brownstone row houses begin appearing in the late 1880s; apartment buildings start sprouting in the first decade of the 20th century, and in the Twenties, the first two floors of most residential buildings convert to commercial use.

1966: The avenue shifts to one-way traffic in the beginning of the year. The Whitney Museum of American Art opens on Madison at East 75th Street in September 1966. The Metropolitan Museum of Art will take over the site when the Whitney relocates to the Meatpacking District in 2015.