Madonna working out deal for contemporary women’s collection that would be sold exclusively at Macy’s, according to sources. 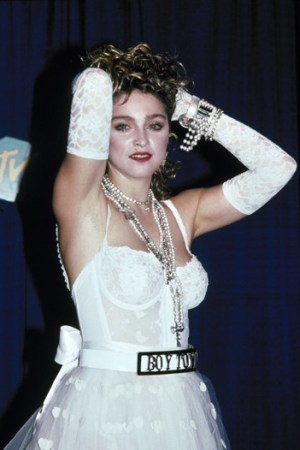 The Bloomingdale’s Battle for Holiday Sales

In the growing love affair between celebrity and fashion, one of the biggest names out there is close to getting into the groove: Madonna.

The pop icon is in talks to launch a contemporary women’s collection with a group of licensees that would be sold exclusively at Macy’s, according to sources. The merchandise would include apparel, accessories, intimates and footwear. Label names under serious consideration for the product lines include Material Girl for the apparel and Truth or Dare for the lingerie and underwear.

This story first appeared in the February 16, 2010 issue of WWD. Subscribe Today.

“Truth or Dare” was the title of a 1991 film, which documented Madonna’s groundbreaking Blonde Ambition worldwide concert tour.

Iconix Brand Group Inc. is involved in the negotiations for the venture, according to sources, and Madonna has made visits to the company’s New York offices. Iconix is a brand management firm, which owns and licenses 21 brands, including Candie’s, Bongo, Rampage, London Fog, Rocawear, Danskin and Badgley Mischka. The brands ring up $10 billion in retail sales in total, according to the company.

An Iconix spokeswoman declined to confirm or deny a potential Madonna deal. “Iconix has no comment on this story,” she said.

However, sources said a deal is close to being signed.

Iconix has experience working with pop superstars, having re-signed Britney Spears last month to a second year representing the Candie’s brand, which is sold exclusively at Kohl’s.

If a Madonna-Iconix deal with Macy’s does come to fruition, it would be the latest in a string of recent tie-ups between celebrities and fashion brands. Sarah Jessica Parker has invested in Halston and been named its chief creative officer and president; Lindsay Lohan is artistic adviser at Ungaro, and Victoria Beckham, Beyoncé Knowles, Jay-Z, Gwen Stefani and Mary-Kate and Ashley Olsen have prominent fashion lines of their own. Knowles also just launched a fragrance of her own, Heat, with Coty Inc., which is expected to generate revenues of more than $100 million worldwide in its first year.

Yet the misses in the celebrity fashion game far outnumber the hits. Jessica Simpson has a successful footwear collection with Camuto Group, but has had troubles in the sportswear category, recently signing a license with Jones Apparel Group Inc. for a jeanswear collection. Jennifer Lopez was never able to build a sustainable business with Sweetface and JLO; Eve repeatedly relaunched her Fetish brand only to have it lapse; Paris and Nicky Hilton’s fashion collections petered out, and lines from the likes of Whitney Port quickly fizzled.

Madonna is Madonna, however, and she remains one of the world’s most recognizable stars. The 51-year-old’s previous forays into the fashion business have been numerous and memorable. She currently appears in the Dolce & Gabbana spring advertising campaign, and has previously appeared in ads for Louis Vuitton, Versace and Gap. Madonna walked the runway topless for Jean-Paul Gaultier in 1992 and has cropped up in the front row of shows on occasion, including Marc Jacobs last season.

In spring 2007, Madonna created a co-branded women’s collection with H&M, under the M by Madonna label. “Madonna has an impressive feel for fashion and trends. She was extraordinarily style conscious, passionate and was involved in even the smallest details of every design,” said Margareta van den Bosch, head of H&M design at that time.

She clearly is eager to branch out from performing, with reports that she may write and direct a film about the romance between Wallis Simpson and Edward, the Prince of Wales, called “W.E.” She also is said to be preparing a worldwide tour for later this year.

The singer is known to demand total creative control over her projects, which is one of the reasons she has yet to launch a fragrance, even though she has tried to do so for more than a decade. Beauty companies have been reluctant to meet her financial demands, while many question whether her appeal remains as strong as it once was.