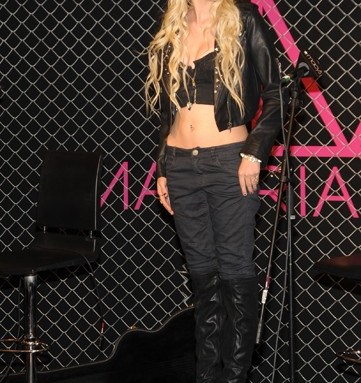 The performer’s enthusiasts were out in force at the Herald Square flagship for the launch of the Material Girl collection by Madonna and her daughter Lourdes, sold exclusively at the store. But while the collection generated lots of buzz at Herald Square, where all the festivities were centered, in other Macy’s outside New York, it was less of an event and drew fewer shoppers.

Nonetheless, the retailer’s executives remain optimistic about the collection, which is being produced by MG Icon, a joint venture of Madonna, her manager, Guy Oseary, and Iconix Brand Group Inc. — which has already paid Madonna and Oseary $20 million for its 50 percent stake, plus earn-outs.

So while Madonna and Lourdes won’t make an appearance for the line until Sept. 22, when they meet sweepstakes winners at the flagship, they no doubt were closely monitoring initial reaction. Teens with blonde streaks in their black hair and dark eye makeup, dressed in black tulle skirts and leggings, waited for the Herald Square flagship to open. A line wound its way from Broadway to West 33rd Street.

The first 200 customers on line at six Macy’s locations received a bandeau top from the collection and a $10 Macy’s gift card. Taylor Momsen, the face of the Material Girl collection in advertising and marketing, performed an acoustic set later in the afternoon on the junior floor at the Herald Square location. Like her muse, Momsen has sparked controversy lately for her provocative style choices and for smoking.

“In my day, we had Madonna,” said a mother attending Momsen’s appearance with her daughter. “We talk about smoking at home and how bad it is for her. No one in our family smokes. I don’t think Taylor influences how my daughter dresses. Everyone makes their own decisions on how to dress.”

“This is beyond anything I’ve seen in my career,” said Terry Lundgren, chairman, president and chief executive officer of Macy’s Inc. “We’ve had 700 million Internet impressions since the collaboration was announced. Word of mouth took off and a grassroots” campaign started. “This has such broad appeal.”

Lundgren declined to discuss sales targets, but said, “We’re in the best shape we’ve ever been in in terms of the back-to-school period.”

The wide appeal of the collection was apparent from the mothers and daughters shopping together. The junior demographic didn’t grow up listening to Madonna’s music at the peak of her career, but has been introduced to it through TV shows such as “Glee,” which devoted an entire episode to the Material Girl’s playlist.

“I’ve been a fan of Madonna since I was three years old,” said 17-year-old Katie Cherney, who traveled from Yeardly, Pa., outside Philadelphia for the event. “I just adore Madonna and I’ve been waiting for this. I saw sketches of the clothes on Facebook.”

The Material Girl also proved to have a far reach. “I’m here because Madonna is opening a shop [at Macy’s],” said Andrea Steyer, who was with her daughter, Ann Katrin. “We came all the way from Germany for this. We read about the launch in German magazines. I like Madonna’s style, energy and I’ve liked her music for 25 years — it’s so incredible.” Yet, she admitted the clothes are “not for me now.”

Material Girl is Macy’s answer to fast-fashion retailers such as H&M and Forever 21, which have been taking market share. “This is our first foray into a fully-integrated brand with footwear, jewelry and accessories,” said Jeff Gennette, chief merchandising officer of Macy’s Inc. “The turn is going to be very fast. There will be constant deliveries, at least weekly. We looked at the vertical competition to make sure we designed everything with value [in mind]. It’s all priced to clear. We plan to sell out.”

Gennette said Macy’s is in the process of “rebranding and relaunching the junior department” and Material Girl is a key component. “By back-to-school 2011, we want to have this vision for the balance of the junior businesses,” he said, noting Jessica Simpson is extending her collection from shoes, handbags and jewelry to ready-to-wear. Macy’s will look at each brand with a goal of developing accessories businesses and exploring opportunities for beauty products, Gennette said.

“I can’t believe how amazingly well priced this is,” said Kim Omae, who works in the fashion industry and described herself as fiftysomething. “I’m tempted to get that tulle skirt. I’d buy it if my kids didn’t care. [Madonna] was my idol.”

Other reactions were similar. Holding an armful of dresses and jeans, Jennifer Sikie, a 16-year-old from Staten Island, said, “The clothes are amazing and the prices are really reasonable.”

At the Macy’s in the Glendale Galleria in Glendale, Calif., about 85 teens began lining up at 7 a.m. to be among the first to get a crack at the collection. A KIIS FM DJ played Madonna songs and asked shoppers Madonna trivia questions in an effort to keep them entertained until the 10 a.m. opening. Customers were given wristbands and $10 Macy’s gift cards.

Isabella Pinedo, 10, of Whittier, Calif., was dressed as Madonna from the “Like a Virgin” video, complete with vintage white lace bustier dress, ropes of pearls, a blonde wig and a veil. “She’s just starting middle school, but she’s been a fan of Madonna since she was five,” said her aunt, Geraldine Sasone.

Cousins Daisy and Stephanie Lopez, 14 and 15, and April Ornelas, 15, of Glendale, were first in line. “We love the style, and, it’s Madonna,” said Ornelas. “Who doesn’t love her?”

When the doors opened, shoppers broke though a pink paper banner with the words “Who’s That Girl,” and made their way to the Material Girl display. The early-morning sales staff had been pumped up to 15 associates from the usual two. Desiree Womack came with her niece, Tamani Dampier, 14. Dampier chose a leopard-print dress while her aunt chose a silk-screened T-shirt. “I’m Madonna’s age, but even I am going to wear her daughter’s line,” said Womack.

“Lourdes has a really good sense of fashion, same as her mom,” said Michelle Ibarra, 14, of Rowland Heights, Calif. “The prices are good, it’s not too expensive.”

Material Girl is initially launching in 200 of Macy’s 800 doors. “We wanted to make this a little bit hard to get,” Lundgren said. “As demand and supply match up, we’ll [expand] distribution.” Surveying the shoppers, some of whom were carrying multiple items, Lundgren said, “We think we’ll sell out early, here.”

But the consumer enthusiasm seen in New York and Glendale was hard to duplicate elsewhere. At Macy’s in the Fashion Centre at Pentagon City in Arlington, Va., the launch hit somewhat of a flat note. Of the handful of shoppers that trickled through the small section dedicated to the brand, none had heard about the launch. One young shopper said that although she was unaware of the collection, she “loved” a floral-print skirt that had caught her eye. Other consumers agreed that the clothes were “really cute,” but none took any items into the fitting rooms. The display consisted of 10 freestanding racks and a small section of wall racks sandwiched between the XOXO and BCX brands.