The company recently opened a boutique here, launched a wovens division and beefed up its New York-based staff to support anticipated growth. 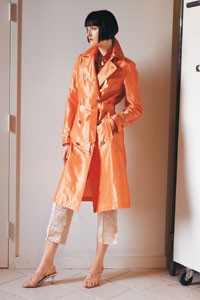 The company recently opened a boutique here, launched a wovens division and beefed up its New York-based staff to support anticipated growth. Known to customers mostly for its wide assortment of knits under the MAG by Magaschoni moniker, the company will also be remerchandised as Magaschoni beginning this fall.

“There is more worldwide brand recognition for the Magaschoni label,” Monica Belag-Forman, president of Magaschoni Apparel Group Inc., said of the decision to streamline the branding effort. “We felt more people recognized us as Magaschoni, so all of our corporate identification has been changed to Magaschoni.”

Underneath the Magaschoni umbrella it will operate the Blue Label for knitwear and casual bottoms and the new Beige Label for wovens, including suits, coats, dresses and separates.

Magaschoni is a division of the M. Magtague Co. Ltd., which had its origins in 1976 when it was launched as a children’s clothing resource for department and specialty stores such as B. Altman, Saks Fifth Avenue and Bonwit Teller. It has also been a cashmere supplier to many Seventh Avenue fashion houses. While the company is Chinese-owned, it has its international design headquarters here.

About a decade ago, the company launched MAG by Magaschoni for its knitwear and continued to use the Magaschoni label for its social occasion business, which it is now incorporating into Beige Label.

“We see an opportunity in wovens between Elie Tahari and Ellen Tracy,” said Belag-Forman.

Beige Label consists of suits and separates and is marked by unexpected details such as paneled collar stitching or pleated linings. For holiday, key looks in Beige Label include a gold metallic trench, priced at $297 wholesale; a tuxedo jacket, priced at $270 wholesale; a jacket with pleated lining, $220; a panne velvet and crinkled chiffon with grosgrain jacket, $175; a crocheted evening lace skirt, $160, and a gold brocade jacket, $182. Overall, Beige Label wholesales between $110 and $300 and targets 200 doors in the first year. Sales projections for Beige Label are $7 million to $10 million, according to Belag-Forman.

The Blue label, meanwhile, offers a variety of knitted tops and casual bottoms that work with the cashmere tops, and includes velvet jeans, cropped jacquard pants, technostretch cotton pants and velvet skirts. It wholesales from $68 to $300.

To better serve the two divisions, the company hired Howard Kriteman as vice president of merchandising. He joins from Anthropologie Direct, where he was vice president. At Magaschoni, Kriteman will also oversee the e-commerce division, which went live earlier this month at magaschoni.com. “The site is more geared toward knits,” Kriteman said. “But the sky is the limit on the Web site. It’s a tremendous opportunity for us as people feel more and more comfortable to shop online.”

In addition, Antigone Sorkin joined as sales director for the Beige Label. Lucia Greco will continue to oversee Blue Label as vice president of sales.

Last February, Magaschoni reentered the Manhattan retail scene with a 2,500-square-foot space at 36 East 60th Street, between Madison and Park Avenues. The company used to operate a SoHo unit on Wooster Street, but its lease expired shortly before the Sept. 11, 2001 attack on the World Trade Center.

“We had always wanted to move locations, and we were looking to open on Madison Avenue, which we thought was a better venue for our product line,” Belag-Forman said.

The uptown store is a joint venture with Larry Kaynes, who owns Shari’s Place in Kings Point, N.Y., and Boca Raton, Fla. It is attached to Vertigo and Friends, which Kaynes has a stake in and which offers contemporary collections such as Vertigo. Magaschoni also operates boutiques on Main Street in East Hampton, N.Y., and on Beauchamp Place in London. Belag-Forman declined to predict the company’s volume for 2005, but said, “I think we can reach $75 million in the next three to five years.”