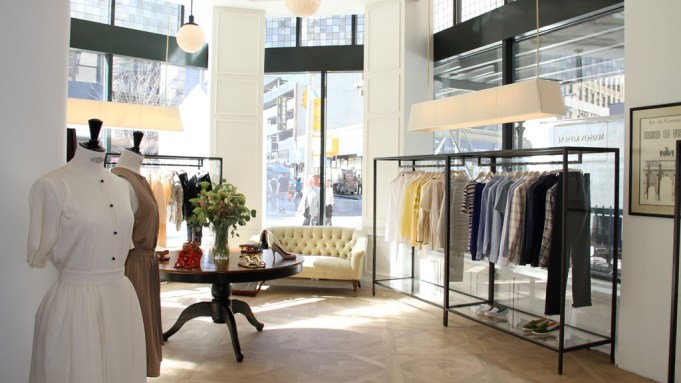 NEW YORK — Maison Kitsune, a French retailer with its own fashion and music labels, today opens its first U.S. outpost, a 1,200-square-foot unit at 1170 Broadway and 28th Street in the NoMad Hotel.

NoMad, or North of Madison Square Park, is a neighborhood here on the brink of change. “Last year, when we said we were opening a store here, people said we were nuts,” said co-owner Gildas Loaëc. “You’re starting to see development on Broadway and there’s no question that others will follow.”

Loaëc said the store is projected to do annual sales of over $1,000 a square foot.

“We weren’t thinking about coming to New York,” said Kuroki. “Our main market is Japan.” Andrew Zobler, chief executive officer of Sydell Group Ltd., which owns the NoMad, approached Loaëc and Kuroki, about bringing Maison Kitsune to New York. “He wanted a French brand that wasn’t as established. It was such an opportunity, we had to jump on it.”

Maison Kitsune, which launched in 2002, operates two stores in Paris. The brand emphasizes luxurious materials — fabric from Italy and France, and Japanese denim — as well as top manufacturers. Loaëc said one of Chanel’s long-time factories produced a Maison Kitsune jacket style for spring.

The men’s and women’s collections consist of separates with simple good taste such as a silk dress with vertical pleats down the front, $1,499; a silk dress in a Liberty fabric, $1,259, and a beige silk and linen dress, $524. For men, Kitsune’s symbol, a fox (Kitsune means “fox” in Japanese) appears discreetly on jackets and sweaters. But it’s not uniformly present. “We’re not so branded,” Loaëc said.

Kitsune collaborates with a range of brands, including Pierre Hardy for shoes, Petite Bateau for T-shirts, Isetan for pajamas, tote bags, scarves and jackets and Corto Moltedo for evening bags.

“It’s all about our lifestyle, what we like and what inspires us,” Kuroki said about his approach to design. “I designed men’s first. It’s casual chic with good quality and the right proportions. For women, it took time for me to find a direction because I’ve only been doing it for a few seasons. I think I found the right volume and proportion.”

Kitsune’s interest in music has developed alongside fashion, but the two don’t always interact. “Ten years ago, the idea was to have a proper music label,” Loaëc said. “We have artists on the radio and at Coachella. The music and clothing lines will live in two separate arenas.”

“We sign artists, we produce CDs and we manage,” Kuroki said. “Music is really our passion. We don’t try to relate it to any moment. Music has a long, long life.”

Prior to forming Maison Kitsune, Loaëc was the art director and manager for the French electro band Daft Punk, while Kuroki, who was born in Tokyo, was an architect before he took up designing.

With sales of $10 million expected in 2012, the company is considering taking on investors as it prepares to open additional stores. “We’re going to grow the company carefully,” Kuroki said.