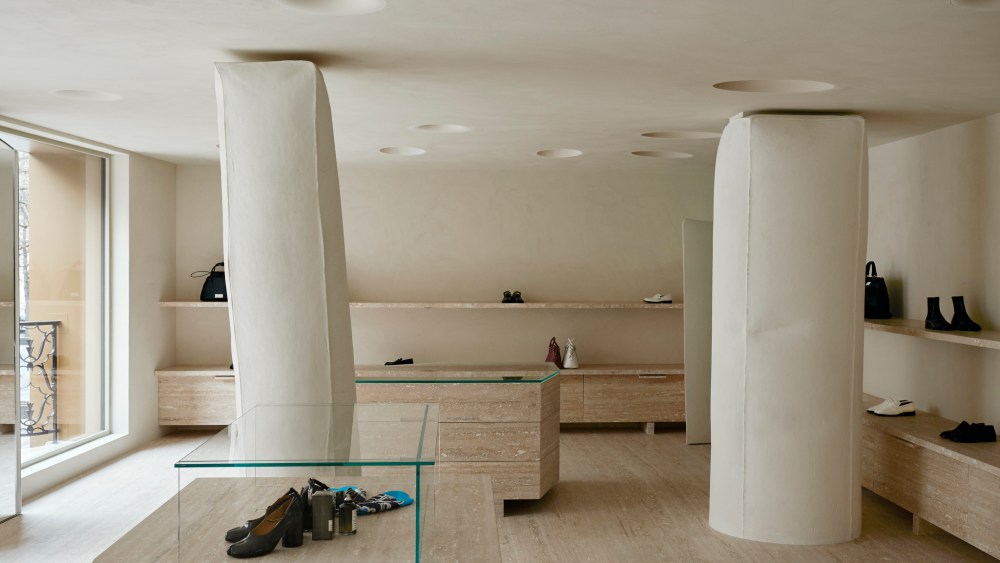 True to its conceptual roots, and the codes brought by John Galliano, the Maison Margiela flagship in Paris is awash in pale colors, luxurious materials and irregular shapes — the retail expression of Galliano’s fetish “décortiqué” and “memory of” techniques.

Wonky plaster columns cast in textile molds and angular mirrors are among the elements of the 2,700-square-foot, two-level boutique, which opened Saturday. The off-kilter minimalism stands in contrast to its more classically luxurious neighbors on the Avenue Montaigne, home to the likes of Dior, Chanel, Valentino, Giorgio Armani, Loewe and Balenciaga.

The high-profile Paris location is one of four new Maison Margiela boutiques done up in the new concept: It actually debuted quietly — and amid intermittent lockdowns — on London’s Bruton Street over the summer, and in the Japanese city of Osaka in late November. A flagship version is slated to open in Shanghai’s Réel mall on Dec. 18.

The flurry of openings underscores Maison Margiela’s stature as one of the fastest-growing labels in Renzo Rosso’s OTB stable — and reflects a strategy to reduce its long dependence on the wholesale channel.

In his first interview since joining the Paris-based house in September, Gianangeli said retail should account for more than two-thirds of the business in three years, up from about 40 percent today.

Once Shanghai is up and running, Maison Margiela will count 22 freestanding stores worldwide, and 35 shops-in-shop in nine countries.

“As of December, we only have two Maison Margiela stores in China, so there is vast room for growth, and we plan several new store openings in China over the course of the next two years,” said Gianangeli, who previously worked at Givenchy, Prada, Bottega Veneta and his family-owned knitwear manufacturer in Perugia, Italy. “Overall, we approach retail growth globally, and I see room for significant expansion. We are planning new openings in the U.S. in Miami and New York in 2021, and we will continue to grow in Europe.”

He also noted new stores are planned for Korea, Japan, Singapore and Thailand.

Alongside the retail rollout, Maison Margiela plans to relaunch its web site in the fall of 2022 as part of its overall omnichannel plan.

By all accounts, the fashion house was overdue for a new store decor.

Its existing concept, with surfaces hand-painted in white, and vintage furniture and fixtures cloaked in white calico, dates back to 2000 when Belgian fashion iconoclast Martin Margiela opened his very first store in Tokyo, tucked into a residential building. The first Paris location made its debut on Rue de Montpensier two years later, selling his iconic Tabi boots, slouchy sweaters and deconstructed tailoring.

“For the new concept, the objective was to maintain the idea of a monochromatic space,” said Gianangeli, calling the retail concept by Dutch architect Anne Holtrop “a pure frame that puts forward the garments and accessories — a space that is reflective of the craftsmanship of the collections.”

What’s more, Galliano has been leading a creative renaissance at the house for almost six years now.

“He has thoroughly established his codes for the house, while respecting the heritage,” Gianangeli said. “It was time to translate the new codes into an architectural frame for the collections and for clients.”

The Margiela boutiques marks Holtrop’s first foray into retail, though he is hardly a stranger to the house.

Martin Margiela, one of the famous Antwerp Six that put the small Belgian city on the international fashion map, was the first designer brand he bought when he was a student at the Academie van Bouwkunst in Amsterdam 25 years ago. “I used to buy my things in Brussels or Paris,” he told WWD. “So when Maison Margiela approached me, there was already a special connection from my memories.”

Holtrop had already designed white, gypsum-cast structures in pillow-like shapes for Galliano’s fall 2018 Artisanal couture show that became the starting point for the stores, which are far more luxurious than the jumbled, do-it-yourself-looking Margiela outposts of yore.

According to Gianangeli, the fact that Holtrop had never worked on a store was a bonus as it “helped to approach things in a non-formulaic, process-oriented way.”

That echoes Galliano’s approach, a deep study of dressmaking techniques, couture volumes and fashion gestures like “dressing in haste.”

Gianangeli said the store concept not only reflects the British designer’s pyramid-like creative approach — with his experimental Artisanal couture at the top, its ideas and themes trickling down to the ready-to-wear collections, signature  items and accessories — but helps the customer experience how these layers of influence unfurl. He noted this is “less obvious to convey in a digital shopping environment, whereas physical retail surroundings elevate it.”

“Translating John’s creative process through architecture has been a fantastic journey,” he continued.

Among Galliano’s recurrent themes are “decortiqué,” “anonymity of the lining” and “the memory of” — all of which Holtrop expressed in the materials and shapes.

“My priority for designing a store is first of all to make a specific spatial condition, before we think of furniture and finishes,” Holtrop explained. “When I started the commission, I collected all publications and books that were made of the period with Martin Margiela, to find out how and to relive the interiors of the original stores and fashion shows.”

The architect elaborated on that 2018 show set to cast freestanding, prow-like walls and dented columns in gypsum, but using textile-lined molds so that the plaster retains the imprint of the fabric. The technique exalts what is usually the humble inside of a wall, a wink to Margiela’s penchant for revealing the inner workings of garments, including the lining.

Holtrop also interpreted Galliano’s décortiqué technique, by which the designer removes blocks of fabric from a garment until it is reduced to its essential frame or skeleton. The architect employed “incomplete rectangular forms based on paper cuts” to build unusual seating, shelves and display cases out of travertine.

“The misfits stresses the incompleteness of the forms,” he said.

Not everything in the store is pale: The ceilings, walls and doors of fitting rooms are painted in a dark green, high-gloss color that comes off almost as black, creating a floating-in-space feeling once the door is closed.

Veteran Margiela devotees will remember that the brand once had a penchant for opening retail stores in offbeat, even hard-to-find locations away from where designer brands usually flock.

“We continue to be committed to destination stores; just not exclusively. We embrace juxtapositions, unpredictability and so does our clientele,” Giananageli said. “The whole ‘uptown versus downtown’ thematic is thankfully less rigid today.”

He also noted that Avenue Montaigne remains an iconic address for couture brands.

“We continue to build and maintain different typologies of clients from experimental to luxury, cross-generational and many, many young one,” he said. “Our diverse clientele approaches the brand in different ways and shops in different locations.”

The new Paris store — which unfurls as a series of small rooms, with views of a courtyard garden in the rear — showcases Maison Margiela’s Co-Ed collection, men’s and women’s ready-to-wear, accessories, shoes, small leather goods, jewelry, eyewear and fragrances.

The new Avenue Montagine location brings to four the number of Maison Margiela boutiques in Paris. The brand now has two on the Rue de Monpensier and another on Rue de Grenelle.

Rosso’s OTB swept in and bought a majority stake in Margiela in 2002, one of a series of acquisitions aimed at building a multibrand Italian group. WWD reported on Dec. 11 that OTB is in discussions to acquire Jil Sander, which would add to a stable that includes Diesel, Marni, Viktor & Rolf and a minority stake in Amiri, plus Staff International and Brave Kid, which develop, produce and distribute brands under license.