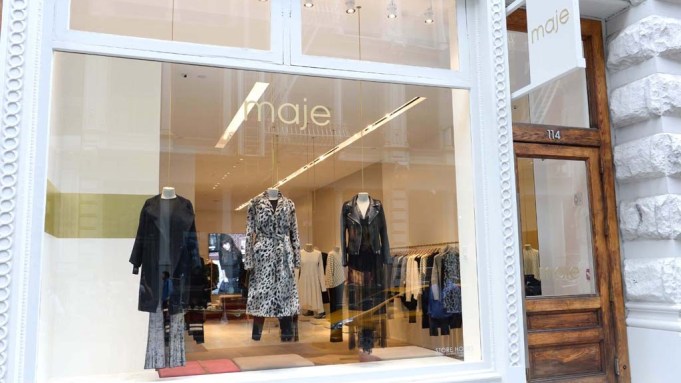 NEW YORK — Maje, which is on the brink of a global expansion push, has unveiled a 2,000-square-foot store at 114 Spring Street in New York’s SoHo. The new prototype represents the brand’s latest evolution and marks its fifth store in Manhattan.

Maje operates a unit at 10 Prince Street, in close proximity to the new Spring Street location. “Prince Street is quite close, but it’s a different customer,” a spokeswoman said. “It attracts locals whereas Spring Street attracts locals and tourists.” Other units are on Madison Avenue, Columbus Avenue and Bleecker Street. “There’s a demand here,” the spokeswoman said.

Clean and light with elevated materials such as marble floors and a marble cash wrap, the prototype concept is called Nomade Moderne, and is meant to evoke a sense of freedom. A “tribe” of mannequins hanging from the ceiling from brass rods is clustered near the entrance. Three mannequins in the window are suspended in the same way.

Capucine Safyurtlu, Maje’s new director of style and image, said the huddle of model forms creates a sense of movement. “The idea of the tribe was perfect because it relates to our DNA,” she said. “It’s really a group. New York City is a key market for the brand and to the growth of our global network.”

A band of gold on the wall is a “concept I see becoming part of the identity of the brand,” Safyurtlu said. “We’re going back to a gold logo on white.”

Dinah Emsalem, who was appointed to head the North American subsidiary of the SMCP Group as chief operating officer of North America, is responsible for the operations and development of the group’s brands, including Maje, Sandro and Claudie Pierlot.

Safyurtlu said the tribe will allow people who don’t know Maje to discover the brand. “All our codes are represented on each mannequin,” she said, “the lace dresses, daywear and eveningwear.”

She added that she’s approaching Maje from the perspective of her previous work in magazines at Numéro and then French Vogue. The store concept is “more edited and more focused,” she said. “The strong identity of Maje is that you can mix everything.”

Only one size of each style hangs on racks, ostensibly to promote conversation between customers and sales associates.

Judith Milgrom, founder and artistic director, is using elevated materials, such as black pony hair as a trim on a jacket, $545. A lambskin moto jacket with braided epaulets is $1,000, a jumper with a black lace overlay dress, $570, a long wool varsity jacket with leather trim, $815, and a black fit-and-flare dress, $430.

“For me, this concept is just the beginning of the story,” Safyurtlu said of the new store. “I hope many shops worldwide will be transformed into this concept.”