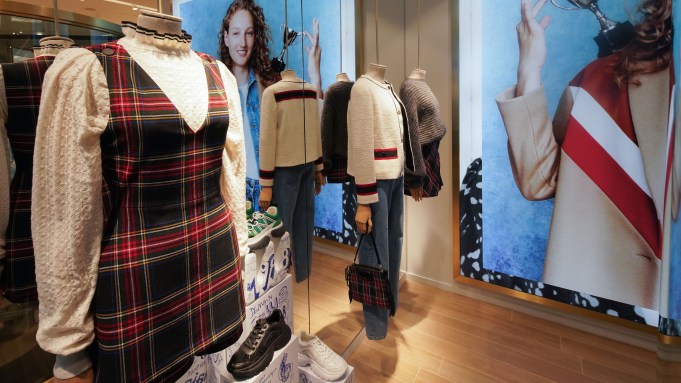 Maje, the 20-year-old French contemporary brand, is making a bigger statement in the U.S. This week, the company, founded by artistic director Judith Milgrom, officially opened a 1,200-square-foot flagship in Rockefeller Center, its fifth unit in Manhattan.

Isabelle Guichot, chief executive officer of Maje, who was visiting New York for the store opening, said in an interview Tuesday that the Rockefeller Center store adds to the company’s network and “is the heart of the city, where everyone meets, from locals to tourists and is part of a landmark place.”

New York is Maje’s number-one market in the U.S. Its other Manhattan stores are on Spring Street, Prince Street, Bleecker Street and Madison Avenue. The company has 52 stores in the U.S., including freestanding corners in Bloomingdale’s, Nordstrom and Saks Fifth Avenue, and 11 points of sale in Canada. Globally, Maje operates almost 500 stores.

Guichot, who was previously ceo of Balenciaga and joined Maje a year ago, said the merchandise is designed to cover all aspects of a woman’s life, from working and traveling to special occasions and weekends. While retail prices range from $100 for a T-shirt up to $1,500 for leather pieces, the sweet spot of the brand is $300, she said. Key categories are dresses, T-shirts, sweatshirts and skirts, with the most important category being dresses, which can contribute up to 30 percent of store sales. A big focus for the store is blazers and suiting, particularly in the plaid and tartan stories, and animal-inspired prints in dresses and tops, said Guichot.

The boutique at 15 West 49th Street features pink onyx marble, Carrera marble, brass fixtures, a gold leaf wall perimeter and felt fabric wall covering. The space also has suspended mannequins for ready-to-wear displays and makes a strong statement in accessories, including shoes, belts and bags, which are displayed on fixtures against the walls.

Its own brick-and-mortar stores, as well as a robust web site, are key vehicles for Maje’s growth.

Guichot said later this year, Maje will open stores in Las Vegas, Houston and Austin, Tex., and Aventura, Fla. Next year, the brand will open a store in San Diego. She said most stores in the retail network are similarly sized and follow a similar format. “We don’t want huge stores. We want a certain intimacy with a client. We have also developed a lot of accessories, which is a natural addition to a look,” she said. All the bags, shoes, jewelry and scarves are manufactured in-house. The company has one licensing agreement, for eyewear, and has no plans for additional categories at this time.

Maje’s aesthetic reflects the personality of Milgrom, who is very Parisian, but was born and raised in Morocco, said Guichot. “She has that feeling and understanding of colors and materials that relate to her youth in Morocco. You feel that influence from being very Parisian, but at the same she’s always mixing influences here and elsewhere, and she’s always traveling a lot,” she said.

Guichot noted that France is the brand’s biggest market, followed by the U.S. and China. Other top markets are Italy and Spain, as well as the United Kingdom. The company produces throughout Europe and Asia. Worldwide sales for Maje were up 16.3 percent in the first half.

As part of developing an intimate relationship with the client, Maje will offer one-on-one styling appointments and same-day delivery. The retailer will have a drop almost every 10 days. “We try and deliver 25 new products every 10 days in stores around the world. Every time you come, you will see a new rack and have a new part of the collection to discover. It’s a constantly moving assortment,” said Guichot. For the most part, she said each store carries the same assortments.

The company has no plans to expand its wholesale operation. At stores such as Bloomingdale’s, Nordstrom and Saks, for example, Maje operates as a concession model, where it staffs its own people. It has partner-retailing in countries such as Australia, Greece, Russia and Korea.

Guichot described her customers as active urban women and their daughters. “They come for a cocktail dress, a wedding dress, a prom dress. They’ll come with their mothers, and their mother will be our client,” said Guichot, noting they’ll even buy things to share.

She said what she brought to the company was a focus on aligning everything they do. “What you see in-store, what you express outside, an alignment in the messaging. We’re working on the strategy of the brand, developing opportunities, and how we can manage consistency and clarity for the clients. When a client comes into the store, she understands what Judith has in mind,” she said.

Another opportunity is strengthening Maje’s digital operation. The company is advertising its Rockefeller Center arrival with a subway takeover for the month, wild postings and a film projection in SoHo and taxi tops.

The company will host a cocktail party Tuesday night at the store cohosted by actress and activist Chloë Grace Moretz. DJ Harley Viera-Newton is providing music and artist Jane Beard is performing a live art installation.