Major League Baseball is getting into the retail business.

The league that represents the 30 professional baseball teams in the U.S. and Canada has taken a large space in Rockefeller Center and will open its first flagship next summer.

The logo for the new MLB store.

The space at 1271 Avenue of the America’s, at 51st Street, will span 17,000 square feet on two floors on the site of the former SNY studios. The store will be operated by Legends, an experiential services agency that has worked with professional sports franchises and entertainment brands including the Chicago Bears, Oklahoma City Thunder and Live Nation.

“We are extremely excited about opening the MLB flagship store next summer,” said Tony Petitti, MLB’s deputy commissioner of business and media. “This new retail location in a busy area of Manhattan gives us another unique way to market our players and teams and help continue to grow the sport. We plan to provide our fans a best-in-class shopping experience and look forward to making this store a reality with our world-class partners at Legends.”

Denis Nolan, senior vice president of global consumer products for MLB, said the league has “always kicked around the idea of an MLB flagship” and when this space opened up, the league took the plunge. “It was all about timing — finding the right space and the right partner.”

He said New York was selected because it’s not only home to two Major League teams, the Mets and the Yankees,  but it also attracts millions of tourists from the U.S. and overseas every year.

“That area attracts tons of foot traffic, especially around the holidays,” he said. The store will be across the street from Radio City Music Hall with its world-famous Christmas show. The space is set back from the street which will allow MLB to create special programming “that coincides with our calendar,” he said. 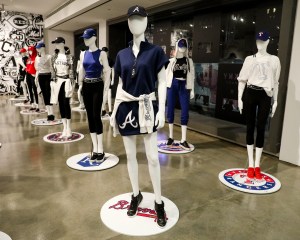 The store will offer a wide assortment of officially licensed products from the league’s full range of licensees. All 30 teams will be represented along with historical product such as the Cooperstown Collection and game-used memorabilia. The store will also offer a selection of New York-centric product with customization options.

“Building an iconic retail footprint in the United States’ most dynamic city, celebrating America’s greatest pastime, is a significant moment for our company,” said Legends president and chief executive officer Shervin Mirhashemi. “Off the strength of our deep experience in merchandise solutions, we are committed to creating an unparalleled shopping experience for baseball fans worldwide. We’re thrilled that Major League Baseball has chosen our team to help launch their state-of-the-art flagship store — we know fans are going to love this new experience.”

Nolan said it’s too early to discuss what special features and experiences the store will offer, but it will provide “an elevated retail experience” that will effectively represent the MLB brand and appeal to domestic and international tourists as well as diehard baseball fans. The National Basketball Association operates a three-story 25,000-square-foot store on Fifth Avenue and 45th Street that offers a number of experiential components in addition to product. And the National Hockey League operates a flagship at 1185 Avenue of the Americas at 47th Street, the NHL Store NYC.

Across the U.S., there are Clubhouse Shops for individual teams, centered around specific franchises and sell product and memorabilia for that one team as well as tickets to games. Those stores are operated by Lids.

Nolan said there are no plans to open other flagships in other cities at this time. MLB has around 700 stand-alone stores and shop-in-shops in Asia that are operated by local partners. The merchandise there is “more fashion-driven,” he said, adding that MLB is a “pretty relevant brand” in those markets. But he expects the MLB flagship to also make a splash at home and allow the league to showcase both fashion and fan-specific product. “It’s going to be really interesting,” he said.