The 10,000-square-foot store is located across from Radio City Music Hall.

NEW YORK — With the coronavirus-impacted post-season now in full swing — and stadiums still shuttered — Major League Baseball is hoping fans will turn out to support their favorite teams at its new flagship in Manhattan.

On Friday, the league will open a 10,000-square-foot, two-level store at 1271 Avenue of the Americas between 50th and 51st Streets, across from Radio City Music Hall.

The store, which is located in the former SNY Studios space, is being operated by Legends, an entertainment-based company that operates retail stores at Yankee Stadium and Angel Stadium as well as other attractions around the world.

The store features the widest assortment of MLB products anywhere in the world. And while Yankees and Mets product is front and center, it offers merchandise from all 30 teams. The mix ranges from the Nike-produced Authentic Collection, which offers replicas of what the players wear, to fan gear, the nostalgia-tinged Cooperstown collection and around 10,000 Authentic and lifestyle caps from New Era. 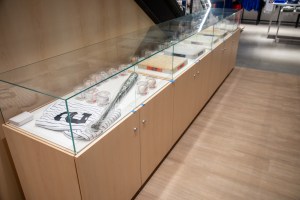 Authentic memorabilia is also sold in the store. 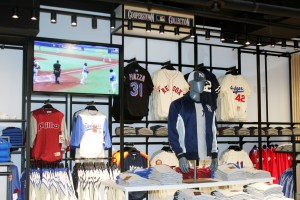 The store sells merchandise for men, women and children. 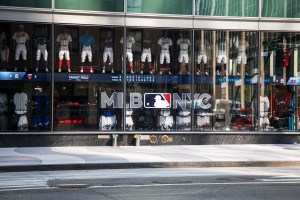 The MLB flagship is located across from Radio City Music Hall. 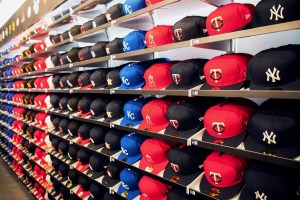 The store features caps from all 30 professional teams.

Inside the front door on the 51st Street side is a display of New York-specific merchandise sporting an MLB NYC logo on hoodies, Ts and hats.

There is a large assortment of Nike jerseys for all teams on the upper level along with men’s wear from licensees including Vineyard Vines — whose dress shirts, vests and outerwear are strong sellers in the Northeast — as well as johnnie-O, Peter Millar and others. Fan gear is also offered here with more trend-skewed colors and styles. And there’s a large assortment of Topps baseball cards on custom-created fixtures.

On the lower level, there are separate women’s and children’s areas with both Nike jerseys, ‘47 Brand pieces, and licensed apparel from DKNY, Peter Millar, Tommy Bahama and Vineyard Vines. There are also accessories from Dooney & Bourke, Alex Woo and Rustic Cuff.

A selection of men’s wear from ’47 Brand is also featured here along with the Cooperstown collection with a heavy dose of jerseys from Hall of Fame players including Tom Seaver. In addition, the lower level houses Mitchell & Ness throwback jerseys as well as an MLB-themed photo booth, where fans can print or upload photos to social media. And there’s a large assortment of novelty items such as license plates, Yeti insulated tumblers, bottle openers, Herschel backpacks, mugs, socks and more for adults and kids.

There is a customization station where fans can personalize MLB replica jerseys and Stance socks with their favorite players’ names or their own. A jersey carousel, which is visible from the street as well as both floors of the store, rotates above the customization area and displays jerseys from each club.

The lower level of the store also features a memorabilia section selling game-used and autographed merchandise from Tokens & Icons. The area includes game-used bases from historic match-ups such as Game 7 of the 2016 World Series and Game 7 of the 2019 World Series; recent All-Star Games; Home Run Derbies, and the World Series. Not surprisingly, there’s a healthy dose of Derek Jeter-autographed items from the 2020 Hall of Fame collection. The former Yankees captain was voted nearly unanimously into the Hall earlier this year.

“With a wide assortment of merchandise and showcasing products from all 30 Clubs, the MLB flagship offers something for all of our fans,” said Noah Garden, MLB’s chief revenue officer. “We expect the MLB flagship to be more than a retail location. Over time, we plan to host MLB player appearances, special events, product unveilings and more as the location establishes itself as a new way for fans to celebrate all things Major League Baseball.”

Garden said that MLB moved its headquarters into the building above the store earlier this year and was able to secure the location for the store as well. Because the store is set back and is in a plaza, the plan is to utilize that outdoor space for events once it’s safe to do so.

“We talked a long time about having a flagship in New York,” he said, adding that the league holds a long-term view of the store. The original plan was to open the unit sometime after the All-Star Game in July so the pandemic only pushed back the opening a few weeks,” Garden said. “We’re mostly on time and excited to open it.”

Garden added that despite the truncated season this year, interest in the sport remains high. “We’ve never had eight playoff games in one day before,” he said. “And there are 16 teams in the playoffs for the first time. Business and retail in general is challenging, but our partners have been great. They know we’re all in this together and there’s no playbook for what’s been going on in the world. But we see signs of life.”

In New York City, traffic is beginning to increase on the streets again and once tourists return and attractions such as Radio City reopen, he’s hopeful the store will thrive. “We want to be part of the revitalization of the city,” he said. “And we’re going to be here a long time.”

Dan Smith, president of hospitality for Legends, agreed. “We’re starting to see signs of people coming back to the city,” he said. And since fans can’t go to stadiums to cheer their teams on during the post-season this year, he expects they’ll hit the store to stock up on gear they can wear to support their favorites. “And that will take us right into holiday.”

Like Garden, he said Legends, too, wants to be “part of the New York comeback story.” And the company is eager to soon utilize both the interior and exterior space to showcase a true “MLB experience” for fans.

That will kick off from Oct. 5 to 8 when the store will showcase the Commissioner’s Trophy, which is given to the winner of the World Series each year, for fan photos. Following its appearance, the trophy will travel to Arlington, Tex., for the 2020 World Series.