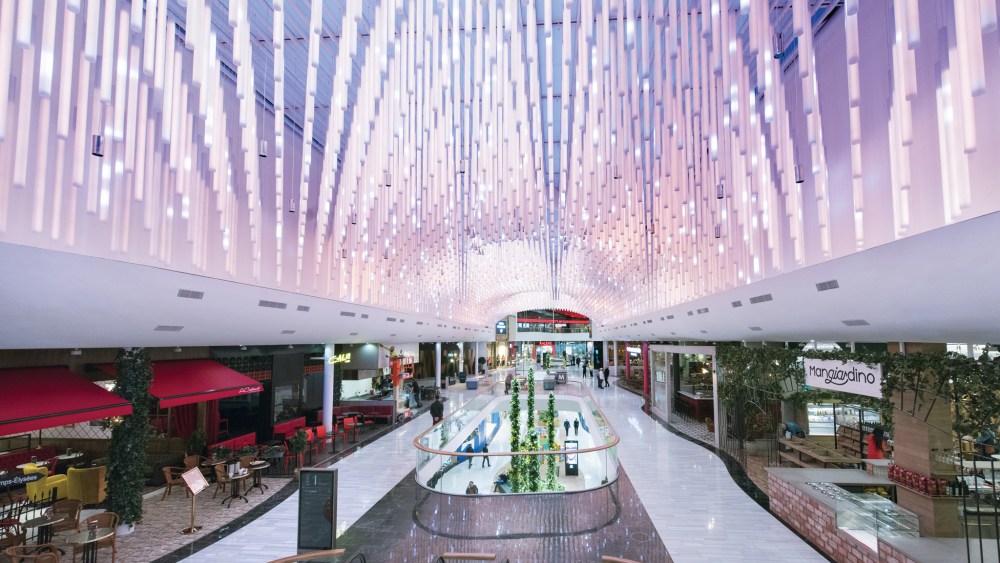 With Mall of Scandinavia, its biggest investment to date in a shopping center, commercial property developer Unibail-Rodamco is laying out its vision of the mall of tomorrow.

Located on the outskirts of Stockholm, the 1.08-million-square-foot shopping center, which opened on Nov. 12, is the largest in Scandinavia and features a host of innovative design features and services, including Click & Services, a dedicated area that provides a crossover between e-commerce and physical shopping.

The project represents an investment of 640 million euros, or $679 million at current exchange, and features 224 retail units. They include Sweden’s first commercial Imax cinema and 22 restaurants, twice the average of other Swedish shopping centers.

Other exclusive features include The Designer Gallery, a concept developed by Unibail-Rodamco’s innovation incubator UR Lab that showcases edgier labels alongside pop-up stores, a lounge and services like a personal shopping team.

“I think this is the first time in many years that we’ve opened a center fully leased. It gives you an idea of the power of the Stockholm market and the attractiveness of the project,” said Olivier Bossard, chief development officer at Unibail-Rodamco.

Stockholm is the fastest-growing city in Europe, with its population expected to expand by 11 percent by 2020, according to a report compiled for the Stockholm Chamber of Commerce by Swedish economist Peter Stein.

Swedish retail trade is expected to grow 4.5 percent in 2015, compared with a 3.4 percent increase in 2014, according to the Swedish Institute of Retail (HUI).

“Totally in the region over the last four years, we have invested a little more than 1 billion euros,” said Lars-Åke Tollemark, managing director Nordic at Unibail-Rodamco. The group’s strategy has been to focus on shopping centers of more than 430,000 square feet and with upwards of 6 million visitors per year.

Unibail-Rodamco expects Mall of Scandinavia to surpass Täby Centrum in terms of visitor numbers three years from now. Close to 1.6 million people live within 30 minutes of the mall, which is located at the intersection of two major highways, with 166,000 cars passing through every day.

In addition, the center is located next to Friends Arena and is surrounded by office buildings that will soon be home to companies including Swedish bank SEB and telecommunications firm TeliaSonera.

Next to the mall is Quality Hotel Friends, a 400-room hotel which — like the shopping center interior — was designed by architect Gert Wingårdh.

Facing the Solna commuter train stop, which links Mall of Scandinavia to Stockholm’s city center in seven minutes, the main entrance to the shopping center is sheltered by a canopy featuring a 13,000-square-foot ceiling mirror embedded with LED lights, reflecting the flow of visitors below.

Stores and restaurants occupy two-and-a-half of Mall of Scandinavia’s seven floors, while four-and-a-half floors are dedicated to parking, with 3,700 indoor spaces.

The retail area was conceived as a single space with multiple levels. A curved, figure-eight pathway is anchored by three nodes inspired by the elements of earth, wind and water.

“This is such a huge mall that you want to have highly recognizable notes or atriums,” Wingårdh explained. “We didn’t want straight lines. We wanted you to feel that you want to touch upon certain storefronts and relax.”

Light, whether natural or artificial, is an important element of the design. The Dining Plaza, for instance, features a spectacular ceiling made of 3,500 glass tubes of different sizes that light up to produce constantly changing effects, some evoking the northern lights.

The biggest store in the mall is a 43,000-square- foot unit belonging to Swedish fast-fashion retailer H&M. The group is also present through its & Other Stories and COS banners.

Other key tenants include the first Nike, JD Sports and Intimissimi stores in the Nordic cou tries; Sweden’s first Disney and Lego stores, and the first Michael Kors, Superdry and American Vintage stores in a Swedish shopping center.

“One of the things missing in Stockholm — even though the retail trade was very good — was really a place for big international brands and cross-border retailers, and also the big local heroes, to express themselves,” said Tollemark. “We have an internal target of a 10 percent rotation rate, meaning that we should bring in a new store every two weeks.”

By contrast, The Designer Gallery is a more intimate space, characterized by lower ceilings and a custom-designed carpet that will be replaced every 12 months, in lieu of the marble floor else- where in the center.

At its center is TDG POP, a pop-up space curated by brand strategist and creative director Maria “Decida” Wahlberg, who has previously worked variously as brand communications manager at Adidas Originals, and stylist and video director for Swedish singer Robyn.

Two units will feature short-term tenants, the first of which are fashion and art brand This Is Sweden and furniture design group Cray Collective. Linking them is a lounge space that can be used for launches. On the opening night of the mall, for instance, Evian showcased its limited-edition bottle designed by Alexander Wang.

In addition, display units in the center of the gallery feature a selection of items handpicked by Wahlberg. For the inauguration, these included clothing by Katharine Hamnett, Marimekko and Swedish designer Nhu Duong; Kartell plastic handbags; Reebok’s Pump Fury sneaker, and Honoré des Prés organic perfumes.

“Definitely I find it interesting being on the edge between commerce and art, and trying to push things. When the customers come here, they don’t know what to expect, but I see it — like, they don’t even know that they want this stuff,” Wahlberg said.

She believes the concept is unique in Sweden, which does not have multibrand stores similar to Dover Street Market or Opening Ceremony. “The Swedish brands we have here haven’t been put together like this before, so there is a synergy effect with them coming together finally,” she noted.

The concept is exclusive to Unibail-Rodamco, which unveiled The Designer Gallery in October at Polygone Riviera, its open-air mall in Cagnes-sur-Mer on the French Riviera.

“It’s kind of a way for us to incorporate, to attract brands, more edgy brands, more trendy brands that would not naturally join a mall concept,” said Bossard, citing the example of Australian beauty brand Aesop, which will open its first store in a European shopping center at Mall of Scandinavia next spring.

The shopping center also features a host of state-of-the-art digital services, including Smart Park, which provides easy access to the parking lot for loyalty card holders by automatically recognizing their license plates and memorizing their parking space, and a Smart Map that notifies visitors of current promotions.

The Mall of Scandinavia app includes a function called Meet My Friends, which allows visitors to share their location; Click & Eat, to preorder and pay online for meals and pick them up on arrival, and Click & Services, to collect parcels, use fitting rooms and if necessary, return products.

“Today I think there is no more the same kind of basic opposition between the e-commerce and the physical retail. Quite the opposite: Both are now working together,” said Bossard.

In terms of the overall concept, he believes the developer is reaping the benefits of its scale.

Unibail-Rodamco has a total European development pipeline of 8.2 billion euros, or $8.8 billion, and 17 million square feet of GLA, including two major leisure and shopping destinations set to open in 2021: Überseequartier in Hamburg, Germany, and Mall of Europe in Brussels.

“We’re attracted by very large-scale projects, because if you want to build attractivity, if you want to build destinations where people can spend two hours, three hours, half a day, you re- ally need to be able to embed all those elements of the experience,” Bossard said. “We see that it’s not only a matter of positioning, of strategy. It pays, because […] we are doing 200 to 300 basis points more than the average sales of the other retail channels.”

The developer is thinking about how to introduce even more leisure concepts to its portfolio, such as the planned Spirouland at Mall of Europe, a theme park based on popular cartoon characters.

“This is something we definitely have to work on. Financially speaking, it’s not always easy. You don’t have that many operators that are serious. You have the issue of labor costs,” he noted.

“The difficulty also is how many people do you attract, really, with those concepts? Is it worth all the effort and the money you pour in?” he asked, noting that cinemas remained reliable traffic drivers, attracting between 500,000 and one million visitors a year.

But Bossard is sure of one thing: “Boring retail is going to die.”