"I think like a kid," said Liza Ball, owner of Infinity, an Upper East Side boutique that has become a fashionable teen haven during Ball's 14-year tenure. 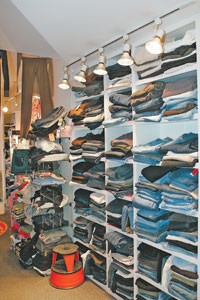 NEW YORK — “I think like a kid,” said Liza Ball, owner of Infinity, an Upper East Side boutique that has become a fashionable teen haven during Ball’s 14-year tenure. “I know what the kids want and I try to get them what they want. A lot of them just want what the older kids are wearing.”

Ball began her Infinity career at the age of 12, in Cedarhurst, N.Y., at the original Infinity store. After working for the retailer for several years, Ball left Long Island and eventually was graduated from George Washington University, but she soon found herself drawn back to the store.

Ball then worked with owner Ilene Morgenroth at the Infinity that opened here in 1986. In 1992, Ball bought the then-600-square-foot space from Morgenroth and three years later expanded the store by 550 square feet when she purchased a neighboring space. Ball’s Infinity is one of seven outlets nationwide, all of which are independently owned but affiliated with the original Cedarhurst location still owned and operated by founder Holly Green.

Ball’s store sits on the corner of 83rd Street and Madison Avenue, one block from the Metropolitan Museum.

“I’d say 20 percent of our customers are from out of town that have met us from going to the Met and staying at the Carlyle [Hotel] or just being right in this area,” Ball said. “We’ve maintained friendships over the years and we ship them stuff, from Michigan to Chicago to California,” she said.

As a result of Ball’s efforts, the store has a neighborhood feel, and customers are referred to by name.

“We’re all friendly and nice,” she said. “We work with people in the neighborhood and people like to come buy birthday presents and some kids like to shop here and pick out things for their birthday.”

The interior feeds a teen’s imagination. The space is stocked from floor to ceiling with colored, patterned and logoed T-shirts and jeans. In the back of the store lies the dress section, a rare find for teens who may not yet have grown into adult sizes but need formal attire for the endless parade of bat and bar mitzvahs and sweet sixteens.

This story first appeared in the January 4, 2007 issue of WWD. Subscribe Today.

“It’s very hard to find dresses for these girls because they want to be grown-up, but the grown-up gowns are too sexy and mature,” Ball explained.

The holiday gift rush treated the store particularly well; bestsellers were stocking-size Webkins (think tech-savvy Beanie Babies), Juicy accessories, tunics and leggings as well as “cruise offerings” of dresses and bikinis. “I feel like it was a great season for us, better than other seasons — people were out spending and going on vacation,” said Ball.

Last year Infinity brought in $2.5 million in sales, and projections stretch to $4 million for the next fiscal year.

Ball’s success can be traced back to the one rule she always abides by: “Whatever is really hot, we have to get it right away.”