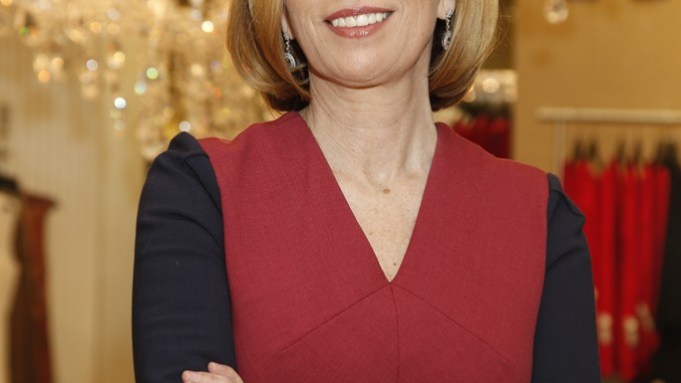 Can Lord & Taylor sell in Atlanta, Miami and Europe?

The Northeast-concentrated department store and its sister Hudson’s Bay division spread through Canada have new agendas stretching the boundaries of where and what both retailers can sell.

That’s the word from Liz Rodbell, the career L&T merchant who on Monday officially stepped up from executive vice president to president of the Hudson’s Bay Co. department store group. The business, estimated at about $4.2 billion in sales for 2013, includes the 49-unit L&T and the 90-unit Hudson’s Bay.

For decades, both have lagged the competition in productivity, not to mention retail theater. Yet over the last several months, management has been stabilized with marketing, creative and administrative chiefs appointed, as well as elevating Rodbell, while strategies for growth and reviving some pizzazz have been unfolding fast. The $7.5 billion parent Hudson’s Bay Co. remains in a transformational period due to its recent Saks Fifth Avenue acquisition, which is separate from the department store group, and intensified efforts to renovate, develop shop formats and brand partnerships inside Hudson’s Bay and L&T and advance the underdeveloped online businesses at those two divisions.

“Digital represents our biggest growth engine,” Rodbell told WWD in her first interview as president, spelling out the blueprint for the future. “The digital marketing spend is being boosted by 50 percent this year,” to represent 30 percent of the overall marketing budget. That should enable L&T and Hudson’s Bay to strengthen consumer loyalty in areas where the retailers operate stores and where they don’t but could sell via the Web.

“L&T has moved to an international model,” Rodbell said. “We can ship to 100 countries,” effective this spring. “Our geographical footprint doesn’t determine the size of the brand. The brand determines the size of the brand.” The company has already begun communicating with consumers in Atlanta, where there are no L&T stores, to test awareness and demand levels.

Rodbell cited a “mobile technology buildup” at both banners, involving outfitting associates with iPads for product search in tests at five doors currently. A “substantial rollout” is seen for 2015. Product searches can also be done at point of sale.

In September, the “Just Ask Us” program was launched to encourage consumers to ask associates to search for products at other locations or on online, when the items they want are not available at the store they’re shopping. The program entails giving associates “technical and behavioral training to drive customer engagement,” Rodbell said.

Furthering the mobile agenda, saving passes (coupons) are being e-mailed so customers can just swipe their mobile devices at the checkout counter to get the discount. L&T and Hudson’s Bay will also double the number of stores that can ship merchandise, from 20 percent of the chains to 40 percent by the summer, as it adds fulfillment staffing to the doors. Further behind the scenes, advanced assortment planning technology is being introduced to sharpen the focus on best-selling items and support the planning organization. It’s a matter of enabling shoppers to get what they want when they want it, and taking the company into deeper omnichannel territory.

Also high on Rodbell’s priority list is boosting merchandise exclusivity and filling product voids. This fall, HBC Sport, a private-label activewear collection that includes yoga pants, sweats and T-shirts, will be introduced to strengthen the existing branded presentation, as will an online program selling big and tall men’s merchandise sourced from leading brands that already sell in stores. Already trickling onto the selling floors is 424 Fifth, another new private label for “modern’’ sportswear. It will be sold at all L&T and Hudson’s Bay stores, and showcased with 3,000-square-foot shops at the L&T flagship on New York’s Fifth Avenue and Hudson’s Bay flagships in Vancouver and Toronto, and with seven “soft” shops at other locations.

In March, the “Oh! Only Here” campaign launches at L&T and Hudson’s Bay to spotlight exclusive products, whether they’re private label or from market brands. There’s an “Essential Dress” component to the campaign that identifies “must-have” dresses from such labels as Calvin Klein.

“Expanding our level of exclusivity is one of our marching orders and part of our vision for growth,” said Rodbell, adding that 23 percent of the assortment across the department store group is exclusive or with a limited distribution.

On the brick-and-mortar front, Lord & Taylor will open more stores in Florida, with a location in the Miami area expected to be revealed soon. The Miami move follows October’s opening in Boca Raton, marking L&T’s return to Florida after pulling out of the state 11 years ago. “Boca Raton is doing really well. We are looking at more locations in Florida,” Rodbell said.

Rodbell said an outlet strategy is also being developed. L&T has just three outlets, and Hudson’s Bay, only one.

She also emphasized the ongoing $40 million renovation of L&T’s Fifth Avenue flagship and other flagships in Canada. A new shoe department on the second floor of the Fifth Avenue flagship will make its debut this fall, expanding the space to 25,000 square feet from 20,000 and providing a more elegant environment. That will be followed by ready-to-wear renovations on levels two, three and four. Renovations at the Queen Street Hudson’s Bay flagship are also ongoing, including installing a 20,000-square-foot Kleinfeld’s bridal salon in May.

Rodbell suggests greater marketing theatrics, though she has an understated manner. She hints at staging fireworks for Canada Day (July 1) and developing Christmas windows for the Queen Street Hudson’s Bay flagship that are as imaginative as L&T’s on Fifth Avenue.

As far as the merchandise matrix, there’s no need for an overhaul and Rodbell is just fine with the positioning of L&T as a better specialty department store for “accessible luxury.” She characterized Hudson’s Bay as a moderate-to-designer department store.

“We are very satisfied with the brand mix but there are always opportunities in select locations to go forward.” She acknowledged localization opportunities, such as enhancing smaller sizes at the Vancouver flagship, where there is a large Asian population, and having regional managers work closer with store teams to understand local nuances and demographics and then “liaise” with the merchant and planning teams to help customize the assortments.

While the merchandise profiles of the two divisions are different, “the fashion direction is very consistent,” Rodbell said. “There is a sharing of ideas and strategy. When you really get into it, it’s quite consistent.”

The group operates with a central organization of 19 senior executives who regularly fly between Toronto and New York to oversee L&T and Hudson’s Bay. The chains have their own buyers, divisional merchandise managers and store organizations, keeping the centralization at the higher rung.

As a regional chain, L&T is not an easy growth proposition, considering the U.S. is overstored. Nor is Hudson’s Bay, which with stores across Canada, faces rapidly increasing competition from American retailers crossing the border. These include Target, as well as Nordstrom, which opens its first Canadian stores beginning next year, and Wal-Mart, which on Tuesday said it’s investing big to accelerate Superstore openings.

“We’ve got to get the sales-per-square-foot up and maximize the whole digital opportunity,” stressed Rodbell, who a few months ago took a vacation in Canada that wasn’t entirely R&R. In her sneakers, she visited stores in Quebec City, Toronto, Montreal and other cities to pick up on the vibe.

“I saw the managers and associates interacting with customers like they were guests in their home,” Rodbell said. “It was something I have experienced many times in our L&T and Hudson’s Bay stores — not an unusual occurrence, but I had taken this trip to visit stores knowing I was coming into my new role as president. I was there for inspiration and in that moment it just clicked — everything I do has to be about that interaction with the customer. Everything. Customer centricity is really my vision for the future of Lord & Taylor and Hudson’s Bay. The question is, how do we build that up?”