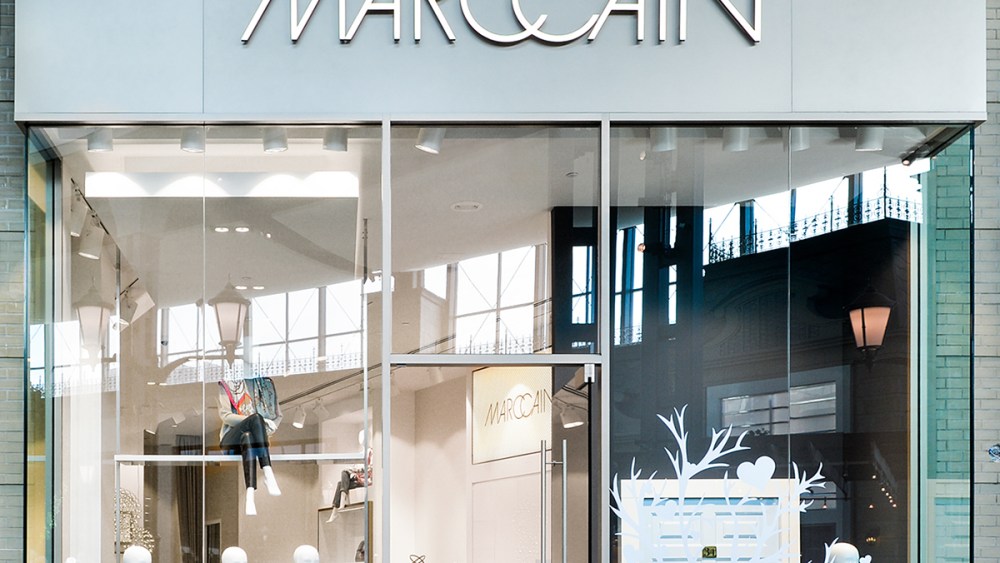 BODELSHAUSEN, Germany — In what is practically its last frontier, Marc Cain is getting set to open the brand’s first store in the U.S. this spring.

With a global retail reach that spans 210 owned stores in 34 countries, 292 shops-in-shop, 387 franchised units as well as selling to 1,087 specialty stores in 61 nations, the German premium women’s wear brand will makes its American own-retail debut in the Westfield Mall in Paramus, N.J., in March. Further stores in malls in White Plains, N.Y., and King of Prussia, Pa., are to follow in May. The stores will all be about 2,150 square feet in size.

The American retail expansion mirrors the company’s recent foray into Canada. Marc Cain founded a full subsidiary with offices and showroom in Montreal in 2014. Under new Canadian chief executive officer Stephen Belfer, who came on board in 2015, the company took over the brand’s wholesale distribution, which had been handled by an import partner for more than three decades. Within a year, five Marc Cain stores, similar in size to the new American doors, opened in malls in Montreal, Quebec City, Calgary and Toronto (two doors) within a year, with stores in Ottawa, Vancouver and Edmonton in the pipeline for 2017.

Belfer also will oversee the company’s American business, which will be fulfilled from Canada. Even more than in Canada, where Marc Cain bid adieu to 30 percent of its wholesale clients, the brand is completely stepping away from its existing 50 wholesale customers in the U.S., arguing the collection image wasn’t supported by piecemeal orders, nor the end results worth continuing.

“We sell fashion, not solid stretch pants like an importer,” declared Norbert Lock, managing director for wholesale and retail. While he acknowledged that taken all together, the 50 doors generated “a nice turnover, in the end, the only one earning was the importer.”

Unlike many of its struggling premium market competitors in Germany, Marc Cain has not only been steadily increasing its sales volume over the last 15 years, but has a profit to show for it. In 2015, sales reached 261 million euros, or $289.6 million, with profit after taxes of 18 million euros, or $20 million.

Dollar figures are converted at an average exchange rate for the period to which they refer.

Founded in Italy in 1973 by Helmut Schlotterer, who is chairman of the management board, the company’s global headquarters are located in the small town of Bodelshausen, about an hour’s drive from Stuttgart. Fabrics, yarn and jerseys are Italian in origin, but then knit, washed, printed and finished in the gleaming white Bodelhausen premises, where the most modern flatbed and circular knitting machines are in operation 24 hours a day in the firm’s surgically pristine knitting center.

Indeed, patterned jacquard knits were the label’s first claim to fame, with animal motifs a further brand signature. The label next scored with its expertise in coordinates, but quickly reacted to the growing demand for a more item-driven fashion assortment.

Marc Cain recently came out on top of a German market survey of “modern premium women’s wear brands,” placing first in five out of six categories: Brand attractiveness, price for value, sales performance, delivery performance and ability to reorder. On the fashion scale from edgy to basic, Marc Cain stood squarely in the middle, a position it openly embraces as an “on trend” versus trend-setting collection.

As Schlotterer summed it up, “We orient ourselves on what the really big players in the international fashion business [are doing]. The art is finding the right translation of the trends, with our signature and for our clients. It’s not that we’re making fashion that the world has never seen before — it’s a constant conversion in particular waves of color and silhouette,” further marked by the label’s well-known love of embellishment and detail.

The Marc Cain line consists of about 1,000 pieces. In the U.S, the collection will retail for between $129 and $749, the company said. The brand encompasses Marc Cain Collections, the core label; Marc Cain Sports with casual and leisurewear; Marc Cain Essentials featuring in-demand classics: Marc Cain Additions, a changing selection of 50, single, up-to-the-minute trend pieces, and Marc Cain Bags & Shoes, which in its third season is now much more fashion-driven.

With Bags & Shoes, “we made the mistake in the beginning of being too basic, too little Marc Cain,” Lock remarked. With the exception of Essentials, which is conceived to address the needs for basics, Lock said, “We have conscientiously removed well-maintained basics or three-year bestsellers out of the collection(s), even if the customer still wants them. You can only fuel [consumer] demand through color and desire.”

Ninety percent of the range is manufactured in Europe, all development including pattern-making centered in Bodelshausen. The expansive and shining white headquarters also houses a fabric printing center; finishing center for processes including conveyor belt steaming, all manner of washing and drying, roughing or chemical cleaning, a test laboratory for materials and accessories, and the design center. One of the newest developments is Marc Cain’s “100 percent Made in Germany” products using 3D knitting techniques for sweaters, skirts and even jackets and coats, all produced in Bodelshausen.

Founder Schlotterer is an admitted high-tech and IT freak. “It’s in my nature,” he said, which has led the firm to develop its own software for omnichannel merchandise management and delivery processes from web to store or store to web. The company was one of the first to launch interactive store windows, and continues to experiment and develop virtual production techniques. For example, rather than rely on sample prototypes, patterns are fed into the computer system, which then uses avatars to virtually evaluate the garment’s sizing, fit and balance. “This will speed up the development process,” he remarked.

When it comes to developing business in new markets, however, Marc Cain is prepared to go slow. “Our biggest problem on the U.S. side was to find a partner who understood our mentality. We have time,  and are looking for solid, continuous growth, while most want 100 percent results next year,” Schlotterer stated.

On the other hand, he suggested classic family-owned stores in the U.S. are “30 years behind Germany. There’s too much merchandise in the stores, and no profile. We deliver every two weeks and they still want one [seasonal] delivery. It’s a traditional business.

“We have always been in markets where it’s not easy,” Schlotterer went on. “China, Russia and the U.K. all have their own rules, and it took years, but when they finally learned our system, they were satisfied.

“As a newcomer, it’s hard to say you must do things so and so, but fashion functions the same the world over,” he concluded. “There are three standards: old, very old, and new, and we’re constantly new.”