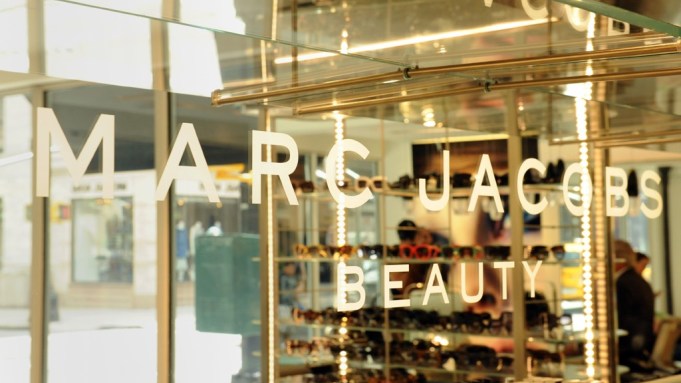 Today, Marc Jacobs is making a major statement about beauty: He’s opening his first store dedicated solely to the category.

The space was once used by Jacobs as an accessories store, but Robert Duffy, president of Marc Jacobs International and the designer’s longtime business partner, noted that Jacobs felt strongly about doing a makeup store because the category is one that Jacobs is “extremely passionate” about. It joins the designer’s Marc Jacobs, Marc by Marc Jacobs, Bookmarc and Little Marc stores on Bleecker. “Bleecker Street is my laboratory,” Duffy said with a smile; retail is his baby.

The space was designed by Jaklitsch/Gardner Architects. “I wanted [the store] to look like a jewel box, so the back is mirrored, ” said Duffy. Sephora’s custom-designed Marc Jacobs gondolas are fit into a vitrinelike space at the back of the store, with rounded glass pieces on either side lending an Art Deco air. Above the gondola is a mirror emblazoned with the Marc Jacobs Beauty logo.

Jaklitsch/Gardner Architects created the heavy black granite table, which is the store’s centerpiece and where makeup artists — who have all been trained at Sephora University, the retailer’s educational program — will work on clients. Hanging over that table is a custom black and white chandelier created by Kacper Dolatowski. “I wanted it to feel a little more fragile in here,” said Duffy. “I didn’t want it to be heavy, even though the table weighs 20 tons.”

Off to the left, Jacobs’ fragrances are presented on a wall display, with a Guy Lefevre-designed vintage table below with an assortment of makeup bags made of fabrics from Jacobs’ fall ready-to-wear collection. A large close-up of a model’s face fills another part of that wall, and Duffy noted that eventually more product displays could replace it. To the right of the makeup is a large vitrine with Marc Jacobs sunglasses. Two walls are windowed most of the way around, with abundant natural light pouring in. Duffy noted that the color collection and custom-designed fixtures will open in 11 additional Marc Jacobs locations today in Bal Harbour, Fla.; Boston; Chicago; Las Vegas; Los Angeles; New York; Provincetown, Mass.; San Francisco, and Savannah, Ga.

There are currently about 300 Marc Jacobs stores globally, and Duffy noted that the company is embarking on a major U.S. expansion plan in 2014. One of the first will be a “very large” Fifth Avenue flagship for Marc by Marc Jacobs, Duffy said, although he declined to give the exact address. Next will be a large Collection store on Madison Avenue. “We’ve never had a flagship store in New York City,” said Duffy. “I’ve always opened smaller stores, like on Mercer Street and Bleecker Street. Now, LVMH is determined to help us achieve this dream.” Leases are being negotiated in many cities but following New York, Duffy hints that Washington, D.C., Southern California, Dallas and Miami will be near the top of the list.

While Duffy and Sephora declined to discuss sales projections, industry sources estimated that Jacobs’ color collection could do $15 million at retail from August through December and $20 million at retail in calendar year 2014. The makeup line is expected to launch in Europe in 2014 as well, said Duffy, with the Middle East and Asia to follow.

Could more Marc Jacobs Beauty stores pop up? Duffy doesn’t rule it out. “It depends on how it does,” he said candidly. “When we launched Bookmarc, I thought it would be the only one, and then we opened one in L.A. and in Paris and in London. And we’re about to open one in Tokyo. At practically every store I’ve underestimated the amount of people who will come.” He also hinted other licensed categories could one day come, including fine jewelry and furniture.