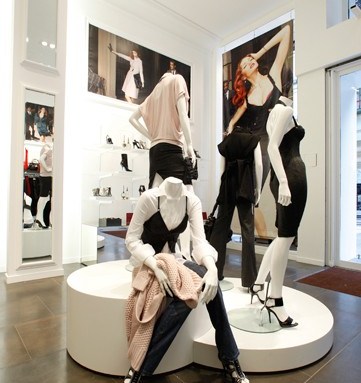 NEW YORK — “Marciano,” shouts the brown script logo from high above 514 Broadway in SoHo, made even more prominent by the gleaming white facade. To the right of the nameplate is an oversize window with a larger-than-life poster of a buxom redhead in a tight black skirt and camisole top, a blond stole draped over her arm and a metallic evening bag in her hand.

The first Marciano flagship in Manhattan covers 6,000 square feet over two levels. Paul Marciano, chief executive officer and co-chairman of Guess, is bullish about his namesake retail concept: The company plans to open 70 Marciano units in the next three years, with 10 slated for 2009.

There are 44 full-price Marciano stores and six outlets in the U.S. and Canada. A flagship in Honolulu will bow this year and units are planned for locations such as Cherry Hill, N.J., and Montreal in 2009. “We have 50 top locations” picked out, said Allen Kiefer, director of retail development. “It’s about a 50-50 split between mall and street locations.”

The flagship is organized by color or suiting group, with coordinating separates and items in the same color family displayed together. “We want customers to look in one section and find everything [they need] there — clothing from day to night — and really wardrobe themselves,” said Cynthia Kaschak, Marciano’s visual merchandise director. “We ship weekly. We get merchandise in small quantities. It keeps the customer excited and hyped up.”

Suiting from the new Ealing group ($228 for a jacket and $138 for pants) can be found on the first floor, along with tops, such as the satin Isabella ($98), evening dresses like the Stardust with bubble hem ($148), jeans ($148), shoes, jewelry and a smattering of handbags.

The floor is divided into several areas. A room off the main aisle displays the largest selection of footwear of any Marciano store and is anchored by a giant tufted leopard-print pouf. New fall styles include the Cason, a multicolored stiletto-heeled pump ($250). “Paul feels shoes are a very strong growth opportunity,” said Kaschak. “We just started licensing shoes out last year. Handbags are also a big opportunity.”

Unapologetically sexy, yet not quite as overt as big sister Guess, Marciano’s creations hit numerous come-hither notes with leopard print on shoes and blouses and peeking out of corset dresses; subtle suggestions of bondage via lace-up garments, and cutout tops with names like Jezabel. Corset dresses are, in fact, a bestseller, offered in several iterations, including a V-neck version with ruching at the bust and boning at the waist and another number in a shimmering icy-pink fabric with shirring at the sides that creates “an hour-glass illusion for the wearer.”

Posing in the window are life-size mannequins, appropriately called Window Mannequins, inspired by runway models and designed to look lifelike. A trio of the figures are displayed against the back wall, mounted on beveled mirror blocks. The headless version, also used in the store, has a lanky, model physique. “They wear a size 2, while the regular mannequins wear a size 4,” said Kaschak.

David Chiovetti, vice president of stores, retail and Marciano, said the company was looking to capitalize on traffic and tourism on Broadway. “Our Guess store across the street is doing phenomenal,” he said. “We carried Marciano product there until the flagship opened, and it was one of our best performing stores that carried the product. There is plenty of room for expansion of both the Guess and Marciano brands in New York, not too mention Guess accessory stores.”

The brand’s target customer is 25 to 40-plus years old and knows “that you can be sexy at any age,” said Mary Jimenez, vice president general merchandise manager for Marciano.

The main floor is all sleek and shiny surfaces, with mirrors covering the back wall. A dressing room parlor is painted a glossy white and outfitted with Louis XV chairs covered in a lustrous white material. Limited edition flowy bustier dresses in mini ($198) and maxi lengths ($233) hang from a rack giving off a Sixties vibe.

The lower level of the flagship is more subdued than the first floor. A wet bar and Art Deco-inspired drink cart serves cappuccino and soft drinks. Six dressing rooms are located through a large anteroom decorated with metallic Empire chairs with hot pink piping, a white round Art Deco sectional, zebra rug and Biba-inspired mirrors with peacock features. “We’ve lowered the light levels and made it warmer to make it more pleasing and feminine,” Kaschak said.