As she settles in, McKee said she will work to “transform” the luxury retailer through a “complete upgrade” of its culture and vendor mix. 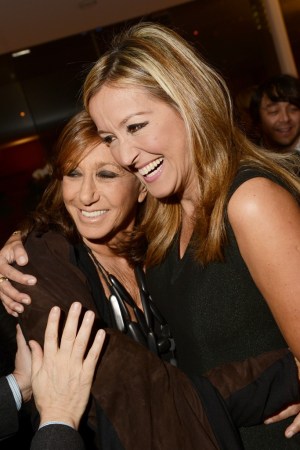 Marigay McKee may have been at Saks Fifth Avenue for only three weeks, but her game plan is already solidly mapped out.

This story first appeared in the January 29, 2014 issue of WWD. Subscribe Today.

As she settles in, McKee said she will work to “transform” the luxury retailer through a “complete upgrade” of its culture and vendor mix and work to significantly enhance the customer experience.

McKee, Saks’ new president, was feted Monday night at a cocktail party hosted by Diane von Furstenberg at her studio and offices in Manhattan’s Meatpacking District. Von Furstenberg was wearing her hat as president of the Council of Fashion Designers of America at the event, which drew dozens of designers to welcome McKee to Saks and New York. McKee was formerly with Harrods in London.

“I will use the word evolutionary, because if I say revolutionary it will scare people,” McKee told the gathering with a laugh.

Calling the retailer “iconic,” she said she is “on a mission to transform the brand that is Saks Fifth Avenue.” She will do that not by copying other retailers, but by presenting “wild and wonderful things that will make Saks stunning.”

Saks will spend $1 billion over five years remodeling the chain.

Reaching her goal will require a multipronged approach, she continued. “Fifty percent has to be culture, and 50 percent will be product,” she said, adding that the plan is to “really expand the brand matrix.” She said Saks can’t just buy “for the customer we have today,” but instead must ferret out merchandise “for the customer we will have tomorrow.”

Other goals include developing the store’s personal shopping department to create a “concierge aspect” for the customer.

McKee ended her comments with an expression she said is commonplace in the U.K. “We have to render living creatures breathless,” she said. “If we do that, we will be successful.”

“I just love her,” gushed Donna Karan, giving McKee a hug at the event. “She’s so full of life and love and creativity. She’s in love with people and people love her. She will bring a new energy that this city desperately needs.”

Von Furstenberg called McKee “bold. We need bold and we like bold.”

Among the CFDA members who stopped by for a hug or a handshake were Carolina Herrera; Georgina Chapman, accompanied by her husband, Harvey Weinstein; John Varvatos; Rebecca Minkoff; Andrew Rosen; Creatures of the Wind’s Shane Gabier and Christopher Peters, and Stacey Bendet of Alice + Olivia.

McKee said that although she’s only lived in New York for less than a month, “It’s very different from London, but I feel like I’ve been a New Yorker all my life. I have my favorite haunts, and it’s all good fun.”