Marimekko for Target Blows Into The High Line

Marimekko for Target's activation on Manhattan's High Line bowed on Friday amid chill winds to a smaller, but appreciative audience. 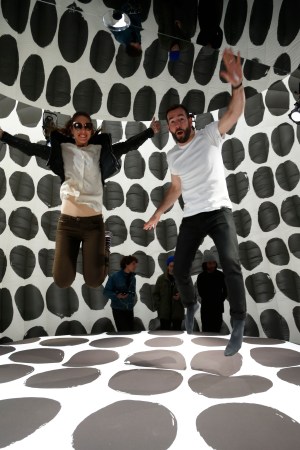 NEW YORK — With cold air whipping off the Hudson River on Friday, turning the High Line into a particularly scenic wind tunnel, it was hard to stay focused on the Marimekko for Target activations taking place in the park. Those who came out to play in the cold, however, were rewarded with interactive, multisensory experiences wrapped up in the Helsinki-based Marimekko’s famed patterns.

Target’s partnership with Marimekko, launching on April 17 in stores and online, celebrates the endless sun of Finnish summers.

Based on recent visitation statistics from Target’s partners at the High Line and the weather forecast for the weekend, the retailer anticipated approximately 70,000 visitors through Monday evening when the event ends.

A black-and-white dot-covered pouf was a high-tech bounce-house for adults, who were asked to remove their shoes before jumping on the huge memory foam mattress. Surrounded by the Koppelo pattern, guests could snap their image in the mirror hanging from the ceiling for the sake of social media posterity.

Another experience involved standing on a large soundboard and dancing. The dancing activated the music. The more people danced, the richer the sound became, until it could be heard throughout the park. Several participants on Friday were break dancing for the audience as others busted unique moves for observers.

“It was a pleasant surprise,” said Kristin Harris, who showed up with her two young sons in tow. “[Marimekko] is not really my style, but I like it. I wouldn’t want to own it, though. It’s too modern for me,” she added, while the boys engaged with some square Marimekko-covered fabric stools by sitting down and standing up multiple times on each one.

Visitors on the opening day of the four-day event were bundled in parkas and hats. Not even the happy red strawberries printed on a royal blue background lining the inside of the retail area could make holding swimwear with gloved hands seem any less odd.

“There was a pop-up sign downstairs by the Whitney Museum,” said Corinne Hill. “I didn’t know Marimekko, but I love it. This is for my kids. I love the design, it’s very cute.” Hill said she was buying bathing suits and tops for her 11-year-old triplets.

“I was at the Whitney and I saw the sign,” said Katie King. “I know Marimekko well. I think it’s great they’re putting it together with Target. It’s brilliant. I’m going back home to Sydney. It’s our winter, but it’s 33 degrees Celsius.”

High Line product offering is a small selection of Marimekko for Target’s more than 200 different items, spanning categories such as swimwear and loungewear for women and girls, outdoor decor, games and entertaining pieces. Most are priced under $50. According to Target, top-selling items from the collection on Friday included beach towels, kites, plates and napkins.