Target is kicking off its partnership with Marimekko with an immersive sensory installation that shows off the fabled prints, at New York City's High Line. 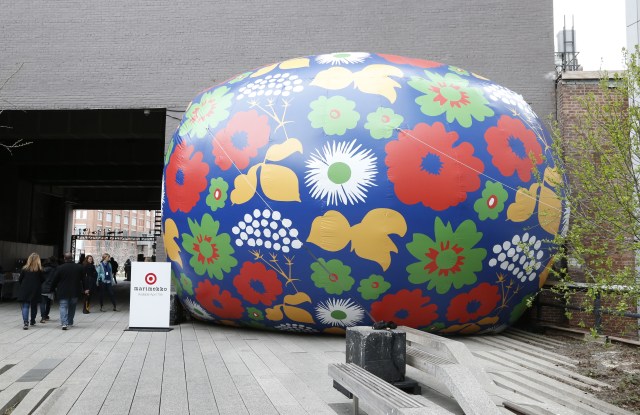 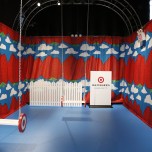 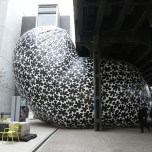 NEW YORK — Target’s partnership with Marimekko celebrates the Finnish summer, when families, eager to spend time outdoors together after months of darkness, cook, eat and play under an endless sun.

To raise the collection’s profile prior to its April 17 launch at all Target stores and on Target.com, the retailer engineered a takeover of the High Line with outdoor “activations” at three different spots.

The only problem: New York’s nonspring, which brought chilly temperatures and rain on Thursday evening, threatening to put a damper on the event.

Rain or shine, Marimekko for Target at the High Line opens with a burst of color to the public today and will operate from 10 a.m. to 8 p.m. daily through Monday.

The interactive, multisensory experiences are all about fun, wrapped up in the Helsinki design house’s fabled patterns.

Two of the larger-than-life structures look like bulbous dwellings dropped on the High Line by a race of design-savvy aliens. Inside Kukkatori Swing, the name of a Marimekko pattern, are six swings replete with slow-motion video for social sharing. “No matter how old you are, the swing takes you back,” said Todd Waterbury, chief creative officer of Target.

Koppelo Pouf is an asymmetric world covered in black and white dots. Guests lie on large memory foam forms beneath a mirrored ceiling. Surrounded by the Koppelo pattern, they snap their image in the mirrors hanging from the ceiling.

The third activation, called Appelsiini Soundboard after the circular print that covers a section of the High Line, invites pedestrians to stand on a large soundboard and dance. The dancing activates music. The more people dance, the richer the sound becomes, until it can be heard throughout the park.

Immersion in multisensory experiences isn’t all that’s happening at the High Line. A selection from the more than 200 items spanning categories such as swimwear and loungewear for women and girls, outdoor decor, games and entertaining pieces will be sold at two locations along the walkway. Most items are under $50.

Marimekko, which was founded after World War II by Armi Ratia, to bring color and cheer back to her country, has a storied history.

The brand was popular in the Sixties; Jacqueline Kennedy, wearing dress in one of its prints, was on the cover of Sports Illustrated in 1960. The company has experienced a resurgence in recent years, discovered by a younger generation of women such as Sarah Jessica Parker. Marimekko has been developing its ready-to-wear collection with a new creative director, Anna Teurnell.

“This is one of the larger-scale activations we’ve done,” said Waterbury of the High Line, noting that Target brand ambassadors will be stationed at each spot to keep things moving. “We’ll have park rangers who are very familiar with the space and how to navigate traffic.”

Target is trying to be sensitive to consumers who tried unsuccessfully to purchase items from one of the retailer’s past hookups. The retailer was faced with overwhelming demand for its Missoni collection in 2011 and the Web site buckled under the pressure. When the Lilly Pulitzer for Target collection bowed a year ago, there were reports that its Web site had crashed, but Target said it was simply regulating traffic to the site.

“The collaborations generate a lot of buzz and excitement,” Waterbury said. “We’ll monitor the foot traffic. Every day we’ll replenish, so there will be new products every day. We’re excited by the fact that it’s one of the first times to shop a collaboration early. It is a limited assortment of products. We never want guests to be disappointed.”

Shoppers at the High Line will be allowed to purchase 10 items per transaction. Online, consumers can buy five items per person, per style and per size.

“The collaboration pushed us internally,” said Tiina Alahuhta-Kasko, the president of Marimekko, whose blond hair and open fresh face seem typically Nordic. “We worked with our archive of 3,500 prints and chose 18 of our most iconic designs. They exude joy and beauty.”