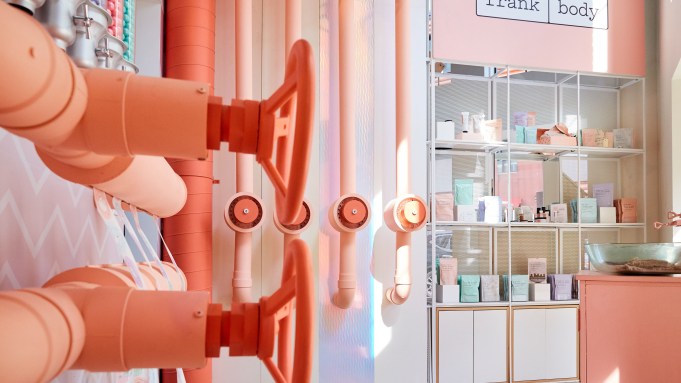 To market, to market they go.

Marketplaces are the retail industry’s shiny new thing. Partly a function of the real estate market, like pop-up shops, marketplaces are sprouting at a time when there remains a glut of available space driving down asking rents and landlords willing to deal. There are many variations on the theme, but the concept is catching on — with retail operators and investors.

Today’s marketplaces are antecedents to some of the world’s first forums, including Athens’ Agora, where in 6th-century B.C.E. merchants and consumers haggled over goods, and the Grand Bazaar of Istanbul, which began operating in the 15th century. The modern marketplaces generally feature between eight and 30 emerging or digitally native brands — or both — often with a food and beverage component.

Marketplaces owe a debt to food halls, with their stalls devoted to different chefs, restaurant to-go menus, bakers, candy makers and more, and have even been dubbed “food halls for products” by some experts. The projects vary in size and assortment. Some are big both in size and operators’ ambitions.

Neighborhood Goods, a 13,000-square-foot marketplace in Plano, Tex., recently raised $8.8 million in additional seed money, bringing the total venture round to $14.5 million. Cofounder Matthew Alexander revealed, “We’re planning to open our second location later this year in New York. We’re running full steam ahead on that project. We’re working on a number of locations this year and next.”

The four level, 14,000-square-foot Showfields at 11 Bond Street in Manhattan, which opens today, defies categorization, according to cofounder Tal Zvi Nathanel, yet it clearly has many marketplace elements, along with some twists. “Every time someone invents a category, people put them in boxes,” he said. “We think we own a new category. It’s crazy, traditional retail is a $6 billion industry, and it’s stagnant. E-commerce is $600 billion. We sit somewhere in the middle as new retail. It’s about community, experimental, omnichannel and constantly changing.”

Nathanel, who sounds an aggressive note about the business, believes Showfields can open 500 marketplaces worldwide. “The reason I say 500 is to stress the point that the problem with retail is global,” he said. “Brands are trying very hard to get into the game. If the problem is global, there’s a need for Showfields in every tier-one city.”

Showfields is housed in a 106-year-old building designated a landmark by the Landmark and Preservation Commission, which made developing the property into the marketplace more difficult. “The challenges with this building made us think we can do it more easily,” Nathanel said. “We’re already mapping for different markets to see which one we’re going to open by the end of the year.”

There’s no prevailing  business model when it comes to marketplaces. Some operators take a percentage of sales, while others charge a membership fee for the time the brand is in residence, or a combination of both. Nathanel said that charging a membership fee creates a sort of natural selection that will weed out weak players. If brands aren’t selling, they won’t be able to afford the fee.

“We imagined what a retail concept would look like with a lower barrier to entry for direct-to-consumer brands,” said Alexander, adding that spaces and financial arrangements are different for every brand. “The length of a brand’s tenure varies. We’re offering them a really easy way to come in with a more integrated blended area. We’re looking to extend the time of brands that are doing well. Serena Williams is the only brand from the first wave that moved out. Stadium Goods is completely overhauling its area.” Alexander said a number of brands were scheduled to leave Neighborhood Goods by now, but opted to stay. “They’ve fortunately been doing well.”

Naked Retail Group, a partnership between Justin Kerzner, creator of Upton Belts; Bruce Gifford, founder of Naked Cashmere, and Brandon Charnas, cofounder of Current Real Estate Advisors and the husband of Something Navy’s Arielle Charnas — is another example of the new business model. The company leases short-term space to digitally native brands, grouping them by category, as it did with beauty brands Kosås and Briogeo, which were touted by Charnas, and Brooklinen, which also got a shoutout from the Something Navy influencer.

“It was meant to be more than our own brand,” Kerzner said. “The idea was that we’d design the space for other brands, staff it and share in the marketing. That way it would make our store more impactful. In the first few months, we had 20 brands, usually one at a time. We’d rebuild the store every three to five days.”

Bulletin, a venture backed by the Y Combinator with two locations in New York City, operates three units at 145 Wythe Street in Brooklyn, 27 Prince Street in NoLITa, and a 1,500-square-foot flagship at 863 Broadway near Union Square. The company said it has lowered the barrier to entry for digital brands through its membership-based retail model that allows brands to rent — in this case — shelf space for their products and benefit from the real-time sales data Bulletin provides.

Some of the marketplaces have begun offering different services or a menu thereof. Naked Retail designs the spaces for brands. Dreams on Air provides marketing and public relations expertise and showroom staffing for emerging luxury designers. The company acts like an incubator, advising and consulting on fashion brands on growth, development, social media, marketing and branding.

Even though it’s outside their main area of expertise, the marketplace concept seems to be an attractive way to enter brick-and-mortar retailing. It may hold less risk since the operator collects fees or a portion of sales spread across product categories and vendors. If one area is less popular, both operator and brand can quickly pivot because they aren’t locked into long leases such as department stores have with hard shops and concessions.

When JLL unveiled Rose and Loon in Minneapolis in September, Bill Moston, its senior vice president of national retail development, said, “It’s an actual brand, an actual working, functioning retailer. We’re curating the whole mix of merchandise. We spend a lot of time trying to figure out who the right makers and artisans are that will resonate with the customer, and we have a central POS system. This is not meant to be a cluster of pop-ups.”

Free Market, an 11,000-square-foot marketplace concept is opening in the new Dairy Block micro-district of downtown Denver in the spring with brands such as Jenni Kayne, AYR, Aesop, Alchemy Works, Westerlind, Clare V, Beautycounter, Rosemont Barber Shop and Fortuna Chocolate. A 27,000-square-foot unit will bow at the Playa Vista Runway in Los Angeles later this year.

“We wanted to focus on strong brands in each category and give them space to do their things,” said Raan Parton, who cofounded Free Market with his wife, Lindsay. “We’ve had a little bit of an allergic reaction to luxury brands. We’re focused on brands that bring a lot of value to consumers and have strong values.”

The altruistic nature of some marketplaces extends to community events such as Showfields’ third floor, which is given over for a limited time to an exhibition of more than 15 artists such as Manuel Rangel, Pilpeled, Pac Interactive, Slave of Light and Dante Dentoni, who designed immersive works. The fourth floor, which is designed to look like a NoHo loft apartment with a roof deck, will be used for community programming during store hours, switching over to an invite-only residence for creators and their communities, a place for Showfields’ brands to host their online communities.

Free Market hopes to become a cultural hub when it opens in Denver. Common areas will be used for gallery installations, performance stages, panel sets and classrooms. “The ability to build a community f brands with strong, aligned values is our way of standing out in the cluttered retail space,” said Lindsay Parton.

Alexander of Neighborhood Goods discussed the differences between the inaugural Plano location and the upcoming New York store. “We have direct-to-consumer brands in Plano, and we’re also doing some more established industry brands. We’re starting to have conversations, with the ones that have done particularly well, about branching out. The goal is to have a different mix of brands in each location we open; however, it will be relevant to each market.

“We’re starting to dig into what that launch would look like,” Alexander continued. “[The space] will be a little bit smaller, with the same amount, if not more brands. We’ll have over 30 brands.”

Neighborhood Goods’ goal is to keep brands “with us for a minimum of three months. We’ve had a few extend terms. We want more integrated brand experiences,” Alexander said, referring to brands that are sold in several locations within the space. “Some brands are sold all over the room and integrated in different ways. We have 15 brands with fully built-out areas. In New York, there will be potentially more. We’ll have 15 discreet areas ranging from 100 square feet to 500 square feet. As a result, we’ll have a handful of fixtures and others with one fixture.

“We call ourselves a department store, which is relatively inaccurate,” he continued. “We have a kids area, men’s contemporary apparel and women’s area. We’re starting to think about having anchor areas around beauty, men’s, women’s, kids. We’ll try to have a general balance between all those categories. In Plano kids and women’s wear are big opportunity. Women’s will be a big focus area.”