The marketplace experience remains open through Aug. 16 in the center’s Jewel Court. 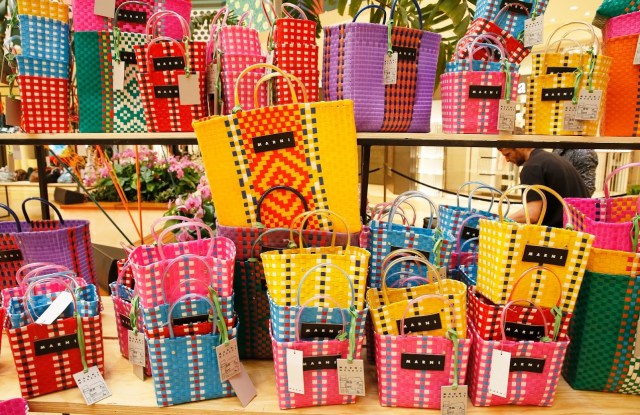 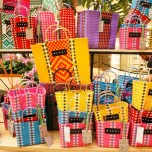 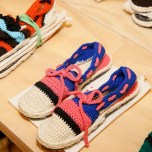 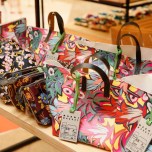 The quirky traveling bazaar experience that is Marni Market has made its way to the U.S.

Thursday evening was a colorful dual celebration of sorts as Marni helped celebrate South Coast Plaza’s yearlong 50th anniversary celebration while simultaneously introducing the U.S. to its pop-up marketplace for a two-week run through Aug. 16. Marni Market is exclusively at the Orange County shopping center.

“This was the greatest occasion because we wanted to really celebrate the 50th anniversary of South Coast Plaza,” said Monica Voltolina, who serves as Marni U.S. chief executive officer and ceo of Marni licensor Staff USA Inc. Marni and Staff share a parent in OTB.

The market, inspired by the company’s flower markets, is filled with handwoven toys and furniture, espadrilles, vase holders and other colorful items made in Colombia. A portion of the proceeds from sales at Marni Market and its regular South Coast Plaza store will go to the Festival of Children Foundation, a nonprofit aimed at being a support system for other charities focused on children by providing those groups with financial aid and helping them raise awareness.

Also fitting is the market concept, aimed at serving as a twist on traditional retail and particularly timely as the broader industry looks to find firmer footing in a changing landscape.

The first market, held in Milan in 2015 to celebrate Marni’s 20th anniversary, was modeled after a traditional outdoor flower market and has since traveled to places such as Japan and Hong Kong.

“The whole idea really started with the idea of the flowers. It’s a market where you sell the flowers and that was the beginning,” Voltolina said. “The reality is the market is evolving, but it’s also the experience that we want to give to the consumer. It’s important, for us, the consumer live and experience and understand the brand from a different perspective and not just from the experience of buying in the store so I think Marni is great for that.”

True to the Marni brand, South Coast’s Jewel Court is wrapped in bold textile prints and colors for the market. The point, Voltolina, said is to “have adults and young kids interact. It’s a playful experience.”

The pop-up, when it completes its run at South Coast, will travel back to Europe with the next location yet to be determined. The company in April brought Marni Market online for the first time. The online experiment went well, Voltolina said, but it was lacking in the physical interaction that in-real-life pop-ups afford customers.

As for more permanent stores, it appears the company may have enough for now in the U.S. Voltolina cited the existing fleet and the recently opened San Francisco door saying “we are very happy with that.”

Marni continues to dabble in other twists on traditional retail with pop-ups around the world. Whether or not the company has more experimental concepts up its sleeves remains to be seen.

“Maybe it will be a surprise,” Voltolina said smiling. “I feel the beauty is really to experiment and a brand like this allows you to do that.”